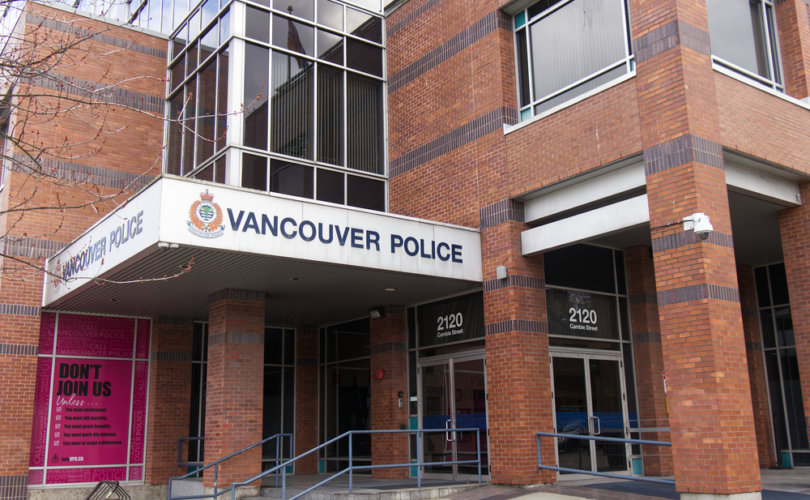 VANCOUVER, British Columbia (LifeSiteNews) — The Vancouver Police Board upheld its decision to allow unvaccinated workers to keep their jobs so long as they agree to frequent self-paid testing.

The Vancouver Police Department (VPD) on Thursday made the determination that it would continue its policy to “accommodate” unvaccinated employees by allowing them to opt for testing rather than forcing them to take the experimental jab or be terminated. The review of the policy came after three citizens wrote to the VPD to express their “disappointment” with the board for not making vaccination against COVID-19 outright compulsory as a condition of employment.

While the move to “accommodate” the unvaccinated is less harsh than mandates imposed by many other police forces in Canada, such as the Ontario Provincial Police and the Royal Canadian Mounted Police, the VPD did clarify that employees must test “on their own time and at their own cost,” and the accommodation only applies to those already employed by the VPD. In effect, anybody hired by the VPD going forward will still be required to have the shots.

The legality of vaccine mandates in workplaces has been questioned by top Canadian employment lawyers, especially in regard to union workers who normally have immense bargaining power over the terms of their employment contracts. While mandatory testing is often considered less of an affront to personal freedom than mandatory injection, even it has been decried by some legal experts as a violation of the Genetic Non-Discrimination Act as outlined in the Criminal Code of Canada.

“It is a criminal offence punishable by fine, and a maximum of five years in jail, for anyone to conduct a DNA or RNA test to determine whether or not that person is susceptible to transmitting a disease,” stated constitutional rights lawyer Rocco Galati when explaining the legal implications of the act. “Well, isn’t that the PCR test? Isn’t it all the tests they’re conducting for COVID?”

The three complaints that served as the impetus for the VPD to review its policy came from just three citizens in a city with a population of over 600,000 people. The complaints referenced “public safety” and the “public’s best interest” when expressing their concern that not all VPD employees would be jabbed.

According to a growing body of data, vaccine mandates and passports are a failed strategy for tackling COVID, as coronavirus vaccine trials have never produced evidence that the vaccines stop infection or transmission. They do not even claim to reduce hospitalization, but the measurement of success is in preventing severe symptoms of COVID-19 disease.

Moreover, there is strong evidence that the “vaccinated” are just as likely to carry and transmit the virus as the unvaccinated, leading many experts to consider mandates not only unnecessary, but actually harmful in light of the thousands of reported deaths and millions of injuries linked to the shots.

Many consider mandates a gross assault on individual freedoms that’s unnecessary given COVID-19’s high survivability among most groups, its now understood minimal risk of asymptomatic spread, and research indicating that post-infection natural immunity is far superior to vaccine-induced immunity.

As affirmed by Peter McCullough, M.D., leading expert on the early treatment for COVID-19, “[For] people under 50 who fundamentally have no health risks, there’s no scientific rationale for them to ever become vaccinated” against COVID-19.