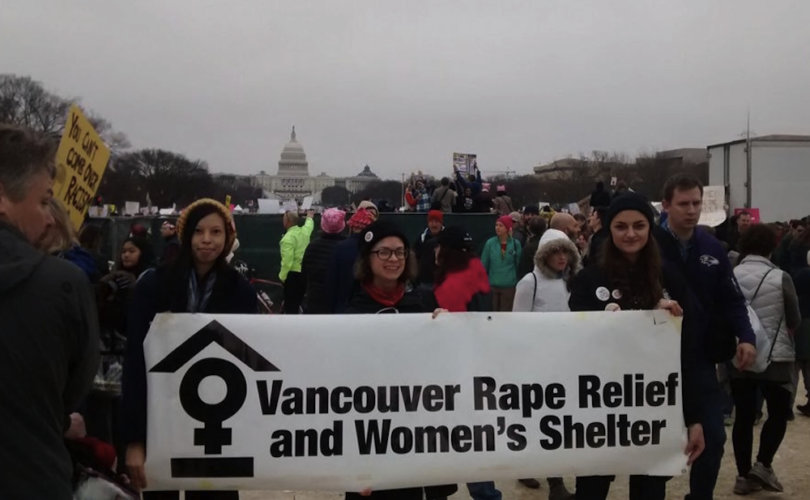 Vancouver Rape Relief and Women’s Shelter, run by a pro-abortion and pro-lesbianism feminist collective, said it has suffered discrimination “in the guise of inclusivity” and the city’s decision “is intended to coerce us to change our position and practice of offering some of our core services only to women who are born female,” the National Post reported.

Vancouver city council voted March 14 to cut almost $34,000 in annual grants that Vancouver Rape Relief uses for educational outreach programs “until such time as the organization makes changes to become aligned with … City policies,” it reported.

Most of the organization’s more than $1 million annual budget is funded by the province of British Columbia.

The center has had “a one-year grace period to catch up to Canada's discrimination laws,” tweeted Oger, who has also launched a human rights complaint against Christian activist Bill Whatcott.

While the “trans community” and allies lauded the decision, others described it as yet more oppression of women.

“Countless vulnerable women are at risk of being left without support in the aftermath of male violence. Only the worst kind of misogynist could see that as a positive outcome.”

In 2012, a man claiming to be a transgender “woman” sexually assaulted several women in two Toronto women’s shelters, and in a similar case, a biologically male rapist who “identifies” as a woman was accused in September 2018 of sexually assaulting four women inmates after being transferred to an all-female facility.

Vancouver Rape Relief, which bans men from all spaces it operates, contends that it has the legal right to deny core services, such as peer counseling, shelter and transition homes, to biological males identifying as women.

It won the right to do so after a 12-year legal battle with Kimberley Nixon, a man who identifies as a woman and has had sex reassignment surgery.

Nixon brought a human rights complaint against Vancouver Rape Relief after it refused to let him volunteer as a crisis counselor. The B.C. appeals court threw the case out in 2005, and the Supreme Court declined to hear it two years later.

That was echoed by lawyer Gwen Landolt, vice president of REAL Women of Canada, who dismissed the current situation as “absurd.”

Nixon “was obviously male, he was over 6 feet tall, with broad shoulders, large hands and feet, and Vancouver Rape Relief said women who have been violated are obviously terrified,” she recalled.

“What this is trying to do is make legitimate a fantasy that somebody can change their gender,” Landolt told LifeSiteNews.

As psychiatrist Dr. Paul McHugh of Baltimore’s Johns Hopkins University said, “You don’t tell a woman with anorexia she’s too fat, you tell her the truth, you have to eat and be normal,” Landolt said.

“You should be saying exactly the same thing to transgenders,” she said. “You are not transgendered. You are what you are.”

Nevertheless, Vancouver Rape Relief has long been attacked as “transphobic,” an allegation repeated by city councillor Christine Boyle, who tweeted after the recent vote the organization is “supporting transphobia.”

The B.C. Federation of Labour has directed its affiliates to boycott the organization, and the Native Youth Sexual Health Network has accused it of being run by “TERFs” (trans-exclusionary-radical feminists) and called for it to be closed down.

The National Post reported that the 2017 opening of the Vancouver Women’s Library, which has links to Vancouver Rape Relief, was disrupted by protesters handing out pamphlets stating “this library is run by women who hate other women.”

Vancouver Rape Relief representative Hilla Kerner told a city committee last week that while trans “women” have the right to support, their “lived experience” is different from that of a woman who is born female, the National Post reported.

“We do not have the experience to offer services to people without the same life experience … this is not our work,” Kerner said.

“Because we are an oppressed group who fights for equality, we have a right to decide who are membership is and who we serve,” she said.

“What we are saying is: If you were born a female, you are doomed,” Kerns told the senate committee then.

“You are doomed in our society to be second-class. You do not have the privilege of growing as a male and have a choice to choose to be a woman. Surely, you cannot say these are the same thing.”