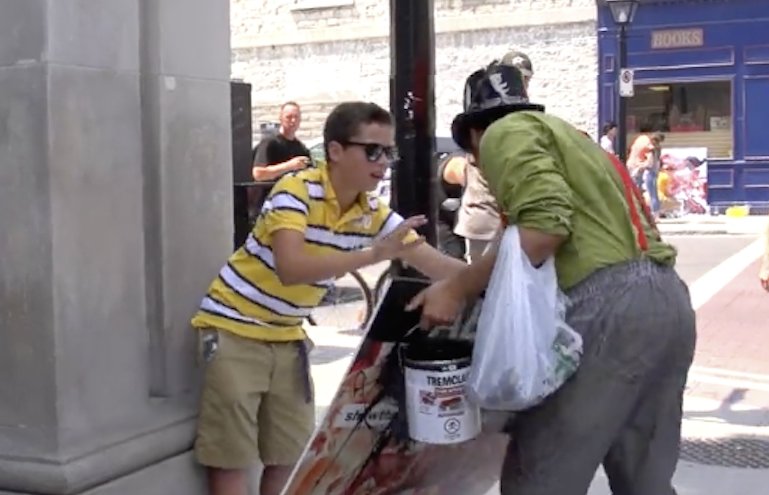 Video of the July 7 incident captured by Kingston’s Station14 shows a man dressed in a green shirt, red suspenders, and wearing a black top hat smearing a sign with black paint from a gallon bucket of Tremclad.

“He went crazy. He slapped thick whacks of paint and basically destroyed eight signs,” said Vince Gedge of Show The Truth to LifeSiteNews. Gedge estimated the damage to be over $1,000.

Kingston Police confirmed with LifeSiteNews that the man was charged with “mischief” under $5,000 for “spraying paint” on the signs. “He was arrested, charged, and later released on a promise to appear […] with a future court date,” a spokesperson said.

Gedge said the pro-life group hopes to receive restitution for their destroyed signs. Kingston police where not able to confirm what date the vandal was to appear in court.

Show the Truth uses larger-than-life abortion victim photography in city cores and busy intersections to convince the public of the injustice and horror of abortion. “Our strategy is to show the images of aborted children to the public in the form of large signs depicting first and second trimester abortions,” the group states on its website.

The group constantly receives affirmations that their work is changing hearts and saving lives.

“We get a lot of support,” said Show the Truth volunteer Joe Bissonnette to LifeSiteNews, adding that “good things” happen all the time.

Bissonnette related a few stories about people who approached him while holding a billboard to tell him they decided to not go through with an abortion after seeing the billboards.

“We know that there are babies who are alive today because of what we are doing,” he said.

Many passersby often express discomfort and even outrage at seeing the graphic images of aborted babies, but Show the Truth volunteers respond that one of the best ways to end an injustice is to show it for what is really is.

“We show these images because abortion is a violent act that kills a preborn child, and thus is a human rights violation. In the past, human rights activists (like the anti-slavery abolitionists, anti-child labour activists, black civil rights leaders, etc.) used graphic imagery to convey the true horror of their respective injustice that they were fighting against. The best way to stop an injustice, is to show the victims of that injustice,” the group stated in a recent Facebook post responding to criticism.

Kingston police had to issue a statement on Facebook and Twitter July 7 that the pro-life demonstration was legal, urging people to stop reporting it.

“We are receiving numerous calls regarding ‘Pro-life’ or ‘Anti-Abortion’ protests happening around the city. We are aware of the activity, and the graphic nature of the images on display. To this end, we have sought a legal opinion from the Kingston Crown Attorney, which advises that this conduct is not an offence under law, and is protected by the Charter of Rights and Freedoms, specifically freedom of expression. We are aware that some may find these protests offensive, but we would kindly ask that you refrain from calling police to report,” the post stated.

To the criticism that children seeing the images will be traumatized, Show the Truth responds that saving children from the “dismemberment that happens to them through abortion trumps the rights of anyone to 'not be shocked'. Abortion is much more traumatic to the preborn child (who is literally ripped apart in utero) than images of aborted victims could ever be to born children.”

Gedge told LifeSiteNews that the injustice of abortion showcased on the billboards can only be stopped when people make a stand.

“The only way to overcome it is to be out front doing something about it,” he said.

Show the Truth will be back on streets beginning August 3-14 for its annual summer tour with a mission to “show the Canadian public the visual reality of abortion.”