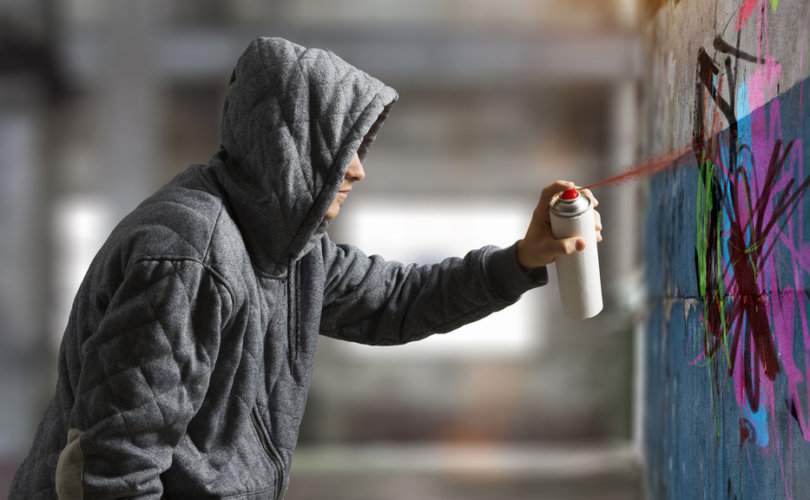 VANCOUVER, British Columbia (LifeSiteNews) – A woman who pleaded guilty to vandalizing a Vancouver Catholic church with paint received a conditional discharge, meaning she will walk free with no criminal record and instead pay a $1,250 fine and write an apology to the church.

According to the National Post, on July 1, 2021, 27-year-old Emily Luba and her twin sister were found tossing orange paint at St. Jude’s Parish in Vancouver.

Witnesses tried to stop the incident, which took place a month after the Tk’emlúps te Secwe̓pemc first nations said there was a “probable” discovery of unmarked graves.

According to court records, one of the vandals “was wearing a jacket that had the words, ‘The Church is Complicit’ written on the back.”

Luba’s apology to St. Jude’s Catholic Parish in Vancouver, the church she vandalized, must only be 500 words.

Hate crimes in Canada do carry the possibility of jail time, but the court agreed with Luba’s lawyer that “the discharge is in the best interest of society and the individual.”

A Vancouver Police investigation into the incident showed that orange paint was spread on the church walls and doors and a church banner was vandalized with painted hand prints.

“The (police) were able to trace the paint left at the church back to Home Depot, where it was determined that the accused’s sister had purchased paint,” the court ruling said.

Luba’s sister, who is not named in the court ruling, received a conditional discharge as well.

After the discovery of unmarked graves at now-closed residential schools once run by the Church in parts of Canada in the spring of last year, nearly 100 churches, most of them Catholic, have either been burned or vandalized.

Canadian Prime Minister Justin Trudeau last year waited weeks before acknowledging the church vandalism, and when he did speak, he said it is “understandable” that churches have been burned, also saying it is “unacceptable and wrong.”  He later also demanded that Pope Francis apologize.

In early July, Gerald Butts, a former adviser and close friend to Trudeau, was called out for saying the recent rash of arson and vandalism attacks on mostly Catholic churches are “understandable.”

This past Friday in Rome, Pope Francis, with several Canadian bishops at his side, issued an apology for the Canadian church’s role in Canada’s residential school system, saying he felt “shame” and “indignation.”

Canada’s Residential School system was a structure of boarding schools funded by the Canadian government that ran from the late 19th century until the last school closed in 1996.

Some schools were run by Catholic religious orders who had settled in Canada. While there were indeed some Catholics who committed serious abuses against native children, the past wrongs led to anti-Catholic sentiment, which exploded last summer after the discovery of “unmarked” graves in Kamloops, British Columbia.

However, the mainstream media ran with the claims that hundreds of children were buried and disregarded by Catholic priests and nuns who ran some of the schools.

This resulted in mass church burnings across Canada.

Also, the death records themselves from the Residential Schools after a government investigation showed that the unmarked graves where burials took place were claimed to have been accounted for and were not exclusively used for only native Canadians.