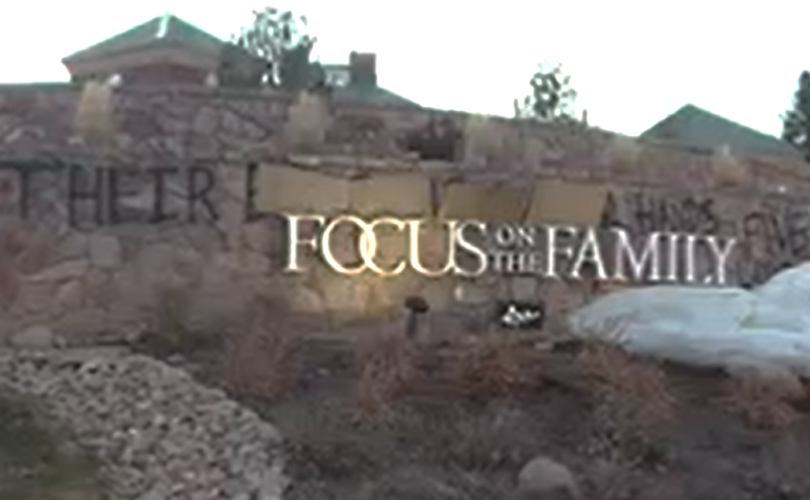 (LifeSiteNews) — A Christian and pro-life organization in Colorado was vandalized last week by unidentified individuals who claimed that the tragic deaths of five people during a recent shooting was the result of pro-lifers’ alleged hate of those who “identify” as members of the LGBT community.

A mass shooting on November 19 took place at LGBT nightclub Club Q, killing five people and injuring 19. Less than a week later, on Thanksgiving Day, vandals left unsettling graffiti messages outside the Focus on the Family headquarters. Both buildings are located in Colorado Springs.

Despite the recent revelation that the shooter, later identified as 22-year-old Anderson Lee Aldrich, “identifies” as “non-binary” and a member of the LGBT community, the pro-life organization was presented as a potentially responsible party.

The Colorado Springs Gazette reported that the graffiti contained messages that read “their blood is on your hands” and “five lives taken.” A sheet of plastic has since been put over the sign to cover the graffiti. Local police confirmed that they had no further information about the incident or suspects as of November 26.

“We recognize the community is hurting in the aftermath of the reckless and violent actions of a very disturbed individual,” Jim Daly, president of Focus on the Family, told LifeSiteNews in a statement. “This is a time for prayer, grieving and healing, not vandalism and the spreading of hate. Focus on the Family is privileged to be one of many organizations in our city positioned to help and support the needs of struggling individuals and families. The families of the five individuals killed in Saturday night’s senseless attack are in our prayers.”

“We urge everyone to pray for peace and we also pray for the individual or group responsible for this mischievous and unwarranted defacing of our ministry’s property.”

The vandalism is the latest act of violence directed toward pro-life organizations and follows a series of similar actions over the past few months, sparked by the historic overturning of Roe v. Wade. Although federal law enforcement has opened an investigation into these attacks, the FBI has not yet revealed whether any arrests have been made.

However, because the pro-life position stands in opposition to the LGBT agenda, it is often misinterpreted as hate for gender-confused individuals and has caused pro-LGBT groups to vandalize pro-life organizations.

The state of Colorado has previously enabled various forms of progressive sex education, introducing false narratives to its youngest citizens. In 2021, a public school teacher was investigated by his district and forced to complete a program titled “Gender Inclusion 101” because he referred to the increasing number of “transgender” children as a trend and dared to say that some minors regret their decisions to “transition.”

More recently, school officials in Jefferson County denied that students were “identifying” as animals and dressing up as so-called “furries” in schools, pushing the concept of gender ideology to alarming lengths.