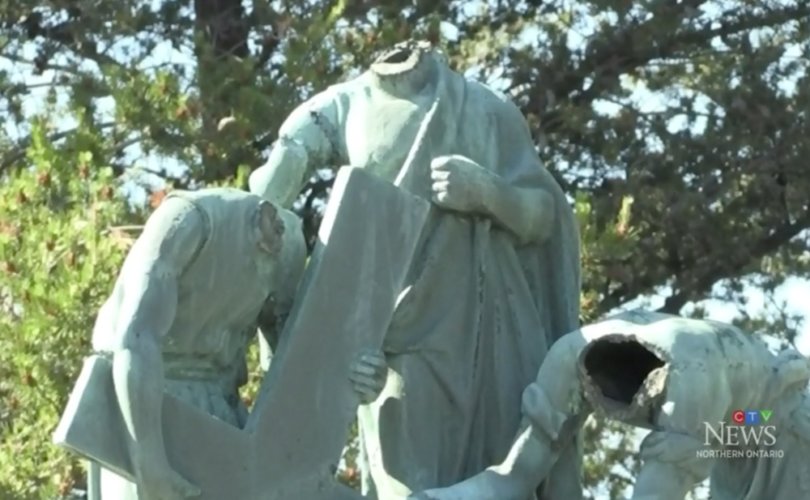 SUDBURY, Ontario, July 6, 2020 (LifeSiteNews) –  Vandals used power saws and grinders to behead Catholic bronze religious statues in broad daylight in a grotto in the Roman Catholic Diocese of Sault Ste. Marie in Ontario. While the crime occurred back in May, it has only recently been made public.

The Sudbury Star reported on June 28 that local police confirmed to them that on May 22, vandals beheaded eight statues at the historic Stations of the Cross at the Grotto of Our Lady of Lourdes in Sudbury, Ontario.

The crime happened in broad daylight, between the hours of 1 to 6 p.m., and as of today, the Greater Sudbury Police Service (GSPS) still has no suspects. The destruction of the statues occurred a few days prior to the killing of George Floyd while in police custody and appears to be unrelated to current events in the U.S. where mobs are destroying statues of historical figures, some of them saints.

LifeSiteNews reached out to the Roman Catholic Diocese of Sault Ste. Marie, asking them to explain why it took them so long to make the crime public.

David Sirois, who serves as the assistant financial administrator with the diocese told LifeSiteNews that the long delay in making the crime known was done because they did not want “public knowledge” to interfere with the police investigation.

“We did not want public knowledge to interfere with the GSPS investigation, that is why it wasn’t provided to the media until the GSPS arrived at a standstill,” Sirois told LifeSiteNews.

Sirois said in the Sudbury Star report that the thugs used power saws and grinders to cleanly decapitate statues at stations at the Grotto of Our Lady of Lourdes.

Sirois told the Sudbury Star that stations six to 11 were damaged and that vandals also cut halfway through the legs on one statue, and arms were also broken off on some. He said the crime was reported to the GSPS right away.

LifeSiteNews contacted the GSPS to ask them about the incident, as well as why it took so long for the public to become aware of the vandalism to the statues.

Sarah Kaelas, who works in Corporate Communications with the GSPS, told LifeSiteNews that the delay in making the crime public was due to investigators wanting time to explore leads.

“It wasn’t made public immediately as investigators wanted to explore any and all leads first,” Kaelas told LifeSiteNews.

Kaelas added that the investigation is “ongoing” despite the fact the case has been open for over a month.

“Due to the fact that there was no video surveillance or eyewitnesses at the scene, we do not yet have any suspects or leads at the moment but we continue to work diligently to hold the vandals accountable,” Kaelas told LifeSiteNews.

Kaelas also said that the GSPS is taking the investigation “seriously” and they realize the “historical value of the statues.

“The GSPS recognizes the great historical value and community significance of these religious statues, and we are taking this incident very seriously,” Kaelas told LifeSiteNews.

She added that the crime has been “reassigned to our break enter and robbery unit, which falls under our criminal investigation division.”

Rebel News media reporter Sheila Gunn Reid reported on the vandalism to the grotto statues, and called into question why the crime is not being considered a “hate crime.”

“Not just vandalized. BEHEADED. How do you behead a statue? That requires some planning and forethought and some serious tools brought to the scene of the crime….Hardly seems like a spur of the moment drunken prank to me,” wrote Reid.

“So not a religiously-motivated hate crime? Just plain old mischief? Wonder why that is? Or why police are already making that determination before they even have a suspect?”

The Sudbury Stations of the Cross were vandalized before protests began in the U.S., which started on May 25 after George Floyd was killed at the hands of a Minneapolis police officer.

Floyd’s death sparked riots and violent protests in the U.S. and in recent weeks, there has been an increase in acts of violence against both historic and religious statues.

As for the statues in Sudbury, the diocese is in charge of caretaking for the statues. Sirois told the CBC in a report they are hoping to repair them with the help of a local artist, and are working with their insurance company to see if this is possible.

“Right now we're looking at different companies and artists that might be able to basically re-work with what's there now,” Sirois said in the CBC report.

“We could hopefully get them back by before the season next year, I'd say April or May of next year.”

The Grotto of Our Lady of Lourdes in Sudbury was built in 1907. Local landowner and devout Catholic Frederic Romanet du Caillaud, lived in the area for over a decade. According to a document put together by the grotto keepers, it is said Romanet had the grotto built after his wife became very ill and he prayed for Mary’s intercession to heal her.

Romanet was a native of Limoges, France, and the grotto, which was commissioned from the Denonville Founderie in France, stands at 20 feet.

The statues of walkable Stations of the Cross in Sudbury were put in place in 1954, and the site is taken care of by the Friends of the Grotto volunteer group, with the diocese overseeing the site.

Reward offered for information leading to arrest of suspects

The Sudbury Rainbow Crime Stoppers, in collaboration with Sudbury businessman and philanthropist Gerry Lougheed, and the GSPS, are offering a guaranteed minimum $1,000 reward for any tips they receive regarding the crime.

The tips must be sent to police before midnight on Thursday, July 16th, 2020, and the reward payout will be given so long as the information leads to help identify those responsible for the crime.

“The desecration of these sacred statues in our community is very sad, troubling, and totally unacceptable,” Gerry was quoted as saying in a news release in regard to the vandalism of the statues.

The GSPS said the persons responsible will be charged with mischief and that restitution would be asked for.