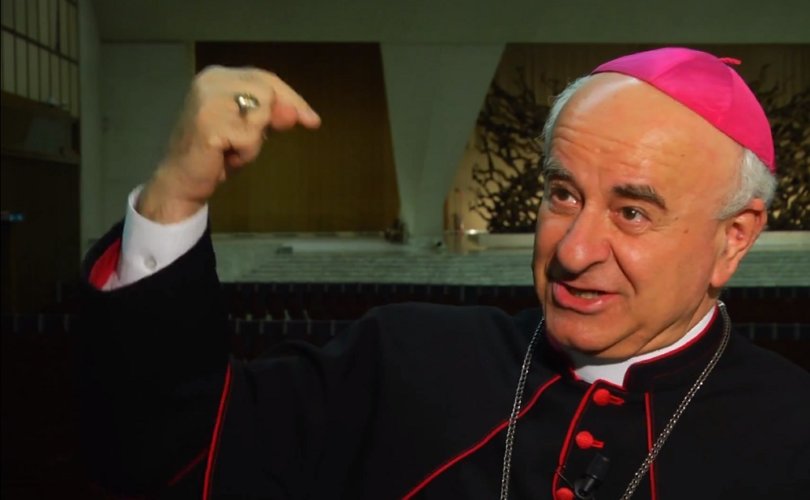 ROME, Italy, August 4, 2020 (LifeSiteNews) – The Vatican has defended one of its recently released documents on the coronavirus pandemic that didn’t mention God as an effort to reach “the widest possible audience.” The 8-page “Humana Communitas in the Age of Pandemic: Untimely Meditations on Life’s Rebirth” was published by the Pontifical Academy for Life on July 22.

“We are interested in entering into human situations, reading them in the light of faith, and in a way that speaks to the widest possible audience, to believers and non-believers, to all men and women ‘of good will,’” said Fabrizio Mastrofini, a spokesman of the Pontifical Academy for Life.

“I do not know, at this point, whether a philological ‘accounting’ work on how many times a few key words recur in a text is useful,” Mastrofini said in response to an article published by New Daily Compass on July 31 (Italian: July 28).

“Your readers are entitled to know something else: the criticism of the lack of the terms God, faith, religion, was first put forward by an American website, then repeated by Spanish websites, and finally also in Italy by some passionate blogger,” he pointed out, failing to explain how that fact was of any relevance.

Phil Lawler of Catholic Word News had called the document shortly after its release on July 22 a “shocking Vatican perspective on the pandemic” and “an embarrassment to the Catholic faithful.”

According to Lawler, a well-respected Catholic journalist, even the title of the document “is misleading; the document provides very little hard information. But I will grant this much: it is ‘untimely.’ There is never a good time for this sort of vapid rumination.”

“Despite stretching to well over 4,000 words, the Vatican document does not mention God, Jesus Christ, the Holy Spirit, the Church, the sacraments, prayer, or even charity; even the word ‘Christian’ does not appear in the text,” Lawler summarized. “There is admittedly a call for ‘moral conversion,’ but in context it is clearly a call for an ideological rather than religious conversion.”

He said that the Vatican should send a Christian message – which he suggested would have happened in times past, when “the Pontifical Academy for Life might have urged us not to be paralyzed by fear of sickness and death, nor to regard any interaction with neighbors as a dangerous imposition.”

While the document “makes a weak gesture in that direction,” it does not offer practical advice for regular Catholics, instead making “a grandiose call for worldwide solidarity and international cooperation, stipulating that the World Health Organization should have a ‘privileged place’ in the campaign.”

Doyen Nguyen, a lay Dominican and professor, also criticized the document in a July 29 piece published on LifeSiteNews.

“Nowhere in the document is it mentioned that God is our final end, that Christ is our hope, and that we need the grace of the Holy Spirit for both our moral conversion and a good moral life. Nowhere is the Church – the dispenser of the sacraments as a source of grace – mentioned either. In passing over these in silence, in what way does the Academy’s call for solidarity, equality, and ‘access (to health care) for all without exceptions’ differ from that of secular ideologies? This is a document issued from a prestigious body of the Catholic Church, yet there is no mention of Christianity or Christians, let alone Catholics. That a document is destined for all men and women is certainly not a reason for bracketing out its Catholic identity or omitting any reference to God, Christ, the Holy Spirit, and the Church,” she wrote.

The Pontifical Academy flatters me. But really, they didn't need my help to produce confusion. Their own document did the job nicely. https://t.co/83W3HIwDgZ

“Humana Communitas,” the document of the Pontifical Academy for Life, indeed stressed that only a global response would be sufficient, discounting calls for subsidiarity.

“Deeply rooted in its mission to lead international health work is the notion that only the commitment of governments in a global synergy can protect, foster, and make effective a universal right to the highest attainable standard of health,” the Academy wrote. “This crisis emphasizes how much is needed an international organization with a global outreach, including specifically the needs and concerns of less developed countries coping with an unprecedented catastrophe.”

On the other hand, the document referred to governments trying to protect their population from the virus with accusations of “narrow mindedness of national self-interests,” having led to “a policy of independence and isolation from the rest of the world, as if a pandemic could be faced without a coordinated global strategy.”

“Such an attitude might pay lip service to the idea of subsidiarity, and the importance of a strategic intervention based on the claim of a lower authority taking precedence over any higher one, more distant from the local situation,” the document continued. “In reality, the attitude in question feeds into a logic of separation that is, to begin, less effective against Covid-19.”

Archbishop Vincenzo Paglia was nominated by Pope Francis to head the Pontifical Academy for Life in 2016, following the removal of all previous members of the institution founded in 1994. At the same time, new statutes were imposed on the Academy, no longer requiring members to defend life in accordance with Catholic teaching.

In an interview, Paglia doubled down on the alleged importance of the pro-abortion World Health Organization (WHO), saying, “The WHO seems indispensable, even if it certainly had some flaws: we must learn from its failures and improve its functioning. Only in this way can we put into effect the universal right to the highest levels of health care, as an expression of protection of the inalienable dignity of the human person.”

The WHO explicitly states on its website, “Every woman has the recognized human right to decide freely and responsibly without coercion and violence the number, spacing and timing of their children and to have the information and means to do so, and the right to attain the highest standard of sexual and reproductive health (ICPD 1994). Access to legal and safe abortion is essential for the realization of these rights.”

“Contraceptive information and services are fundamental to the health and human rights of all individuals,” according to the WHO.

Gender is defined as “the roles, behaviours, activities, attributes and opportunities that any society considers appropriate for girls and boys, and women and men. Gender interacts with, but is different from, the binary categories of biological sex.”

Writing about “Humana Communitas” for New Daily Compass, Stefano Fontana pointed out, “Just like the preceding document, this one too says nothing: above all it says nothing about life, which is the specific competence of the Pontifical Academy, and it also says nothing Catholic, that is to say anything inspired by the teaching of Our Lord.”

“One wonders who actually writes these documents,” Fontana mused. “From the way these authors write, they seem to be anonymous functionaries of an anonymous institution of sociological studies. Their goal is to coin slogan-phrases in order to capture a snapshot of unspecified processes that are currently underway.”

In fact, Archbishop Paglia expresses himself like that, describing the relationship between the coronavirus and “the exploitation of the planet’s resources” by talking about interdependence.

“Deforestation brings wild animals into contact with human habitats where intensive farming subjects livestock to the logic of industrial production. This is done to meet the demand for meat for export, so that dishes for unbalanced and unsustainable diets can reach our dining tables. All this facilitates the spillover of pathogenic micro-organisms from one species to another, until they affect human beings,” he wrote.

Fontana emphasized that “Humana Communitas” reads like any other document written by secular international institutions or non-governmental organization: “the same abstruse expressions, the same lack of any guiding principles that are not generic, the same winks made to the powers of the world while boasting about defending the weak, the same indecipherable phrases like ‘risk ethics’ or empty rhetorical phrases like ‘coordinated global strategy’ and ‘multi-dimensional ethical challenge.’”

“Conversion is called for, but with respect to the environment and a more widespread solidarity, not as a return to God,” Fontana added. “There is never a call for prayer, because according to the document God can act against the pandemic only through man. The pandemic is seen as a human product, the fruit of man’s disordered relationship with nature, and calls for conversion to new human behaviors.”

Defending the Pontifical Academy for Life’s document, spokesman Fabrizio Mastrofini said there are “three texts that should be read together,” namely the letter “Humana Communitas” by Pope Francis, addressed to the Academy, the document of March 30, and the document of July 22, which took its name from Pope Francis’ letter.

In response, Fontana said “the document of the Pontifical Academy makes the pandemic a problem of ethics and the functioning of institutions.”

“That is too little,” he commented. “Any social agency could understand it that way. To solve [the problem], if it were really only that, there would be no need for Christ, but it would be enough to have willing doctors, European Union money and a government that is not exactly clueless.”

Fontana also called out Mastrofini for his claims the Pontifical Academy for Life wanted to reach “the widest possible audience.” If that really was the case, he argued, the document wouldn’t have used a “strangely sociological style, far removed from a clear Christian language.”

As an example, he quoted, “We emerge from a night of mysterious origins: called into being beyond choice, we come soon to presumption and complaint, asserting as ours what we have only been vouchsafed. Too late do we learn consent to the darkness from which we came, and to which we finally return.”

Archbishop Vincenzo Paglia, the head of the Pontifical Academy for Life and the chancellor of the John Paul II Pontifical Theological Institute for Marriage and Family Sciences, is a highly controversial character in Pope Francis’ Vatican.

In July, Paglia tweeted an image of a naked man and woman lying on the ground surrounded by naked children. Even though Twitter warned, “The following media includes potentially sensitive content,” Paglia defended his tweet.

“Omnia munda mundis” is Latin for, “To the pure, all things are pure.”

Paglia has also claimed, “We must also remember that, for the Catholic Church, if someone says that Judas is in hell, he is a heretic.”