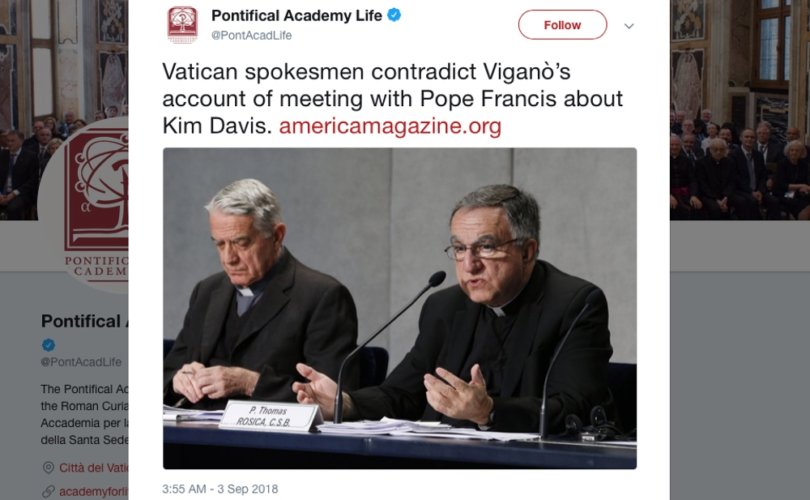 Taking a break from tweets about papal homilies and clean water, the Academy tweeted twice on September 3 about Archbishop Viganò’s testimony concerning Pope Francis’ meeting with Davis. The first tweet, sharing a photo of Fathers Lombardi and Rosica, stated that “Vatican spokesmen contradict Viganò’s account of meeting with Pope Francis about Kim Davis” and linked to the Jesuits’ America magazine.

The second tweet reads: “Father Rosica quoted verbatim the former-nuncio as telling them (speaking in Italian): ‘The Holy Father in his paternal benevolence thanked me for his visit to the USA but also said that I had deceived him [in] bringing that woman to the nunciature.’”

It too featured a photo of Rosica.

Father Rosica quoted verbatim the former-nuncio as telling them (speaking in Italian): “The Holy Father in his paternal benevolence thanked me for his visit to the USA but also said that I had deceived him [in] bringing that woman to the nunciature.” pic.twitter.com/IPInw86b2w

Although both tweets were badly received, the second tweet provoked more ire.

“This is shameful, coming from an agency of the Vatican,” wrote Mari Therese Reyes in response on Twitter. “You’re not doing the Pope any favours [by] doing this.”

“This agency was purged of excellent servants of God and true purpose – by the Pope,” wrote Loretta Westin also on Twitter. “Shameful tweets is all they have. “

Westin was referring to the sweeping changes made to the Pontifical Academy for Life last June. Among the new members is abortion supporter Nigel Biggar. His appointment was defended by the Academy’s new Chair, Archbishop Vincenzo Paglia.

Paglia is himself controversial for the homo-erotic mural he commissioned for his cathedral church. The archbishop is depicted in this painting clinging to a semi-naked man. Viganò named Paglia as one of the “homosexualists” in the Vatican hoping to change doctrine regarding human sexuality.

One Twitter-user thought attacking the former papal nuncio was outside the Academy for Life’s remit.

“What on earth is the Pontifical Academy of Life doing getting involved in the partisan attacks on Viganò?” asked Mary Strow. “You should be solely focusing on your mission of the dignity of every human life. This is disgraceful.”

“Inappropriate to use this account for spin purposes,” agreed Abellana Elisheva.

Others cast doubt on Father Rosica as a credible source of information.