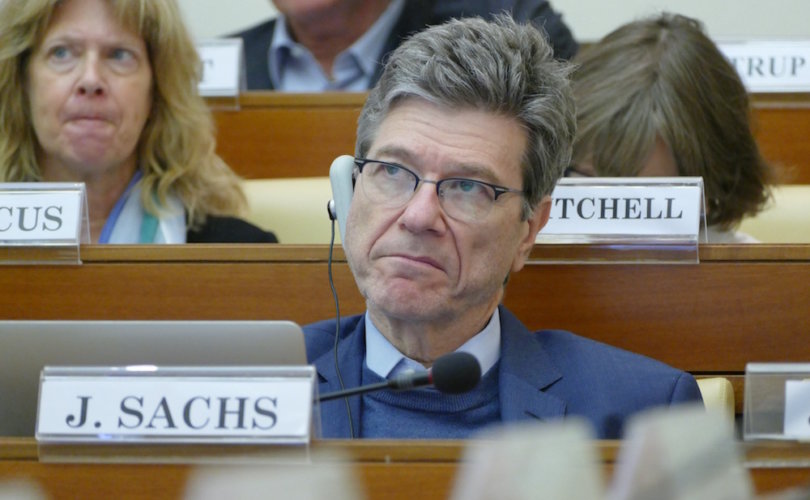 Jeffrey Sachs at the Vatican in November 2017.

ROME, November 6, 2019 (LifeSiteNews) — The Pontifical Academy of Sciences, members of a United Nations network directed by a pro-abortion globalist, and governors of the Pan-Amazonian region have signed a common declaration committing themselves to implementing the UN sustainable development goals (SDGs) in the Amazon.

The Oct. 28 declaration, addressed to Pope Francis and signed at the pontifical academy’s Vatican headquarters one day after the close of the Amazon Synod, consists in 14 pledges to “build together effective solutions for sustainable development of Amazonia.”

Jeffrey Sachs, a pro-abortion globalist and chief architect of the SDGs, who has enjoyed growing influence in the Vatican in recent years, is the director and board member of the Sustainable Development Solutions Network, a global initiative launched by UN Secretary-General Ban Ki-moon in 2012. SDSN-A is the Amazonian branch of the network.

Donors and partners of the SDNA include the pro-abortion, pro-gender theory Bill and Melinda Gates Foundation.

Edward Pentin of the National Catholic Register obtained a copy of the Oct. 28 declaration from the secretary of the Pontifical Academy of Sciences and reported on its contents.

The sustainable development goals include “universal access to sexual and reproductive health-care services, including for family planning, information and education, and the integration of reproductive health into national strategies and programmes.”

According to Pentin, “this advocacy for ‘sexual and reproductive health-care services’ and for ‘reproductive health’ — terms that in the U.N. setting have been interpreted to include provision of abortion — is not mentioned in the governors’ declaration. Instead, all the pledges are temporal in nature relating to the environment, science and socio-economics.”

The first pledge is to “emphasize the fundamental importance” of the Amazonian Synod and to “defend” the directives outlined in its Oct. 26 final document.

Other pledges include a commitment to a “green economy,” building a “new model of sustainable development” based on valuing “environmental heritage, socioeconomic inclusion and respect for the culture of Amazonian peoples,” and a call for “empowerment” of local Amazonian governments, organizations and initiatives.

The declaration also calls for an expansion of the Paris Agreement on Climate Change, calls for “zero illegal deforestation,” and urges “significant resources” be given to local initiatives.

In a pledge consistent with the Vatican’s push to end human trafficking, the declaration also calls for companies to be pressured to “control their supply chains” to avoid “new forms of slavery.”

Central to the declaration is its claim that the world’s “climate and humanitarian crisis” demands “rapid, integrated and urgent action.”

The declaration ends by proposing that the summit become a “permanent forum for discussion.”

Signatories include the chancellor of the Pontifical Academy of Sciences, Bishop Marcelo Sánchez Sorondo, governors from the regions of Brazil and Peru, and representatives of the two advocacy groups co-sponsoring the meeting.

According to a Vatican statement, a secondary intention of the meeting was to “open a debate with the international community” in order to find “innovative solutions” and “financing mechanisms” to “meet the demands for achieving the SDG by 2030.”

Pentin further reported that “during the Oct. 28 meeting, the governors expressed a wish to partner with the Church and any organization that sought to preserve the Amazon, but reportedly voiced their opposition to Brazilian President Jair Bolsonaro’s position on the environment and the Amazon, in particular his support for mining and extensive agriculture in the region.”

“A ministerial representative of the Bolsonaro government who was present at the meeting reportedly voiced opposition to the assertion that the environment is in crisis,” he wrote. “He was a significant addition as the governors are depending on federal funding for environmental projects.”

Fundraising was reportedly a key goal of the post-Synod event. According to Pentin’s sources, “after the Vatican summit, some of the governors went to Berlin also to seek funds.”

“They came to raise money,” a Vatican source told the National Catholic Register, adding that most of the governors were from socialist parties. “One of them, Flavio Dino of the northeastern state of Maranhão, is a member of Brazil’s main communist party, the PCdoB, which holds radical positions diametrically opposed to Church teaching.”

Another participant, Jandira Feghali, was one of six leftist politicians invited to an Amazon Synod parallel event held in Rome, at which several Brazilian bishops were in attendance. Feghali is known for her strong pro-abortion views and opposed a bill condemning infanticide in Amazonian tribes.

Such policy differences were avoided, however. According to Pentin’s sources: “The participants didn’t say anything about theological questions or the issue of abortion, because the left, when they deal with the Church, never mention those issues, preferring instead to talk about the environment — the issue that can bring them and Pope Francis together.”

“The left will try to use members of the Church to advance their political agenda,” Pentin’s source said, adding that they also wanted to “use this opportunity to raise their international profile to finance their projects.”

His Eminence Cardinal Cláudio Hummes, president of the Pan-Amazonian Ecclesial Network (REPAM), and His Eminence Cardinal Pedro R. Barreto, vice president of REPAM, also attended the meeting. Cardinal Hummes, who oversaw the drafting of the Amazon Synod’s final document, and spoke at the Oct. 28 meeting, limited his remarks to focus on environmental issues and the rights of indigenous peoples.

One source close to the Holy See told Pentin: “The Vatican these days seems more concerned with saving the world than saving souls.”

Commenting in his new book on the increasing sway secular powers exercise inside the Vatican, Bishop Athanasius Schneider has said: “In recent times, some activities of the Holy See … have given the impression that they are the daughter houses of the United Nations and are promoting its ideological agenda.”