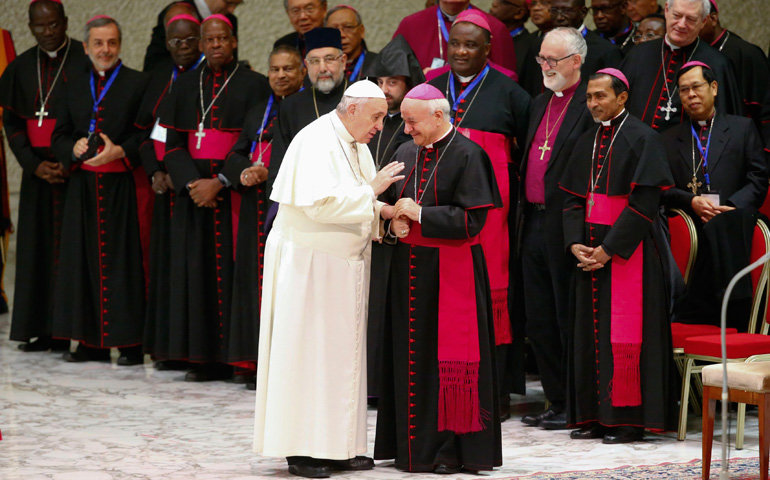 NEW YORK, October 6 (C-Fam) – After a year of turmoil and speculation about its future, the Pontifical Academy for Life is holding its first plenary session at the Vatican.

Pope Francis addressed the plenary of the academy on Thursday. In a powerful and unambiguous speech, he urged it to fight gender ideology, which he called a “utopia.”

Being pro-life requires the academy to “re-think the semantic value of the term 'life,'” said the President of the academy, Monsignor Vincenzo Paglia, during a press conference on Monday.

He said there were no plans to celebrate the 50th anniversary of the papal encyclical Humanae Vitae (on Human Life) next year and that the academy was instead opening “new frontiers for debate,” mentioning specifically the environment, migration and arms control.

The term life “cannot be restricted to specifically bioethical perspectives, if not in an even more limited way,” Paglia explained, referring to the past work of the academy on abortion and bioethics issues like conscientious objection, end of life health care, euthanasia, cloning, embryo research, and reproductive technologies.

“If we must be pro-life we must be always, in every way, and everywhere pro-life,” he added, citing Pope Francis.

Former member of the academy Luke Gormally told the Friday Fax the academy had been in a “bad way” and welcomed the efforts to reform the body. But he questioned “demoting” the focus of the academy on bioethics, pointing to the rapid development of new reproductive technologies and a bevy of normative activity on bioethics issues.

“The original idea of the academy is that there should be interdisciplinary work between philosophy, theology, law, science, and the pro-life front in ways that provided arguments and positions for policymakers,” Gormally explained.

When he last attended the plenary of the academy in 2015 there were plans to commemorate Humanae Vitae in 2018. They must have been scrapped, he said.

The Academy was founded by Pope John Paul II in 1994 in large part for legendary pro-life scientist Dr. Jerome Lejeune in order to bring together scientists from the “various branches of the biomedical sciences” to “study and provide information and training about the principal problems of law and biomedicine pertaining to the promotion and protection of life, especially in the direct relationship they have with Christian morality and the directives of the Church’s Magisterium.”

Gormally said the golden period of the Academy was under the leadership of Cardinal Elio Sgreccia as both President and Chancellor. A flurry of activity at the academy during that period led to cutting-edge discussions and guidance from the academy on topics such as cloning, embryo research, biotechnology, abortion, euthanasia, including a very important collaboration with the Congregation for the Doctrine of the Faith on Dignitas Personae (The Dignity of the Human Person).

“The academy has been listened to a great deal in its history, and I think it can still have an impact,” Cardinal Sgreccia told the Friday Fax, pointing to work of the academy acknowledged widely in public debates, including at the United Nations.

Cardinal Sgreccia, now an honorary consultor, indicated that many of the “new” topics have always been within the academy’s purview, including social justice and environmental ethics.

He pointed to the “Encyclopedia of Bioethics and Legal Science,” which he co-edited, as a compendium of insights and reflections from his many years of work at the academy, with contributions from many of its members.

Sgreccia said he hoped the academy would continue to respond to present events and needs.