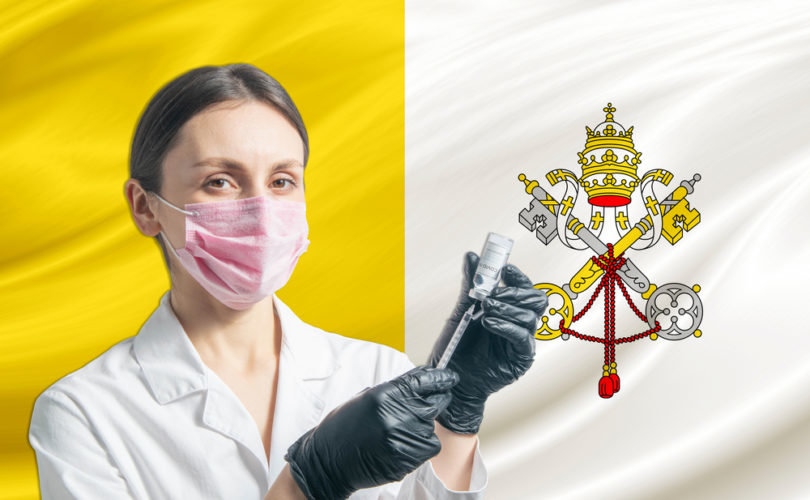 VATICAN CITY, June 21, 2021 (LifeSiteNews) — A Vatican academy will be hosting a conference with two secular medical associations, one of which has lobbied for legal abortion in a pro-life country.

Among the invited speakers are Dr. Soumya Swaminathan, the Chief Scientist of the World Health Organization (WHO); Dr. Andrea Ammon, the Director of the European Centre for Disease Prevention and Control; and Dr. Stefano Semplici, a professor of social ethics at the Tor Vergata public university in Rome.

In a press release about the conference, the Pontifical Academy for Life described the experimental inoculations for COVID-19 as if they were ordinary, approved, and established vaccines.

“One of the greatest achievements of modern medicine, vaccines have been proven to save millions of lives and protect millions more from getting sick each year. And never in our lifetimes has the development of safe, effective vaccines taken center stage in the global arena as prominently as it has during the devastating COVID-19 pandemic,” it stated.

“The current pandemic has amplified some of the challenges already associated with vaccination – from the hurdles that impede equitable global distribution of vaccine doses to unfounded vaccine skepticism and mistrust.”

The Pontifical Academy for Life (PAV) stated that it had teamed up with the WMA and the GMA to “address these issues and send a clear message to the world about the necessity and life-saving potential of vaccines.” It promised that “a small group of leading experts in the field of immunization” would take part.

There is no indication that there will be debate or even dialogue about the use of human fetuses in vaccine research or the use of fetal cell lines in the development and testing of new vaccines. But the subject may not be of much concern to the World Medical Association, which in 2009 and again in 2019 urged the pro-life Nicaraguan government to legalize abortion.

In its “Resolution on Legislation against Abortion in Nicaragua,” the WMA urged the Nicaraguan government to “repeal its penal code criminalizing abortion and develop in its place a legislation that promotes and protects women’s human rights, dignity and health, including adequate access to reproductive healthcare, and that allows physicians to perform their duties in line with medical ethics and particularly medical confidentiality.”

Dr. Soumya Swaminathan, who joined the WHO as its Deputy Director in 2017, is also unlikely to raise the issue of fetal experimentation and exploitation in the making of vaccines. Last October Swaminathan said that there was a “need” for improved access to “safe” abortions in her native India.

The Chief Scientist of the WHO’s “health division” created in 2019 is, however, likely to echo the PAV’s assertion that there is “unfounded” skepticism and mistrust of COVID-19 vaccines, at the very least. In an October 2020 article, Swaminathan described online concerns about the new treatments as an “infodemic” and the WHO’s collusion with Big Tech to suppress them.

“False or misleading information leads to harmful behaviours, and mistrust in governments and the public health response,” Swaminathan wrote in the Indian newspaper The Hindu. “In the last eight months we [at the WHO] have done an incredible amount of work with many tech companies.”

“But infodemic management is not straightforward,” she continued, adding, “it is linked to people’s beliefs and behaviour. Therefore, we’ve set up a behavioural insights group to provide advice on behaviour change.”

Not all vaccine experts, let alone all doctors, are convinced that COVID-19 vaccines are “safe” and “effective.” Last week, a Canadian MP hosted a Parliament Hill press conference featuring a researcher and two doctors who spoke up against the harsh censorship of debate around COVID-19 vaccines and the effective treatment of the virus with vitamin D and Ivermectin. Dr. Byram W. Bridle, a viro-immunologist from the University of Guelph, is very concerned that the inadequately tested vaccines are going to be used on children.

— Article continues below Petition —
PETITION: No to mandatory vaccination for the coronavirus
Show Petition Text
1073250 have signed the petition.
Let's get to 1100000!
Thank you for signing this petition!
Add your signature:
Show Petition Text

The Pontifical Academy for Life was not always so cavalier about the use of fetal cell-lines in vaccines. In 2005, it condemned the practice and said the following in a paper entitled “Moral Reflections on Vaccines Prepared from Cells Derived from Aborted Human Foetuses”:

… [D]octors and fathers of families have a duty to take recourse to alternative vaccines (if they exist), putting pressure on the political authorities and health systems so that other vaccines without moral problems become available. They should take recourse, if necessary, to the use of conscientious objection with regard to the use of vaccines produced by means of cell lines of aborted human foetal origin. Equally, they should oppose by all means (in writing, through the various associations, mass media, etc.) the vaccines which do not yet have morally acceptable alternatives, creating pressure so that alternative vaccines are prepared, which are not connected with the abortion of a human foetus, and requesting rigorous legal control of the pharmaceutical industry producers.

The Pontifical Academy for Life, formerly a bastion of Catholic orthodoxy and a firm defender of human life from conception until natural death, was thoroughly overhauled by Pope Francis between 2016 and 2017. In 2016, the pontiff nominated Archbishop Vicenzo Paglia the new head of the academy founded by St. John Paul II. Shortly afterwards, members were no longer required to sign a declaration that they uphold the Church’s pro-life doctrines and the PAV’s remit included environmental concerns. By the end of the year, Pope Francis had dismissed every member, and in 2017 he appointed new members, including one not opposed to abortion.

LifeSiteNews reached out to the PAV with questions regarding the use of human fetuses in vaccine development and was directed to a 2017 PAV statement on vaccines in general, a 2020 PAV statement on the “moral responsibility” of taking COVID-19 vaccines, and the December 2020 statement by the Congregation for the Doctrine of the Faith outlining why and when it believes taking the COVID-19 vaccines is moral. While speaking cavalierly about the deaths of the two fetuses whose cells were harvested and used in vaccine development, the PAV suggested that the earlier document on the topic “could soon be revised and updated.”