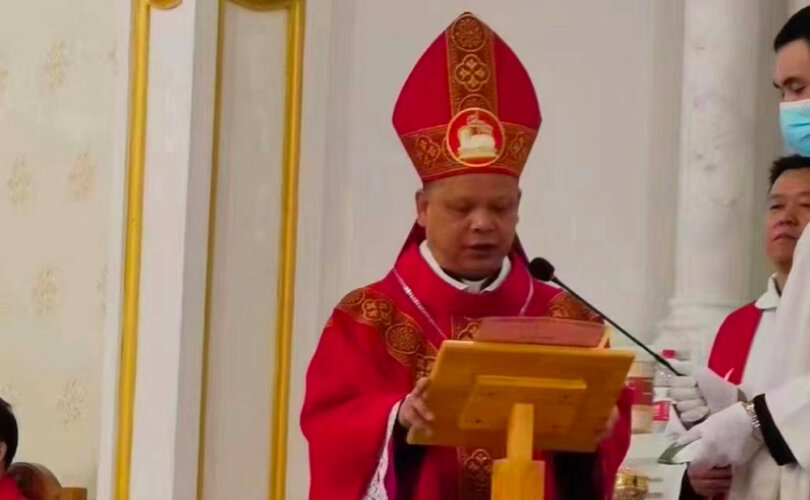 VATICAN CITY (LifeSiteNews) — The Vatican has written of its “surprise and regret” after Chinese Communist Party authorities violated the “spirit of dialogue” of the secretive Sino-Vatican deal by installing a bishop in a diocese not recognized by the Vatican.

In amongst a number of announcements issued by the Holy See Press Office on November 26th was a statement regarding the recent installation of Bishop John Peng Weizhao as auxiliary Bishop of Jiangxi on November 24.

The Holy See noted with surprise and regret the news of the “installation ceremony,” which took place on c.m. 24 in Nanchang, of H.E. Msgr. John Peng Weizhao, Bishop of Yujiang (Jiangxi Province), as “Auxiliary Bishop of Jiangxi,” a diocese not recognized by the Holy See.

Continuing, the Vatican wrote that the ceremony “did not take place in accordance with the spirit of dialogue that exists between the Vatican and Chinese sides and what was stipulated in the Provisional Agreement on the Appointment of Bishops, Sept. 22, 2018.”

As reported by AsiaNews, Peng was appointed auxiliary by Bishop John Baptist Li Suguang, the vice-president of the Chinese Catholic Bishops’ Conference which is not recognized by the Holy See. The ceremony took place in Nanchang, witnessed by   approximately 200 people.

The website of the Communist state-approved Catholic Bishops’ Conference gave an account of the ceremony, noting that Peng made a number of promises, including:

willing to abide by the commandments of God, do his best to assist the bishop and priest, faithfully preach the gospel, lead the gods and members of the Jiangxi Parish, abide by the national constitution, maintain the unity of the motherland and social harmony, patriotic love, and adhere to the principle of independent and independent churches,

Peng was in fact ordained into the underground Catholic Church as bishop of Yujiang in April 2014 , and given a mandate by Pope Francis to succeed Bishop Thomas Zeng Jingmu, the current head of the local underground Church at the time.

Peng was then arrested within weeks by the authorities, and later released in November 2014.

However, AsiaNews reported that on September 22 of this year, Peng informed his diocesan clergy that he had resigned his position in Yujiang, the post given him by the Pope, and had “accepted the government’s plan to integrate all the dioceses into one, the Diocese of Jiangxi.”

This new diocese is one which owes its existence to the Chinese authorities rather than the Holy See, as China has unilaterally amalgamated neighbouring dioceses into the new Diocese of Jiangxi.

Peng, reported AsiaNews, also participated in the ceremony laying the foundation stone of the bishopric of the new diocese.

“On that occasion he was also presented by official Catholic organisations controlled by the Communist Party of China as a role model for sinicisation, the key word indicated by Xi Jinping for the future of religions in China,” AsiaNews continued.

— Article continues below Petition —
URGENT: Say No to the UK introducing a “right” to abortion
Show Petition Text
10649 have signed the petition.
Let's get to 12500!
Thank you for signing this petition!
Add your signature:
Show Petition Text

The news site suggested that Peng had faced considerable pressure from the authorities which led to this decision. The Vatican also referenced this in its statement, writing:

What is more, the civil recognition of Bishop Peng was reportedly preceded by long and heavy pressure from local authorities.

In closing, the Vatican outlined a desire that such episodes would “not be repeated,” noting that it had not been properly informed about the installation ceremony by the relevant authorities.

The Vatican’s statement, despite revealing to what extent Beijing was the dominant factor in the Sino-Vatican deal, noted that that the Holy See was happy to “continue respectful dialogue concerning all matters of common interest.”

The Holy See hopes that similar episodes will not be repeated, remains awaiting appropriate communications on the matter from the Authorities, and reaffirms its full readiness to continue respectful dialogue concerning all matters of common interest.

Observers were swift to ridicule the Vatican for its choice of language in the statement, with The Spectator’s Damian Thompson writing that “the wicked Vatican deal has just blown up in Francis’s face.”

The wicked Vatican deal has just blown up in Francis’s face. Now let’s see Ivereigh and his parrots talk their way out of this one. https://t.co/lmGT4NnHmx

#CCP China violates the spirit and terms of the provisional Sino-Vatican deal by installing a bishop in a diocese not recognized by the Holy See.
Vatican says it is disappointed.

When will the lesson be learned?

The situation regarding Bishop Peng highlights the bizarre relationship the Vatican is attempting to build with the Communist regime in China. Moreover, the years between Peng’s 2014 consecration and his 2022 installation as bishop of Jiangxi highlight the marked alteration brought about by theVatican’s secretive deal with Communist China.

In 2014 the bishop was consecrated into the underground church with a Papal mandate, the same underground Church which – in the words of Cardinal Joseph Zen – the Vatican is “selling out” by virtue of its secretive 2018 deal. It is that same deal – described by Zen as “an incredible betrayal” – which the Vatican has referenced when protesting Peng’s recent installation.

Help an underground Catholic ministry in China
The CCP is trying to stop all catechetical teaching of children, but Psalm 42 Ministries is continuing its heroic ministry by reaching young Chinese Catholics with online courses and platforms where they can learn the true Faith. Please consider supporting them today.

Thus, Peng has been consecrated bishop of one diocese with the approval of the Pope, while (years later) being made bishop of another diocese which is not recognized by the Holy See.

Zen, the emeritus bishop of Hong Kong, has also accused Pope Francis of “encouraging a schism” through his promotion of the deal. He suggested that the Vatican’s silence over China’s long record of human rights’ abuses and persecution of the Church was perhaps an attempt “to establish diplomatic relations with (China).”