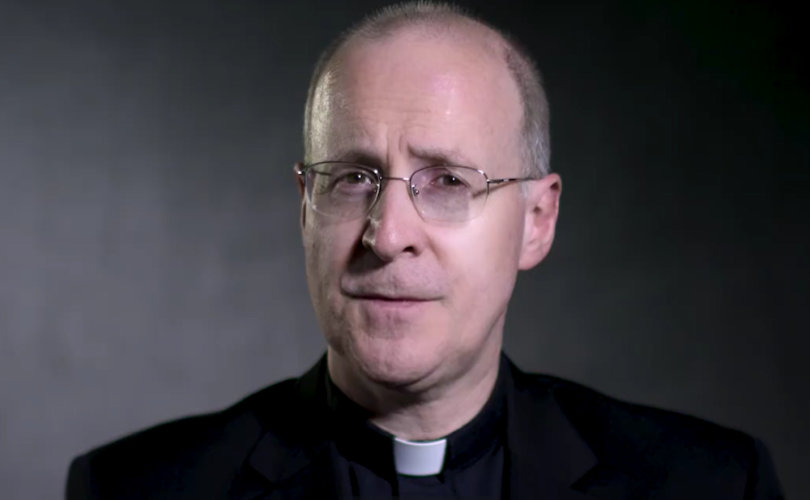 Rev. James Martin, a Catholic priest, author, and adviser to the Vatican on communications, tweeted a seven-point list of pro-homosexual affirmations in response to the Evangelical’s “Nashville Statement” that defended marriage between a man and woman.

Martin’s series of tweets were picked up by The Washington Post and published as a “counter-list” in an August 30 article titled “Seven simple ways to respond to the Nashville Statement on sexuality.”

In his list affirming “LGBT people,” Martin makes no distinction between “sin” and “sinner,” suggesting that same-sex attracted people, no matter what they do with their sexuality, are immune from God’s judgment and the judgments of others.

Some of Martin’s tweets include:

Martin did not clarify if the ‘holiness’ of the LGBT people he knows comes from them living virtuous lives of chastity according to the Catholic Church’s teaching on sexual morality.

Martin’s counter-statement comes one month after the Vatican-reviewed magazine La Civiltà Cattolica published an article accusing Evangelicals and other Christians of forming an “ecumenism of hate” to exert “religious influence in the political sphere.” The article was criticized for its heavy-handed treatment of Christians seeking to be faithful to the Gospel.

The Nashville Statement on biblical sexual morality was released by the Council on Biblical Manhood and Womanhood (CBMW), an evangelical coalition, on August 29.

The statement, composed of 14 affirmations and denials, includes biblical-based teachings on homosexuality and transgenderism. The statement includes:

The Evangelical coalition said a statement of biblical sexual morality was needed because Western culture has “embarked upon a massive revision of what it means to be a human being.”

“By and large the spirit of our age no longer discerns or delights in the beauty of God’s design for human life. Many deny that God created human beings for his glory, and that his good purposes for us include our personal and physical design as male and female,” the group stated.

“We are persuaded that faithfulness in our generation means declaring once again the true story of the world and of our place in it – particularly as male and female,” it added.

“Our true identity, as male and female persons, is given by God. It is not only foolish, but hopeless, to try to make ourselves what God did not create us to be,” the group added.

Earlier this month, Martin dismissed Catholic teaching on homosexuality, telling the pro-homosexual organization PFLAG (Parents, Families, and Friends of Lesbians and Gays) that God made “LGBTQ people … who they are.”

Because of this, the Church holds that there is no such reality as a “homosexual person,” but only a person who struggles with what the Church calls the “disorder” of being attracted to someone of the same sex.

“Although the particular inclination of the homosexual person is not a sin, it is a more or less strong tendency ordered toward an intrinsic moral evil; and thus the inclination itself must be seen as an objective disorder, states a 1986 letter on the topic of homosexuality from the Congregation for the Doctrine of the Faith to the worlds’ bishops.

“[S]pecial concern and pastoral attention should be directed toward those who have this condition, lest they be led to believe that the living out of this orientation in homosexual activity is a morally acceptable option. It is not,” the letter adds.

Evangelical Biblical scholar Robert Gagnon criticized the Vatican this week for giving Martin a position of responsibility in the Catholic Church.

“Martin is someone who has no business being in a position of responsibility in the Catholic Church because his raison d'etre appears to be the destruction of the historic Catholic (and general Christian) position on a male-female foundation for sexual ethics grounded in Scripture (including Jesus' teaching on sexual ethics),” he posted on Facebook.

“Having people like Martin in authority (whether in a Catholic context or a Protestant one) is like hiring as the head of a hospital surgical team an extreme “Christian Science” practitioner who does not believe in surgery; only in the case of Christian faith the malpractice is worse since it has a moral component with eternal ramifications,” he added.