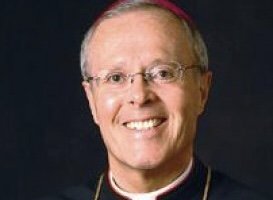 September 11, 2019 (LifeSiteNews) — The Vatican has authorized the investigation of a Minnesota bishop under new norms for addressing clerical sexual misconduct issued by Pope Francis in May.

He is the first sitting bishop in the United States to face investigation under the new standards put forth in Francis’ document Vos estis lux mundi.

“I have been authorized by the Congregation for Bishops to commence an investigation into allegations that the Most Reverend Michael Hoeppner, the Bishop of Crookston, carried out acts or omissions intended to interfere with or avoid civil or canonical investigations of clerical sexual misconduct in the Diocese of Crookston,” Hebda told CNA on Tuesday.

“Law enforcement has been notified of the allegations,” Hebda said. “The allegations were reported to me under the procedures set out in Pope Francis’ recent legislation addressing bishop accountability, the motu proprio Vos estis lux mundi.”

Francis’ document directs allegations of abuse by bishops to be sent to to the Holy See and the metropolitan bishop, the head of the ecclesiastical province.

Vos estis lux mundi was promulgated May 9 and went into effect on June 1. Critics have said it falls short because it leaves bishops accountable only to other bishops. The document allows for lay involvement in investigating bishops, but it does not require it.

Hebda did not say directly what charges against Hoeppner he would investigate, according to the report, though the Crookston bishop has been accused of pressuring a former candidate for the diaconate in the diocese, Ron Vasek, to retract an allegation that a Crookston priest molested him in 1971.

Vasek signed a letter in 2015 withdrawing the allegation and told CNA in 2018 that Hoeppner had pressured him to sign the letter.

The Diocese of Crookston referred inquiries to the Archdiocese of St. Paul and Minneapolis, according to the report.

The diocese announced in July that a $5 million settlement had been reached in 15 sex-abuse lawsuits filed against it, including the stipulation that the diocese release the transcripts of depositions from Hoeppner and other diocesan officials.

Hebda told the news outlet that he has “appointed qualified lay persons to assist me in carrying out this investigation, to provide an independent review of its contents, and assist in its examination and analysis.

“All involved in this investigation have been encouraged to respond to the investigators’ requests and provide accurate information so that the truth in this matter may become clear,” Hebda added.

Hoeppner will remain at the helm of the diocese, at least until Hebda sends the initial findings of his investigation to the Vatican.

“This investigation is a preliminary one and not a full canonical process,” the Twin Cities archbishop said. “As such, a limited time period has been established by the Holy See to gather information that may substantiate (or not) the truthfulness of the allegations.

“The gathered information will be forwarded promptly to the Apostolic Nuncio, who is the Pope’s representative in the United States,” he said, “and to the Congregation for Bishops in Rome for a determination whether a subsequent process is warranted.”

“Those who filed the reports have no obligation to keep silent and the accused is presumed innocent,” said Hebda.

News of the Vatican authorization for Hebda to investigate Hoeppner comes as Buffalo Bishop Joseph Malone faces calls to step down over his handling of clergy sex abuse in his diocese, and also three new allegations of sex abuse against retired Cheyenne Wyoming Bishop Joseph Hart.

The three allegations against Hart were announced Tuesday by the Cheyenne diocese, bringing the total against him to six, Crux reported. Hart could be the first U.S. bishop to face criminal prosecution for sexual abuse.

Catholics continue to call for accountability from Church leadership more than one year after news broke in June 2018 of the sexual abuse scandal surrounding Theodore McCarrick.