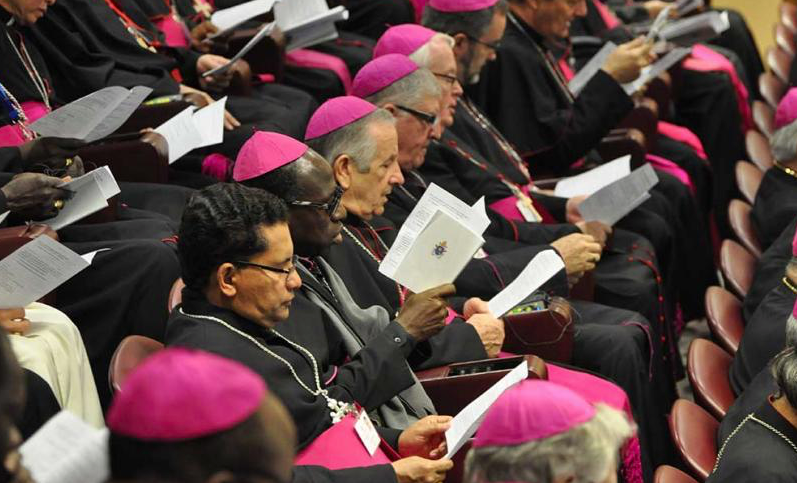 VATICAN CITY, October 10, 2018 (LifeSiteNews) — On Wednesday, the Vatican released the names of those prelates who will be responsible for drafting the final document at the Vatican Youth Synod currently underway in Rome.

The fact that the twelve-member drafting commission is heavily stacked with papally appointed members and synod organizers is raising concerns that the synod may be used as a vehicle to introduce pastoral programs rooted in questionable teaching.

Representing the five continents, the elected members of the synod’s drafting commission include: for Africa, Cardinal Peter Turkson of Ghana, Prefect of the Vatican’s dicastery for integral human development; for America, Cardinal Carlos Aguiar Retes of Mexico City, one of 41 delegates chosen by Pope Francis to attend the synod; for Asia, Cardinal Oswald Gracias, Archbishop of Mumbai, India, and member of Pope Francis C-9 Council of Cardinals; for Europe, Archbishop Bruno Forte of Chieti-Vasto, Italy, and member of the synod’s organizing body; and for Oceana, Bishop Peter Andrew Comensoli, Archbishop of Melbourne, Australia, who is also a papal delegate.

Key members of the Synod Secretariat, including its general secretary, Cardinal Lorenzo Baldisseri, and its general relator Cardinal Sérgio da Rocha of Brasilia, Brazil — who will preside over the commission — are automatically named as members.

Two special secretaries who assist the general relator were also named to the drafting commission: Father Giacomo Costa, S.J. who is one of the main authors of the Instrumentum laboris, and serves as vice-president of the “Carlo Maria Martini Foundation”; and Father Rossano Sala, professor of youth pastoral outreach at the Pontifical Salesian University.

In 2007, Father Mello was appointed to the drafting commission for the final document of the Fifth Latin American Episcopal Conference held in Aparecida, Brazil. Pope Francis, who at the time was the cardinal-archbishop of Buenos Aires and president of the Argentine Bishops’ Conference, was the head of the commission.

Pope Francis’ friendship with Archbishop Shevchuk — who represents the 22 Eastern Churches — dates back at least to 2009, when as a young auxiliary bishop Shevchuk was appointed to an eparchy in Buenos Aires.

Less is known about why the Pope chose Father Redondo. But as the National Catholic Register reported, in a 2004 interview the Cuban priest said Jesus’ plan for mankind is “revolutionary and transformative,” and that to “implement the kingdom, we must begin here and now” by first “banish[ing] the old structures.”

Absent from the list are any bishops from the United States.

The release of the names of the drafting commission has increased concerns that the Youth Synod may be used as a vehicle for introducing a general acceptance of a homosexual lifestyle within the Church.

The first red flag came when the “LGBT” acronym was included in in the synod’s working document (n. 197). The Holy See has never adopted the language of the homosexual lobby in its documents, and last week on the synod floor, Archbishop Charles Chaput of Philadelphia told the synod fathers that such language should not be part of the synod’s final document.

Archbishop Chaput’s intervention came just three days after Cardinal Lorenzo Baldisseri, General Secretary for the Synod of Bishops and member of the drafting commission, refused to remove the term “LGBT youth” from the synod’s working document.

This concern has been further heightened by the fact that a new Apostolic Constitution on the structure of synods, issued two weeks ago, has established that the final document of a synod, if approved by the Pope, would become part of the Ordinary Magisterium of the Church. By implication, this could mean the acronym “LGBT” could become enshrined in the papal magisterium of the Roman Catholic Church.

It is also strengthened by the fact that a faction within the 2014 Extraordinary Synod on the Family was already seeking to introduce a shift in the Church’s teaching on homosexuality through their interim report, releasing the document to the media before the Synod Fathers had seen or reviewed it. Archbishop Burno Forte — who has now been elected to represent Europe on the drafting commission — was publicly “outed” at the 2014 Synod as the prelate who wrote the midterm report’s heterodox section on homosexuality.

The section of the report penned by Archbishop Forte reads:

Homosexuals have gifts and qualities to offer to the Christian community: are we capable of welcoming these people, guaranteeing to them a fraternal space in our communities? Often they wish to encounter a Church that offers them a welcoming home. Are our communities capable of providing that, accepting and valuing their sexual orientation, without compromising Catholic doctrine on the family and matrimony?

The question of homosexuality leads to a serious reflection on how to elaborate realistic paths of affective growth and human and evangelical maturity integrating the sexual dimension: it appears therefore as an important educative challenge. The Church furthermore affirms that unions between people of the same sex cannot be considered on the same footing as matrimony between man and woman. Nor is it acceptable that pressure be brought to bear on pastors or that international bodies make financial aid dependent on the introduction of regulations inspired by gender ideology.

Without denying the moral problems connected to homosexual unions it has to be noted that there are cases in which mutual aid to the point of sacrifice constitutes a precious support in the life of the partners. Furthermore, the Church pays special attention to the children who live with couples of the same sex, emphasizing that the needs and rights of the little ones must always be given priority.

While many observers are looking to the bishops of Asia and Africa for a strong defense of the Church’s teaching on human sexuality, the members of the developing world named to the drafting commission are have also raised concerns.

On the Asian front, in 2013, Cardinal Oswald Gracias was the only Church leader to publicly oppose a ruling by India’s Supreme Court to overturn a decision taken by the Delhi High Court in 2009, which had decriminalized homosexual acts.

Asked about the decision in 2015, Cardinal Gracias said:

For me it’s a question of understanding that it’s an orientation … I know there is still research being done whether it’s a matter of choice or matter of orientation and there are two opinions on this matter. But I believe that maybe people have this orientation that God has given them and for this reason they should not be ostracized from society. The Church is concerned, and if you’re Christian or Catholic and if you’re part of the Church have to have compassion, sympathy and understanding toward them.

As for Africa, Cardinal Turkson seems to have softened his position over the years in comparison to his peers. In 2012, as president of the Pontifical Council for Justice and Peace, Turkson told the National Catholic Register that some of the sanctions imposed on homosexuals in Africa are an “exaggeration,” but argued that the “intensity of the reaction is probably commensurate with tradition.”

Speaking about the stigma surrounding homosexuality in Africa, the cardinal told the Register it is important to understand the reasons behind it. “Just as there’s a sense of a call for rights, there’s also a call to respect culture, of all kinds of people,” he said. “So, if it’s being stigmatized, in fairness, it’s probably right to find out why it is being stigmatized.”

But just three years later, Turkson shifted his position. At the 2015 Synod on the Family, he told New Ways Ministry that, when studying in the United States in the 1970s, “science considered [homosexuality] a sickness and a disease. Over the years that evaluation has changed.”

“Other countries have to grow in the same way and it can take time,” he said.

Expanding on his comments at a Vatican press briefing later that day, Cardinal Turkson added: “Every book presented homosexuality as an abnormality. Now it has changed. The books had to change their content. That shows, you must admit, that countries that do not accept [homosexuality] need further education. A lot of countries have learned but we need to let them grow and improve.”

Turkson’s remarks stand in stark contrast with those of Cardinal Robert Sarah of Guinea, who has been consistent in calling on African [and U.S.] bishops to “react” to efforts by United Nations and other Western bodies to impose a “European mentality” about homosexuality on the nations of Africa.

“This is not our culture; it’s against our faith,” Cardinal Sarah, said in 2012.

In his intervention at the 2015 Synod on the Family, Cardinal Sarah, Prefect of the Congregation for Divine Worship and the Discipline of the Sacraments, called gender theory and the LGBT lobby “demonic” in origin, and said they are one of the major threats to the family.

It is still unclear how much sway the newly elected members of the drafting commission will have over the contents of the synod’s final document. At a press briefing today, Mexican Cardinal Aguiar Retes, who is a member of the commission, said the “biggest challenge is to be faithful to what was discussed, to what was agreed upon in the working groups.”

Created a cardinal by Pope Francis in 2016, Aguiar Retes said a key challenge is “not for it to be a final document but that it should reflect what was discussed by the bishops in a collegial way” and then “given to the hands of the Holy Father,” who could use it for his “post-synodal apostolic exhortation.” It is still unclear, however, whether or not Pope Francis has decided to issue a summary document after the synod.

Whatever the commission comes up with, according to new synod rules the final document will need to receive a two-thirds majority to be approved. Synod organizers have not yet specified, however, if the voting procedures will require the document to be voted on number by number, part by part, or even as a whole. The undersecretary for the Synod, Bishop Fabio Fabene, has only said that final voting procedures will depend on the “form” the document takes.