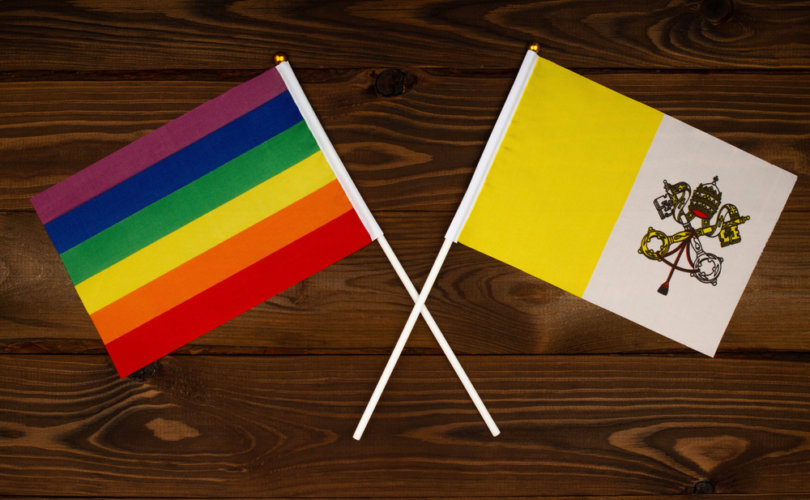 VATICAN CITY (LifeSiteNews) — The Vatican’s Synodal office has reversed its decision and issued an apology to dissident pro-LGBT group New Ways Ministry after deleting a link to a video made by the group, due to previous condemnation of the New Ways Ministry by a number of prominent U.S. bishops.

A link on the resource site for the multi-year Synod on Synodality, contained and directed users to a video produced by prominent pro-LGBT group, New Ways Ministry. The group claims it “educates and advocates for justice and equality for lesbian, gay, bisexual, transgender, and queer (LGBTQ) Catholics, and reconciliation within the larger church and civil communities.”

On December 7, Thierry Bonaventura, the communications manager of the General Secretariat of the Synod of Bishops said he had removed the link to the dissident group’s video, after officials at the Secretariat learned of the group’s condemnation by Cardinal Francis George, who at the time was USCCB president.

Following this, on December 8 New Ways Ministry made the strategic move of releasing correspondence between Pope Francis and the group’s executive director, Francis DeBernardo, dated May 3 and June 17, 2021. Pope Francis praised the group’s “attitude of shepherd closeness” and its “neighborly work.”

The Pope also praised the group’s co-founder Sr. Jeannine Gramick, ignoring her long history of dissenting from Catholic teaching on homosexuality and abortion, saying that she is “a valiant woman who makes her decisions in prayer.”

DeBernardo called the Secretariat’s decision to remove the video from the Synodal website “a big mistake.”

Following outrage from certain media outlets over the video’s removal, as well as from pro-LGBT Jesuit Fr. James Martin, Bonaventura issued an apology “for the pain caused” by his decision, which he said affected “the entire LGBTQ community who once again felt left out.”

“I feel that I must apologize to all LGBTQ people and to the members of New Ways Ministries [sic] for the pain caused, testifying … the firm will — not only mine but of the entire General Secretariat of the Synod — not to exclude those who wish to carry out this synodal process with a sincere heart and a spirit of dialogue and real discernment.”

Bonaventura then invited supporters of the LGBT movement to write directly to the Secretariat, in order to “share” their thoughts and ideas, as Pope Francis has in fact called for in the Synod’s preparatory documents.

The link is now active on the Synodal resource website.

New Ways Ministry’s DeBernardo “warmly” accepted the apology, thanking Bonaventura for “recognizing the harm that such a slight would have caused LGBTQ people and the entire church.”

“Mr. Bonaventura’s kind words and his reposting of the video will be effective in repairing the rift that exists between LGBTQ people and Catholic institutions,” added DeBernardo, before highlighting the import of the renewed links between the Vatican, and the heavily condemned LGBT group.

“This unprecedented apology from a Vatican office corrects the earlier mistake and amplifies, even louder, the welcome that Pope Francis has extended to LGBTQ people. The synod office has now created a special channel for LGBTQ people to share their stories. Every diocese should follow this example and set up their own channels of communication with LGBTQ communities.”

DeBernardo said New Ways Ministry would be providing “educational events and materials to encourage LGBTQ participation in the synod,” stating that “the church will benefit greatly by LGBTQ involvement.”

Fr. James Martin also welcomed the reversal from the Vatican.

Breaking: Synod Office in Rome @Synod_va apologizes for removing a link to @NewWaysMinistry, an LGBTQ Catholic ministry, and invites LGBTQ people and others who feel on the margins, to participate in the Synod. Another small step forward for LGBTQ Catholics. https://t.co/lL3td1VHMu

The support shown by Pope Francis and the Vatican, as exemplified in the two letters and Bonaventura’s apology, places the current pontificate in opposition to previous condemnations made by Pope Benedict XVI while a cardinal, and prominent U.S. bishops. Early in its history, New Ways Ministry was condemned in 1984 by Cardinal James Hickey, who prohibited the group from any activities in the Archdiocese of Washington.

Condemnations were also made in 2010, by Cardinal Francis George, and in 2011, by Cardinal Donald Wuerl. However, the most severe condemnation of the group came in a 1999 note from the Congregation for the Doctrine of the Faith (CDF), signed by Cardinal Ratzinger.

That note condemned the actions of the group, and its two founders, as “doctrinally unacceptable because they do not faithfully convey the clear and constant teaching of the Catholic Church in this area.”

“The ambiguities and errors of the approach of Father Nugent and Sister Gramick have caused confusion among the Catholic people and have harmed the community of the Church,” stated the CDF. “For these reasons, Sister Jeannine Gramick, SSND, and Father Robert Nugent, SDS, are permanently prohibited from any pastoral work involving homosexual persons and are ineligible, for an undetermined period, for any office in their respective religious institutes.”

Catholic parish celebrates homosexuality, sells Gay Pride t-shirts after Mass – At a New Ways Ministry conference in November 2016, Fr. Muth proposed developing a Pre-Cana course designed specifically for gays and lesbians. He went on to say that he already meets with gay couples getting married and has directed them to “older gay couples in the parish” that can offer “the benefit of their experience.”

US bishop cancels parish talk by gay-activist nun – We are not going to have someone who opposes Catholic teaching to be teaching in a Catholic diocese,’ says Bishop Peter Jugis’ spokesman.