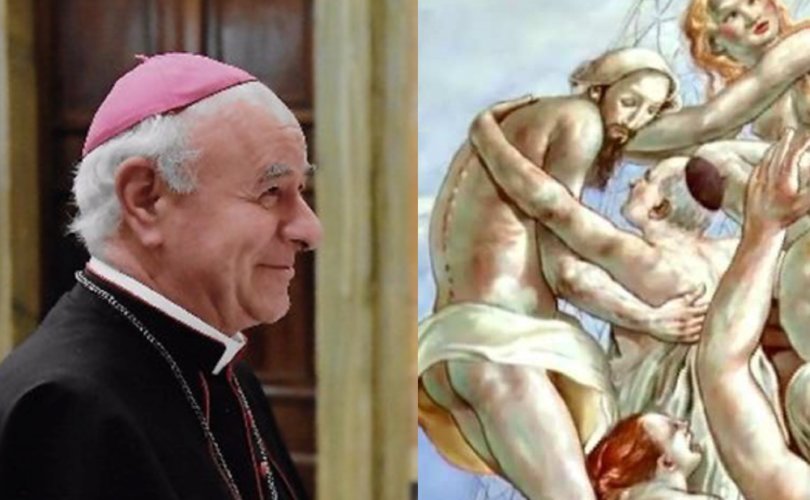 ROME, June 7, 2017 (LifeSiteNews) — A leading Vatican prelate is defending a homoerotic mural he commissioned in his former Italian cathedral in which he is portrayed as clasping a semi-naked man. While Catholic critics have called the work “blasphemous,” “disgusting,” and even “demonic,” Archbishop Vincenzo Paglia says the mural was meant to be an “evangelizing” tool.

“One great theme of my preaching in such circumstances was reliance on God’s mercy to deliver us from eternal punishment, and in that context I was presented with a project for a mural that would show the risen Christ gathering into nets all of wounded and suffering humanity and, as their Redeemer, bringing them with him as he ascended to Heaven and the Father,” the Archbishop said in a June 6 interview with National Catholic Register’s Ed Pentin.

“In the mural, humanity is shown naked to express its radical poverty, and I too am included in the mural as one who needs redemption no less than anyone else. It has been in the Cathedral for more than 10 years with no objection from the local Catholic community, and I believe it is seen by the community as a part, perhaps to some a too fleshy part, of an overall evangelizing commitment,” he added.

Paglia was appointed last August by Pope Francis as president of the Pontifical Pope John Paul II Institute for Studies on Marriage and Family. He also heads the Pontifical Academy for Life. As the former head of the Pontifical Council for the Family, Paglia oversaw the development and launch of a Vatican-approved sex-ed course for teens that contained explicit images.

“Unlike the past masters of religious art who have painted the nude — one thinks of Massacio's 'Expulsion from Paradise' or Michelangelo's 'The Creation of Adam' — in Cinalli's work the human body and sexuality are paramount, and redemption is merely the excuse or the costume in which it dresses for the performance of the artist's real intention: Everyone is loved by God and therefore all sexual activity, regardless of how depraved, is blessed by God,” he said.

“This false message is in direct contradiction to the urgent imperatives of Sacred Scripture. It also violates the norms outlined by St. John Paul II in his Theology of the Body, in which he devotes a significant section to nudity in art. The dignity of the human person, he emphasizes, must always be respected by both artist and viewer, and any depiction of the naked human body should lead to the contemplation of the whole truth about man — his eternal value. The problem of pornography in the modern age, John Paul II writes, must be assessed according to Christ's words in the Sermon on the Mount, about purity of heart and about its opposite, adultery of the heart,” he added.

Maureen Mullarkey, a member of the International Association of Art Critics and senior contributor to The Federalist, also criticized the work, writing on her blog in March that Paglia’s mural was a “true scandal” for the Church.

“Paglia’s narcissism—the urge to flaunt his liberation from the moral considerations he is pledged to honor—is stunning. It is a finger in the eye of congregants who trust in a priest’s fidelity to his vows. To place it in a public house of worship is treachery. It is also a declaration of Paglia’s own trust in his immunity from reprimand,” she wrote.

“The true scandal here is the basis—which goes unmentioned—of Paglia’s confidence that he could broadcast his sexuality on a cathedral wall without fear of censure,” she added.

Paglia told Pentin in the interview that he did not think it “productive” for him to answer the charge that the mural is demonic.

“While I want to make my answer to this question useful, and am sensitive to the concerns raised in it, I don’t think that specifically addressing the hyperbolic, and inaccurate, adjectives ‘blasphemous’ and ‘demonic’ is productive,” he said.

Vatican archbishop’s homoerotic mural is a ‘true scandal’ that reaches the pope: US art critic