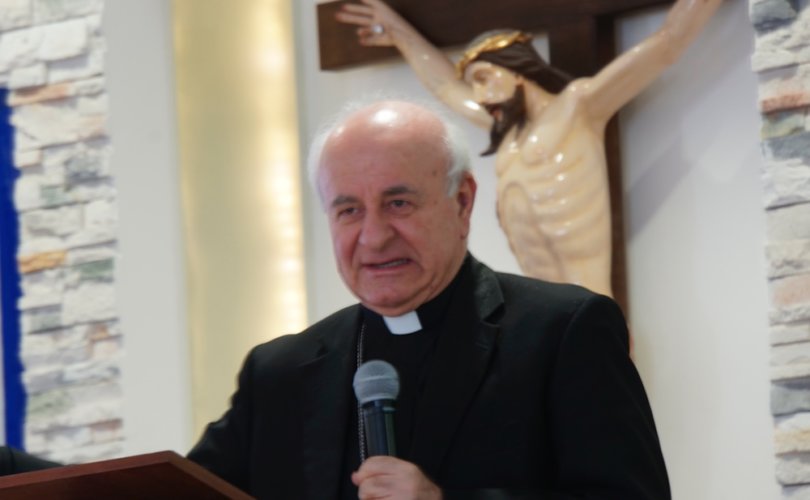 April 6, 2018 (LifeSiteNews.com) – The current president of the Vatican’s Pontifical Academy for Life is warning that it is “dangerous” to speak of the family as a “little church” and the “domestic church,” a term that is used in the Catechism of the Catholic Church and in the documents of Vatican II.

“The Church, which is a familial Church, for me, it isn’t very clear, it’s dangerous, for example, to define the individual family as a little church,” Archbishop Vincenzo Paglia said to a group of clergy and laity gathered at the major seminary of the Mexican diocese of Queretaro on March 24.

“It’s very dangerous, because it can encourage an egoism of the family,” continued Paglia. “I’m complete. I’m a little church. No?”

Paglia called the tendency to the “egoism of the family” a form of “familyism” and claimed that Jesus spoke against “familyism.”

“When his mother and his brother came to Jesus, what did he say to them?” asked Paglia. “Who is my mother, who are my brothers? Those who listen to the word of God. Those who participate in the Mass on Sunday.”

According to Paglia, there is only a “domestic church” through unity with other families within the Church.

“You are a domestic church by uniting yourself to other families,” said Paglia, who added that the family shouldn’t have “one center,” and “for this purpose, it’s better to have two centers: the parish and the family.”

“This is of decisive importance for me,” said Paglia. “For example, what do you do with a believer who is alone? Is he excluded? No, he’s not excluded,” because he has the “family of Sunday.”

“Those who aren’t married? My family isn’t that of my mother and father . . . the true family is the family of the Church. Those among the elderly who are alone, they cannot remain alone in our houses. On Sunday they have to come to the Church, to the Mass of the community,” he continued.

Archbishop’s words at variance with Catechism, other Catholic documents

The archbishop’s words seem to reject the Catholic Church’s traditional doctrine, which is based on Sacred Scripture, which likens the family to the Church and calls the family the “domestic church.”

The Catechism of the Catholic Church states in paragraph 2204, “The Christian family constitutes a specific revelation and realization of ecclesial communion, and for this reason it can and should be called a domestic church.” The statement is a direct quote of Pope John Paul II’s apostolic exhortation Familiaris consortio.

The Christian family “is a community of faith, hope, and charity; it assumes singular importance in the Church, as is evident in the New Testament,” the Catechism continues, citing several passages of Scripture, including verses from the Letter to the Ephesians, chapter five.

The Catechism also cites the Second Vatican Council, whose Constitution on the Church, Lumen gentium, paragraph 11, states: “The family is, so to speak, the domestic church. In it parents should, by their word and example, be the first preachers of the faith to their children; they should encourage them in the vocation which is proper to each of them, fostering with special care vocation to a sacred state.”

Paglia seems to be rejecting the words even of Amoris laetitia itself, which repeatedly refers to the family as the “domestic church,” and which Paglia claimed to defend at the conference.

Paglia’s denunciation of “familyism” was also made in his preceding talk, Amoris laetitia: for the pastoral care of marriage and of the family, in which he warned of “a sentimental and despotic familyism, which annuls all other ties.”

“The faith is inspired by the wisdom of the creation of God, which has not confided to the union of man and woman the care of an intimacy that terminates in itself, but the impassioned goal of making the world domestic and familial,” said Paglia.

“The pope, in the third chapter of the apostolic exhortation [Amoris laetitia], asks himself if up to now we haven’t made a mistake in presenting ‘a theological idea of matrimony that is too abstract, almost artificially constructed, far from the concrete situation and of the effective possibilities of real families,’” added Paglia.

The archbishop made only two tangential references to marriage as a “sacrament” during his talk, and mostly spoke of marriage as a way of reproduction. He also warned that parents shouldn’t be “obsessed” with directing their children, quoting Amoris laetitia’s words to the same effect.

Paglia’s controversial leadership of the Pontifical Academy for Life

Since his appointment by Pope Francis to the presidency of the Pontifical Academy for Life, Paglia has caused much controversy by overseeing the dismissal of many of the strongest voices for life and family from academy membership, as well as the appointment by Pope Francis of a large number of Academy members who dissent from Catholic doctrine on the inviolability of the right to life and on sexual morality.  The purges have led to the creation of a parallel John Paul II Academy for Human Life and the Family (JAHLF), led by former members of the Vatican’s academy.

In his previous position as President of the Pontifical Council for the Family, Paglia oversaw the creation of a sex-ed program whose materials were so sexually explicit and even obscene that one psychologist associated with the Holy See’s Congregation for the Clergy said that Paglia should be evaluated by a sex abuse review board, and that “the pornographic images in this program are similar to those used by adult sexual predators of adolescents.”

Congregation for the Doctrine of the Faith
Piazza del S. Uffizio, 11, 00193 Roma, Italy

Vatican archbishop: I ‘don’t…need to defend’ Christian values, ‘they defend themselves’