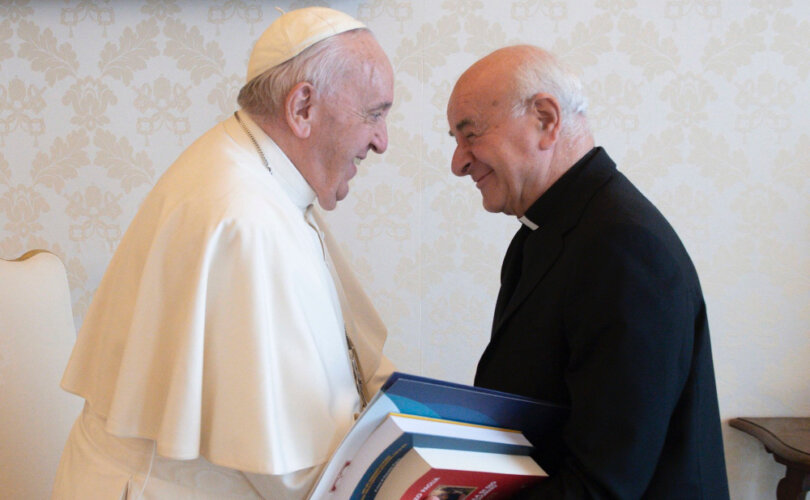 VATICAN CITY (LifeSiteNews) — The president of the Pontifical Academy for Life (PAV), Archbishop Vicenzo Paglia, has declared that he “believe[s] the day will come” when either Francis or his successor will issue an “encyclical” attacking the Church’s ban on contraception.

Paglia made the comments in a lengthy interview with The Tablet’s Christopher Lamb, the tone of which was set by the brief summary given to the article: “Polling worldwide shows that most Catholics do not accept that the use of contraceptives is morally wrong.”

Earlier this year, speculation intensified that Pope Francis might issue an encyclical attacking the Catholic Church’s ban on contraception. In early July, La Civilta Cattolica – notable for having its content reviewed by the Vatican’s Secretariat of State before publishing – summarized and promoted the Pontifical Academy for Life’s (PAV) new book which proposes both contraception and artificial insemination as morally acceptable.

The article, summarising the PAV’s heterodox book, closed with the groundbreaking passage: “It is legitimate to ask if Pope Francis will give us a new encyclical or apostolic exhortation on bioethics that might be called ‘Gaudium Vitae’.”

Jesuit-run America magazine subsequently theorized that such a document would “spark a wide-ranging reflection on the ethics of human life that could lead to a new and definitive papal teaching document on issues as polarizing as contraception, assisted procreation and palliative care.”

In light of this, along with the PAV’s increasingly confusing or clearly pro-abortion public messages and actions, Lamb asked Paglia about the possibility of a new encyclical which would promote contraception in some way.

“Obviously, this question would need to be put to the Holy Father, more than to me,” replied Paglia. “I believe that the day will come when Pope Francis or the next Pope [will do so]. But what can I say? Certainly, we have to address it.”

Going further, Paglia decried what he described as a focus on opposition to contraception, saying that – with regard to Humanae Vitae’s contents – “we have stopped only at, perhaps, one small aspect, that of contraception. There is the issue of responsible parenthood that Paul VI emphasizes.”

The 77-year-old prelate argued that now “whole architecture of the ethical dimension of life” must be developed.

“Growth is not the contradiction of the prior,” said Paglia. “Growth is an overcoming in breadth and depth.” However, Francis’ statement on the death penalty being “inadmissible” comes in complete contradiction to the writings, teaching, and statements of theologians, saints, and the Magisterium throughout the history of the Church, and even Sacred Scripture.

Giving such an example to justify his call to reform the “architecture of the ethical dimension of life” highlights to what extent Paglia envisages a future encyclical on contraception would adhere to Tradition.

Paglia also defended the Pope’s recent decision to appoint to the PAV the pro-abortion globalist, economist Mariana Mazzucato. “When we talk about ‘life’ in a broad sense, we realized that it is not possible … to think about life without what it means in all its significance,” he said.

“There are thousands and thousands per day, for example, [dying] from hunger – can I not talk about economics?” he said. Paglia has previously described Mazzucato as “pro-choice” rather than pro-abortion, and doubled down on his defense of the economist as a “useful …part of this alliance.”

Referencing Paglia’s role as head of the PAV, Lamb peculiarly described it as being with regard to the “Church’s approach to the defense of human flourishing,” rather than the defense of life.

“Today what is always important to us is to be really pro-life in a manner that is effective and in no way ideological,” Paglia stated. The archbishop added that “we’re interested in demolishing – how to say – the ideological prejudices that contaminate reflection, contaminate public opinion. And they prevent broad engagement across the board.”

Paglia also argued that discussions “about abortion or euthanasia have become ideologized,” without expanding on what he meant by such a statement.

However, he gave a hint on his thoughts when he attacked Catholics who Lamb described as being opposed to “even having a theological dialogue about certain moral questions.”

“I say to those who oppose discussing these issues: I think there is a deep problem of faithfulness to the Spirit,” argued Paglia. “And that is to say, that it is a pathology, it is a sick faith. And faith in the formula and not in the Spirit. I would say it runs the risk of blocking the Spirit.”

Once more alluding back to a possible encyclical against the Church’s ban on contraception, Paglia presented a new meaning to Scripture in order to justify potential, doctrinal revolution:

We see this in what Jesus said to the Apostles before he left them. He said, ‘I have other things to say to you, but you would not understand them. Then the Spirit will come.’ This is also the progress of the Church.

This sentiment has already been presented by the PAV in recent months. In defending the book against criticism from concerned Catholics online, the PAV wrote that theology requires “progress” as part of a natural process. “Be careful: what is dissent today, can change,” wrote the PAV on Twitter.

Be careful: what is dissent today, can change. It is not relativism, it is the dynamics of the understanding of phenomena and science: the Sun does not rotate around the Earth.Otherwise there would be no progress and everything would stand still. Even in theology. Think about it. https://t.co/qO4IxFtTJp

However, as LifeSite has already noted, despite the increasing rumors that Francis will write to justify contraception in some manner, the Church’s ban on contraception cannot be changed.

The evil of contraception, and the universal prohibition against its practice, is a matter of the natural moral law and has been clearly and constantly taught by the Church’s Magisterium over the course of the last century.

For these reasons, the Church’s teaching on contraception cannot change, but rather, as John Paul II declared in 1988, “belongs to the permanent patrimony of the Church’s moral doctrine.”

This prohibition on contraception has been a consistent message presented by the popes, with ever increasing frequency in recent decades, as attacks against the sanctity of life have multiplied.

In 1930, Pius XI taught very clearly in his encyclical Casti Connubii, that to “deliberately frustrate” the sexual act from its natural end, which is the generation of children, was to “sin against nature and commit a deed which is shameful and intrinsically vicious.”

“Any use whatsoever of matrimony exercised in such a way that the act is deliberately frustrated in its natural power to generate life is an offense against the law of God and of nature, and those who indulge in such are branded with the guilt of a grave sin,” continued the Pope.

Another such teaching of note, was John Paul II’s 1981 Apostolic Exhortation Familiaris Consortio, in which he developed the teaching on contraception in relation to the total gift of self that spouses make to each other, calling contraception a contradiction that falsifies a spouse’s giving of self to the other.

When couples, by means of recourse to contraception, separate these two meanings that God the Creator has inscribed in the being of man and woman and in the dynamism of their sexual communion, they act as ‘arbiters’ of the Divine plan and they ‘manipulate’ and degrade human sexuality – and with it themselves and their married partner – by altering its value of ‘total’ self-giving. Thus the innate language that expresses the total reciprocal self-giving of husband and wife is overlaid, through contraception, by an objectively contradictory language, namely, that of not giving oneself totally to the other. This leads not only to a positive refusal to be open to life but also to a falsification of the inner truth of conjugal love, which is called upon to give itself in personal totality (n.32).

While The Tablet closed its report by stating that “a whole new chapter on the ethics of life could be emerging,” the matter, in the Catholic Church, is not up for debate or alteration.