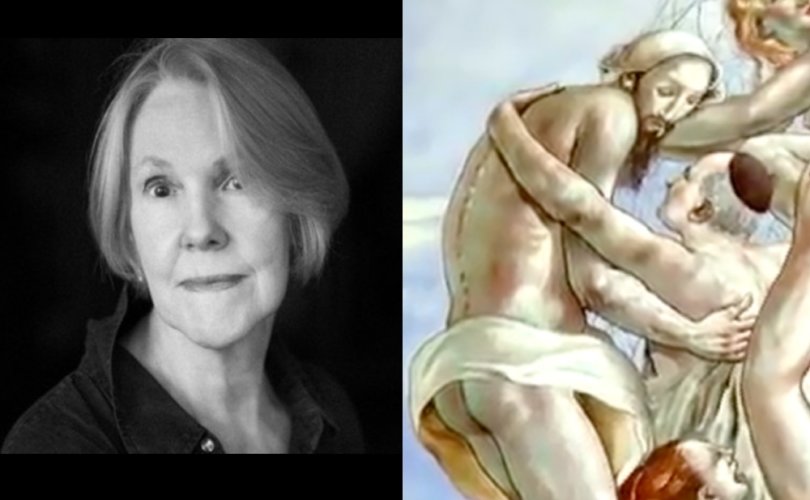 March 22, 2017 (LifeSiteNews) — A U.S. painter and respected art critic said she was not only “shocked,” but “astounded,” by LifeSiteNews’ report earlier this month about a prominent Vatican archbishop who commissioned a homoerotic painting in which he was featured clasped to a semi-naked man.

Maureen Mullarkey, a member of the International Association of Art Critics and senior contributor to The Federalist, wrote on her blog that she at first dismissed the “crux of the story” after being alerted to it by friends.

“A too-quick glance at the mural left me thinking that the most shocking thing here was the lumpen figuration and the then-bishop’s abysmal lack of aesthetic discrimination,” she wrote, adding: “Diverted by art history and the aesthetics of the thing, I missed the crux of the story.”

But after reading the entire LifeSiteNews report and examining the mural in detail for herself, Mullarkey said she now “regret[s] not having paid closer attention before shrugging in dismissal.”

Cinalli told the Italian newspaper La Repubblica in March 2016 that the archbishop oversaw every detail of the work. “There was no detail that was done freely, at random,” he said. “Everything was analyzed. Everything was discussed. They never allowed me to work on my own.”

In the right-hand net, young naked children can be seen entangled with the bodies of older men and women. In another instance, one male can be seen with his hand between another male’s legs groping his reproductive organ. The image of the Savior is painted with the face of a local male hairdresser, and his private parts can be seen through his translucent garb.

Included in one of the nets is Paglia, the then-diocesan bishop. He is depicted wearing his skull cap and clutching another semi-nude man who is tenderly embracing him.

Commented Mullarkey: “Paglia’s narcissism—the urge to flaunt his liberation from the moral considerations he is pledged to honor—is stunning. It is a finger in the eye of congregants who trust in a priest’s fidelity to his vows. To place it in a public house of worship is treachery. It is also a declaration of Paglia’s own trust in his immunity from reprimand.”

Mullarkey’s criticisms are all the more poignant given that she once dabbled in homosexual themes in her earlier career. LifeSiteNews reached out to Mullarkey for comment, but did not receive a response by press time.

Mullarkey said that Paglia and his mural reveal a much deeper problem happening within the Church under Francis’ watch.

“Ultimately, the core of the issue here is not about a mural at all. Not substantially. Nor is it even about Archbishop Paglia. It is about a degraded Vatican culture which props up a man like Paglia, awarding him authority when he should be handed sackcloth and ashes and packed off to a hermitage.”

Commented Mullarkey: “The true scandal here is the basis—which goes unmentioned—of Paglia’s confidence that he could broadcast his sexuality on a cathedral wall without fear of censure. On what protections did his certainty rely? Who are the enablers of this cocksure display of male bonding? From how high up the ecclesial ladder does Paglia’s insurance come? And why is the damned thing still there?”

Founding members of the Vatican’s Pontifical Academy for Life raised concern last week about Paglia’s capacity to lead the Academy on account of the homoerotic depictions he commissioned in his cathedral.

“This work is absolutely disgusting,” Christine Vollmer, president of the Latin American Alliance for the Family as well as a founding member of the Vatican's Pontifical Academy for Life, told LifeSiteNews at that time. She said it was “obvious” that the only way Paglia could commission such a work while being promoted to influential Vatican posts was by having “high-ranking protection at the Vatican.”

Mercedes Arzú Wilson, president of Family of the Americas and also a founding member of the Pontifical Academy for Life, said it was  “incomprehensible” that Pope Francis would appoint Paglia to such influential posts.

Mullarkey said that a “scandal” of this caliber goes all the way to the top.

“What business does this indiscreet, sex-happy man—put plainly, a creep—have to do with marriage and the family? What do his continued appointments, coming as they have in the wake of his billboard-sized disclosure, say about his boss?” she wrote.

The Archbishop’s Mural & The Homintern