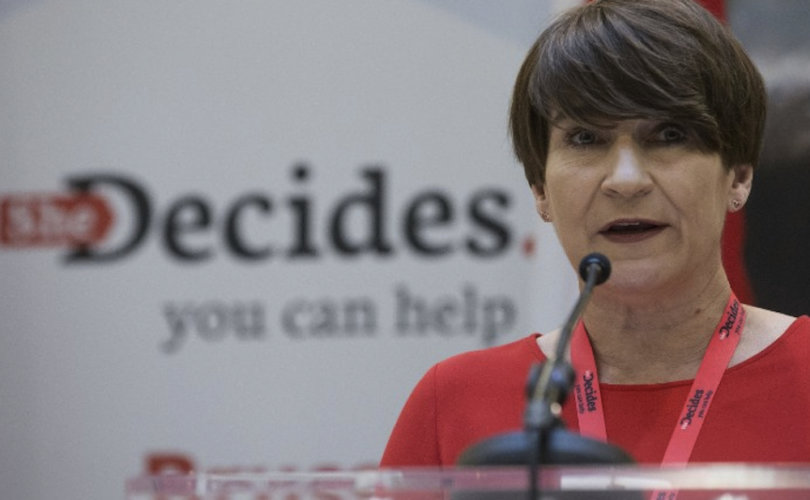 VATICAN CITY, January 16, 2018 (LifeSiteNews) – Concern and controversy were stirred up when leading abortion activist Liliane Ploumen displayed on Dutch television a pontifical honor bestowed on her during a visit to the Vatican in 2017.

Ploumen boasted that she had received a “high distinction from the Vatican, from the Pope,” in a video broadcast. Reception into the Order of St. Gregory is known to be given for “meritorious service to the Church,” so Ploumen has legitimate boasting rights.

According to a joint report filed by OnePeterFive and The Lepanto Institute, which broke the story, “The SheDecides initiative came in response to the funding gap for “family planning” facilities around the world created after U.S. President Donald Trump reinstated the Mexico City Policy, which blocks American federal funding for NGOs providing abortion services. Within six months, SheDecides — which has the support of 60 countries — had received pledges totaling $300 million (USD).

All this occurred within the months immediately preceding Ploumen’s reception of the Vatican Award in June 2017, but somehow, presumably, escaped Vatican vetting.

Former editor-in-chief of Katholiek Nieuwsblad, Henk Rijkers, said in a tweet that the “decoration by the Pope of former abortion minister Lilian Ploumen” is a scandal, and that the Dutch mainstream media’s disinterest in the topic “shows how the killing of unborn babies is banalized here as a standard governmental policy & how the media collaborate in that.”

Also on Monday, Holland’s Cardinal Wim Eijk, a member of the Pontifical Academy for Life, distanced himself from the controversy, saying he had no part in the Vatican’s action.

Steve Skojec of OnePeterFive said he reached out to Greg Burke, director of the Holy See Press Office, several days ago for clarification but received no response.

Instead, perhaps galled by the OnePeterFive and The Lepanto Institute report last week, the Vatican felt pressured to make an announcement to calm the choppy waters Ploumen’s award had stirred up and finally issued a statement.

Vatican officials are dismissing this as a matter of standard protocol, saying Ploumen received “the ancient papal honor as ‘diplomatic practice’ for a visiting official head of state delegation to the Vatican,” according to a report by the National Catholic Register’s Ed Pentin.

“The honor of the Pontifical Order of St. Gregory the Great received by Mrs. Lilianne Ploumen, former Minister of Development, in June 2017 during the visit of the Dutch Royals to the Holy Father, responds to the diplomatic practice of the exchange of honors between delegations on the occasion of official visits by Heads of State or Government in the Vatican.

Therefore, it is not in the slightest a placet (an expression of assent) to the politics in favor of abortion and of birth control that Mrs Ploumen promotes.”

OnePeterFive’s Steve Skojec points out that the Vatican’s press release about the matter raises more questions –– and suspicions –– than it answers. He asks:

“In 2010, she urged homosexuals to disrupt Mass in a Dutch cathedral after an openly homosexual man was denied Holy Communion” the NCR report by Pentin continues.  “Last September, Ploumen was a prominent speaker at the LGBT’s Core Group at the United Nations. The Vatican statement made no explicit mention of her political activism in that area.”

“It’s difficult to be dismissive of Ploumen’s award as a simple oversight,” last week’s  OnePeterFive / The Lepanto Institute report pointed out, “which lends some Vatican watchers to wonder if perhaps (Ploumen’s) bold claims about the award being confirmation of her work might have some truth to them.”