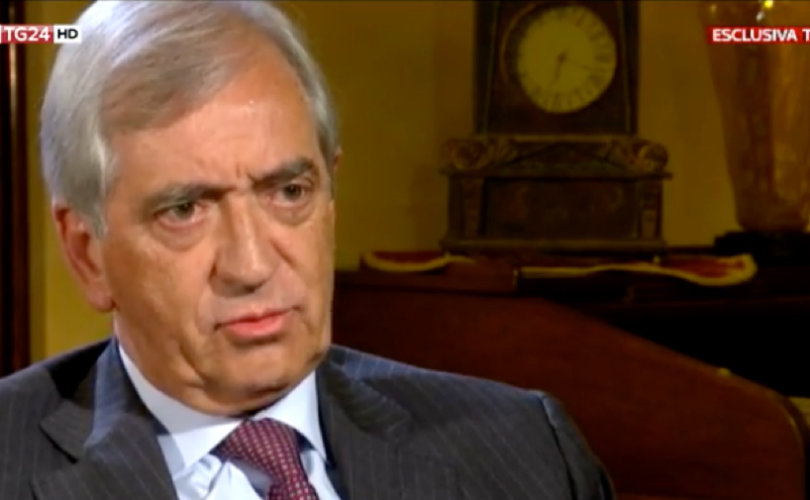 VATICAN CITY, July 10, 2018 (LifeSiteNews) — The Vatican has dropped a criminal investigation against Libero Milone, a Catholic layman they hired to audit their finances. This despite the fact that in September the Vatican chief of police, Domenico Giani, told Reuters that there was “overwhelming evidence” against the former Auditor General.

Now, however, Edward Pentin of the National Catholic Register has reported that “the separate inquiry conducted by the Vatican promoter of justice with Milone’s lawyers came to the conclusion that no evidence existed to support the accusations that had been lodged against him.”

Pentin also cited an unnamed source who had told the Register on July 5 that Milone had “apparent apparently stumbled upon certain and clear abuses of funds, and they could no longer wait to remove him.”

The Register source also said, “From the beginning of his mandate, the auditor general was marginalized and his work impeded: The old guard wouldn’t give contracts to his staff, they strove to wear down his staff’s nerves, and deprived him of access to the Pope.”

Finally, the source alleged that the old guard would have let Milone continue if he hadn’t been so “professional”. Together with Cardinal George Pell, then the first Prefect of the newly-formed Secretariat for the Economy, Milone was apparently “increasingly effective” and “came too close to uncovering dangerous things.”

“In the end, action had to be taken to stop him,” said the Register’s source.

Milone, the Vatican’s first Auditor General, resigned from his position in June 2017 after being threatened by the Vatican police with arrest. On July 7, he told an interviewer from Italy’s RAI television network that he had been informed by that Vatican that a criminal investigation into his work had been shelved.

Milone has always maintained his innocence. In September he broke his silence to tell interviewers from around the world that his forced resignation was an attempt to block his investigations into Vatican finances, the job he was hired by Pope Francis in 2015 to do.

Originally hired on with a staff of 12 people, Milone was touted as the man who would usher in a new age of transparency into the murky world of Vatican bookkeeping.

“I was threatened with arrest,” he told reporters in September. “The head of the [Vatican] Gendarmerie intimidated me to force me to sign a resignation letter that they had already prepared weeks in advance.”

According to Milone, the Vatican police told him that he had been the subject of a seven-month investigation.

“The facts presented to me on the morning of [June] the 19th were fake, fabricated,” he stated. “I was in shock. All the reasons had no credible foundation.”

The auditor said that he had found “irregularities” in the Vatican’s finances but could not describe them in detail because he had signed a non-disclosure agreement.

He also alleged that he had not been allowed access to Pope Francis after April 2016.

Milone told reporters that he had “wanted to do good for the Church, to contribute to the reform process, as I was asked, but they wouldn’t let me.”

After his September interview, the Vatican vehemently denied Milone’s allegations that he had been framed.

Cardinal Giovanni Angelo Becciù, who was then the Vatican undersecretary of state, told Reuters that Milone had gone “against all the rules and was spying on the private lives of his superiors and staff, including me. If he had not agreed to resign, we would have prosecuted him.”

The Register tried to contact Cardinal Becciù on July 5, but his secretary said he was on vacation.

Becciù has made headlines before, not only for stating that the Vatican is not a “den of thieves” but for hitting back at allegations that there is a gay lobby in the Vatican. Cardinal Becciù was also Pope Francis’ special delegate to the Order of the Knights of Malta shortly after the Pope demanded Fra Matthew Festing’s abdication as their sovereign.