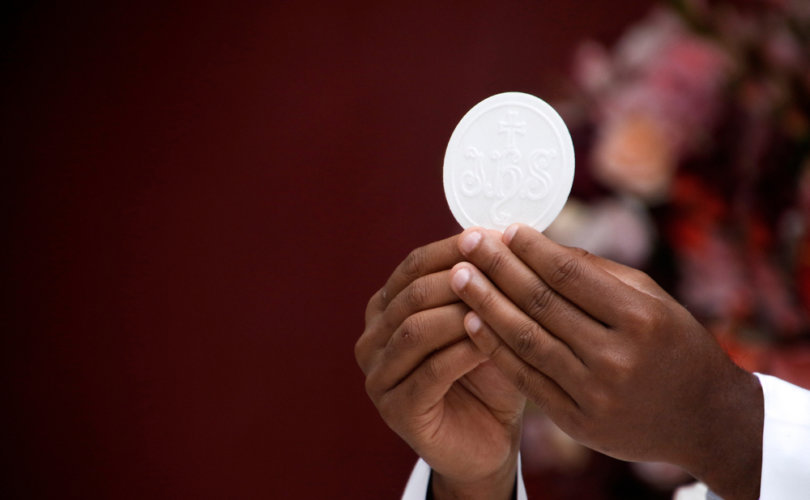 KNOXVILLE, Tennessee, December 11, 2020 (LifeSiteNews) – The signature of the Vatican’s liturgy chief is missing from a controversial letter signed by the secretary of the Vatican body that supervises worship and sacraments in the Church. The letter supports the decision of a U.S. bishop to ban reception of Holy Communion on the tongue in his diocese on account of the coronavirus outbreak.

In a letter from the Congregation for Divine Worship and the Discipline of the Sacraments dated November 13, the Vatican dicastery stated it had “received and attentively studied” a petition from the faithful regarding a decision by Bishop Richard Stika of the Diocese of Knoxville, Tennessee, to ban Holy Communion on the tongue during the COVID-19 pandemic.

“As has already been enunciated in the circular letter of Card. Robert Sarah of August 15, 2020, and approved for publication by His Holiness Pope Francis, ‘in times of difficulty (e.g., wars, pandemics), Bishops and Episcopal Conferences can give provisional norms which must be obeyed’, even clearly, as in this case, to suspend for whatever time might be required, reception of Holy Communion on the tongue at the public celebration of the Holy Mass,” the letter states.

“This Dicastery does hereby therefore act to confirm the decision of Bishop Stika and thereby rejects your petition seeking its modification,” the letter adds.

The letter was signed by Arthur Roche, Archbishop Secretary of the Vatican’s Congregation for Worship and the Sacraments.

The signature of Cardinal Robert Sarah, who is the prefect of the Congregation, did not appear in the document.

The letter contradicts a 2009 letter from the same Congregation regarding the same question in the midst of the H1N1 influenza pandemic. At that time, the Vatican under Pope Benedict, wrote that Church law on the subject stipulates, “each of the faithful always has the right to receive Holy Communion on the tongue” and that it may not be abrogated.

While the document quoted Sarah’s August 15 letter titled “Let us return to the Eucharist with joy!” as justification for suspending Holy Communion on the tongue, at no point in this document did the cardinal make such a point. He only referred to bishops giving “provisional norms which must be obeyed” without mentioning anything about such norms including rules for the reception of Holy Communion.

Cardinal Sarah, when asked in a May 2020 interview during the height of the pandemic about what should be done when Catholics return to churches after the lockdowns and may be told it is “more appropriate” to receive Communion in the hand, replied: “There is already a rule in the Church and this must be respected: the faithful are free to receive Communion in the mouth or hand.”

Indeed, the Church’s 2004 instruction Redemptionis Sacramentum teaches that “each of the faithful always has the right to receive Holy Communion on the tongue.” The Congregation for Divine Worship and the Discipline of the Sacraments under Cardinal Antonio Cañizares Llovera reaffirmed this teaching in the midst of the 2009 H1N1 influenza pandemic, making it clear that a pandemic did not negate this teaching.

LifeSiteNews reached out to Cardinal Sarah with the following questions regarding the letter sent to Bishop Stika from the Congregation which the Cardinal heads.

LifeSite did not hear back by press time.

Dr. Peter Kwasniewski, a Thomistic theologian and liturgical scholar, told LifeSiteNews that the Congregation’s letter to Bishop Stika was “most unfortunate.”

“It undermines the universal norms and tradition of the Church, reiterated many times, concerning the most appropriate and reverent manner for receiving the Holy Eucharist,” he said.

Kwasniewski said that the letter establishes a “dangerous open-ended precedent.”

“Since it is clear from all actual scientific evidence that we are not in a grave pandemic like the 1918 Spanish Flu, much less the Bubonic plague, the decision reflects and reinforces the panic-driven response of civil and ecclesiastical authorities,” he said.

“In this way the CDF's defense of Bishop Stika's policy establishes a dangerous open-ended precedent that can be easily abused, given how often there are seasonal illnesses that threaten the lives of certain members of the faithful. Moreover, since many doctors and pastors recognize communion on the tongue as no less hygienic than communion in the hand (and indeed have argued that communion in the hand presents its own hygienic problems), the decision also betrays a lack of appreciation for the age-old wisdom of the Church as well as a lack of consultation with qualified experts,” he added.

The liturgical scholar noted that the Congregation’s letter only adds to the “worldwide crisis of sacrilege and apostasy” when it comes to Catholic belief.

“Above all, the decision strengthens the worst plague of our time, namely, the utilitarian pragmatism that has made the Mass into a communion service, and communion into a mere token of our belonging, which we feed to ourselves like ordinary food. No emergency could ever justify compelling the faithful, in many cases against their consciences, to adopt a practice that conflicts with the spirit of humble adoration given to Our Lord in the host, whom the Church entrusts to the hands of ordained ministers. In that sense, this decision contributes to the counter-catechesis of bad liturgy that has created a worldwide crisis of sacrilege and apostasy,” said Kwasniewski.

Kwasniewski’s point about the “counter-catechesis of bad liturgy” is backed by data. Last year, Pew research found that only one-third of Catholics believe that the Eucharist is the body and blood of Jesus.

Kwasniewski said the Congregation’s letter to Bishop Stika “far from being the end of this discussion, indicates instead the ill-informed and confusing advice the faithful are receiving from the hierarchy today.”

He cautioned Catholics about the decision, saying that they “cannot be obliged by anyone on earth to violate tradition, law, common sense, conscience, and medical evidence.”