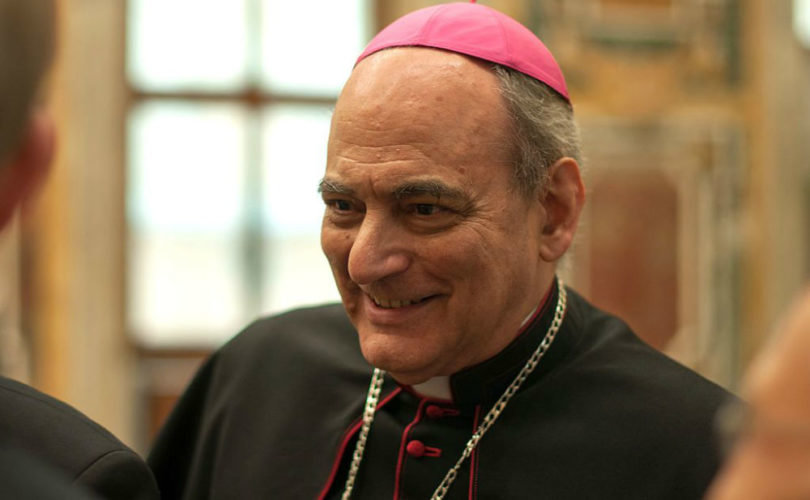 ROME, February 6, 2018 (LifeSiteNews) – According to the head of the Vatican’s Pontifical Academies for Sciences and Social Sciences, China’s current communist regime which is infamous for its massive scale of human rights violations is the “best [at] implementing the social doctrine of the Church.”

Bishop Marcelo Sánchez Sorondo told this to the Spanish-language version of Vatican Insider, and the Catholic Herald translated his remarks.

“The economy does not dominate politics, as happens in the United States, something Americans themselves would say,” he said. “You do not have shantytowns, you do not have drugs, young people do not take drugs.”

China’s support of the globalist Paris Climate Agreement – a deal from which President Trump withdrew the United States – means it has assumed a “moral leadership that others have abandoned,” Sorondo said.

READ: One man, close to the pope, responsible for so much evil in the Vatican

“In 2012, 6.7 million women in China were forced to have abortions under the one-child policy, according to official statistics,” the Washington Post reported in 2015. “Rates in previous decades often topped 10 million a year.”

“I find the Bishop’s remarks frankly incredible,” Reggie Littlejohn, President of Women’s Rights Without Frontiers, told LifeSiteNews. “How could anyone with even passing knowledge of the atrocities committed by the Chinese Communist Party, historically and at present, possibly say that ‘those who are best implementing the social doctrine of the Church are the Chinese’? One of primary social doctrines of the Church [is] respecting ‘life and the dignity of the human person.’”

“The Chinese government has boasted of ‘preventing’ 400 million lives through its One Child Policy. In so doing, women have been forcibly aborted up to the ninth month of pregnancy,” she explained. “Some of these forced abortions have been so violent that the woman died, along with her full term baby.”

China is a top location where gendercide, the practice of killing pre-born baby girls due to a cultural preference for boys, is widely practiced.

“China has also sterilized hundreds of millions of women,” Littlejohn continued. “Some of these forced sterilizations have butchered the women, destroying not only their reproductive health, but their overall health as well.”

And “because of the One Child Policy, there is not enough of a young population to support the elderly. Many elderly are left destitute and elder suicide in China is on the rise.”

“How is any of this consistent with respecting ‘life and the dignity of the human person’ – a doctrine absolutely central to Catholic social teaching?” Littlejohn asked.

Sorondo has been instrumental in bringing globally-recognized promoters of contraception, abortion, and population control to speak at numerous Vatican-run conferences. Some of these include John Bongaarts, Paul Ehrlich, Jeffrey Sachs, and Ban Ki-Moon (here, here, and here).

According to various reports that contradict Sorondo’s claim, China has drug problems.

“The majority of the meth” in the Philippines comes from China, one report states. According to U.S. officials, the majority of synthetic opioids in America are produced in China.

There is wide availability of meth at “the city’s [Beijing] highest density of nightclubs and bars,” according to the New York Times. And “China’s wealthy coastal cities in the south were determined to have the highest total consumption of meth, cocaine, ecstasy and ketamine.”

Sorondo has previously said the Pope’s view on climate change is as authoritative as Church teaching against abortion.

At a 2017 Vatican conference on “biological extinction,” Sorondo said women need “education” so they will have one or two children instead of “seven.”

“Because when you have education, we don’t have childrens [sic],” he said in English. “We don’t have seven children. Maybe we have one children, two children. No more.”

He also suggested that couples consider the “situation of their country” before having kids.

Sorondo’s praise of China comes on the heels of reports that the Vatican is asking China’s Catholic bishops, who face persecution and imprisonment, to step aside so that “bishops” from the Chinese Patriotic Catholic Association, a fake church run by the communists, can take over.