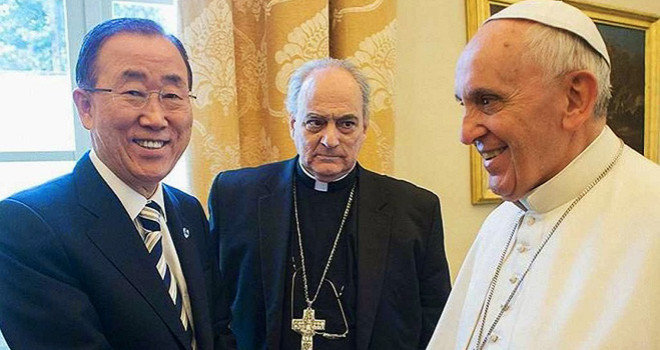 July 29, 2015 (LifeSiteNews) – “The Holy See does not see the United Nations as the devil as certain right-wing thinkers do.” Those were the words of Bishop Marcelo Sanchez Sorondo, chancellor of the Pontifical Academy of Sciences, on July 15 at a Press Conference at the Vatican when presenting about the two recent Vatican conferences on human trafficking and the climate crisis, both of which took place July 21-22 in Rome.

It’s not the first time Sanchez has criticized conservative circles in the Catholic Church opposed to the current close collaboration between the Vatican and the United Nations concerning the question of purported climate change and the new Sustainable Development Goals, which critics warn will be used to support and promote abortion, contraception, and population control.

Previously he responded to pro-life activists who voiced concern about his Vatican office’s collaboration with prominent abortion and population control pushers such as Professor Jeffrey Sachs and UN Secretary General Ban Ki Moon, who headlined an environmental conference at the Vatican at the end of April.

“Unfortunately, there is not only the drama of abortion, but there are also all these other dramas, in which you should also be interested, because they are closely related,” he responded.  “The Tea Party and all those whose income derives from oil have criticized us, but not my superiors, who instead authorized me, and several of them participated,” he added.

Critics of the Vatican’s campaign on climate change recently received the support of Vatican Cardinal George Pell, one of the Pope’s council of nine advisors, who said publicly that the specific portions of the Pope’s encyclical dealing with climate change are of a different weight than the rest. In an interview with the Financial Times, in which he also praised the encyclical, Cardinal Pell included a cautionary note about the scientific aspects saying, “The church has got no mandate from the Lord to pronounce on scientific matters.” The Financial Times article stated that he made the remark specifically in reference to the issue of climate change.

At last week’s press conference, Sanchez also reported that Jeffrey Sachs, an abortion advocate, was again a speaker at one of the two Vatican conferences, namely the July 22 conference on “Prosperity, People and Planet: Achieving Sustainable Development in Our Cities,” jointly organized by the Vatican and the UN's Sustainable Development Solutions Network, which is headed by Sachs himself.

Bishop Sanchez repeatedly insisted that the Church will continue to collaborate with the United Nations on any joint project that “does not go against the doctrine of the Church.”

Asked by a journalist if it was strange that the Vatican would host an event with the UN, Bishop Sanchez said, “The United Nations is not the devil, quite the opposite.” He stressed that the conference was hosted by his Vatican agency, noting that previous popes have visited the UN and that Pope Francis is about to do so in September.

Sanchez also pointed out that these conferences – in which sixty civic mayors from all over the world participated – were initiated by the Santa Marta Group. That group was founded by the pope himself, together with Cardinal Nichols and a few bishops, only a few years ago at the Pontifical Academy of Sciences. When an Italian journalist asked Bishop Sanchez why most of the participating mayors were left leaning, Sánchez Sorondo replied: “The invitation is open to everyone, if you wish to bring other mayors we will be glad to receive them, no one is excluded.”

Conservative critics aren’t the only figures who have pointed out what appears to be a surprisingly leftist tone in some of the recent conferences at the Vatican. According to a July 23 article of the German Branch of Vatican Radio, one of the participating mayors, the Socialist mayor of Paris, France, Anne Hidalgo, was impressed by the presence of many liberal and leftist ideas at the 21 July Vatican conference on human trafficking (“Modern Slavery and Climate Change: the Commitment of the Cities”). She was, she said, “very surprised at the progressive character of all the proposals coming from the mayors.”

Hidalgo said that in her opinion Pope Francis, in his statements on matters concerning the environment, migration, and the economy, is “more courageous than many left-wing politicians,” and willing to say things even leftist politicians would not dare.