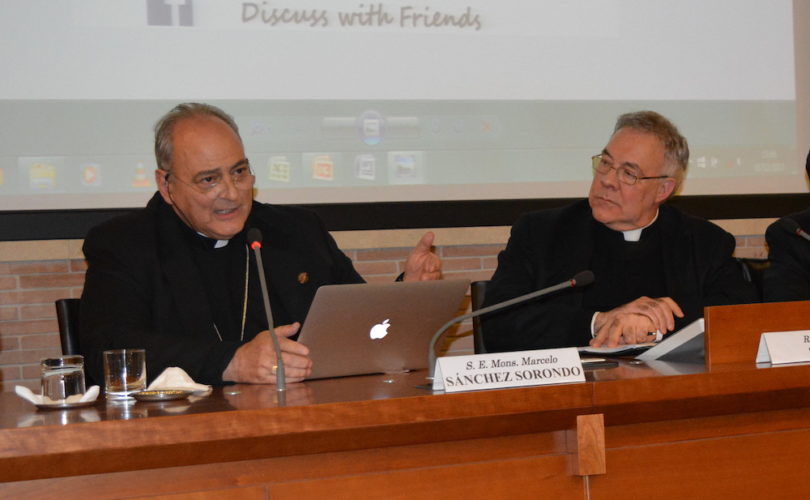 ROME, December 18, 2015 (LifeSiteNews) – A heated exchange regarding global warming and magisterial teaching between a top Vatican official and various other presenters ended a December 3 Acton Institute conference in Rome.  Argentinean Bishop Marcelo Sánchez Sorondo, a close advisor to Pope Francis and the Chancellor of both the Pontifical Academy of Sciences and the Pontifical Academy of Social Sciences stressed that the pope’s declarations on the gravity of global warming as expressed in the encyclical Laudato Si’ are magisterial teaching equivalent to the teaching that abortion is sinful.

Father Joseph Fessio, SJ, the founder of Ignatius Press who obtained his doctorate in theology under Joseph Ratzinger prior to his elevation to the pontificate, told LifeSiteNews, “Neither the pope nor Bishop Sorondo can speak on a matter of science with any binding authority, so to use the word ‘magisterium’ in both cases is equivocal at best, and ignorant in any case.” Fr. Fessio added, “To equate a papal position on abortion with a position on global warming is worse than wrong; it is an embarrassment for the Church.”

The controversy was sparked when in his address Bishop Sorondo spoke of “global warming” saying that in Laudato Si “for the first time in the Magisterium” Pope Francis “denounces the scientifically identifiable causes of this evil, declaring that: ‘a number of scientific studies indicate that most global warming in recent decades is due to the great concentration of greenhouse gases released mainly as a result of human activity.’” He repeated the point later, saying, “faith and reason, philosophical knowledge and scientific knowledge, are brought together for the first time in the pontifical Magisterium in Laudato Si'.”

These points were contradicted in the presentation by Acton Institute founder and President Father Robert Sirico who said it is “important to underscore the distinction between the theological dimension of Laudato si’ and its empirical, scientific, and economic claims.” He explained, “The Church does not claim to speak with the same authority on matters of economics and science… as it does when pronouncing on matters of faith and morals.”

Quoting the Compendium of Catholic Social Doctrine to support his point, Fr. Sirico said: “Christ did not bequeath to the Church a mission in the political, economic or social order; the purpose he assigned to her was a religious one.  . . . This means that the Church does not intervene in technical questions with her social doctrine, nor does she propose or establish systems or models of social organization. This is not part of the mission entrusted to her by Christ” (CCSD 68).

Father Joseph Fessio: “To equate a papal position on abortion with a position on global warming is worse than wrong; it is an embarrassment for the Church.”

When asked in a question and answer period that concluded the conference about the weight of the pope’s opinions regarding global warming in Laudato Si’, Bishop Sorondo distinguished between infallible statements and statements of the pope’s “Ordinary Magisterium.”  The distinction is important because ex-cathedra statements are in Catholic teaching “infallible” or never in error and require absolute adherence by all Catholics, while some of those in the “Ordinary Magisterium” could be in error but nonetheless teachings to which Catholics should submit “in mind and will.”

However, even asserting Pope Francis’ reflections on global warming in Laudato Si’ are part of his Ordinary Magisterium would propose a grave challenge to all those scientists who have asserted global warming is a hoax.

Comparing the Pope’s teaching on global warming to the Church’s teaching on abortion, Bishop Sorondo said the “judgement must be considered Magisterium – it is not an opinion.”

This led to a heated exchange with panel presenters at the conference, especially journalist Riccardo Cascioli, who objected to the suggestion that Catholics must submit to pronouncements on “scientific theories” rather than “faith and morals.”

Pope Francis in Laudato Si’, says, “The Church does not presume to settle scientific questions or to replace politics,” and that he seeks to “encourage an honest and open debate” (para 188). Nevertheless Bishop Sorondo seemed to oppose the contestability of global warming theories.

When Cascioli suggested Catholics could follow their consciences on the theoretical scientific matters, Sorondo rejoined, “If you were a scientist and had a serious (difference of) opinion,” then you could follow your conscience, “but since you are a journalist it is better you follow the opinion of the Pope!” Cascioli reminded the bishop that he too was not a scientist, to which Sorondo replied, “But I am in the Academy of Science of the Pope.”

When Fr. Sirico suggested that there are other experts or scientists with different opinions on the matter of global warming, Sorondo fired back, “But don’t follow them, follow these.  Just like in philosophy, there are many philosophers.. But the Magisterium of the Church follows the philosophy of the being, the person. There are many who say the person does not exist – the Pope does not follow them…. I say it is Magisterium.”

Fr. Fessio was unabashed in his criticism. “Bishop Sorondo is unknown to me, and – judging by this statement – eminently worthy of that ignorance,” he commented. “The best I can say of his remarks is that they seem to have been unprepared.”

Translations from Italian were done by Maria Dalgarno.