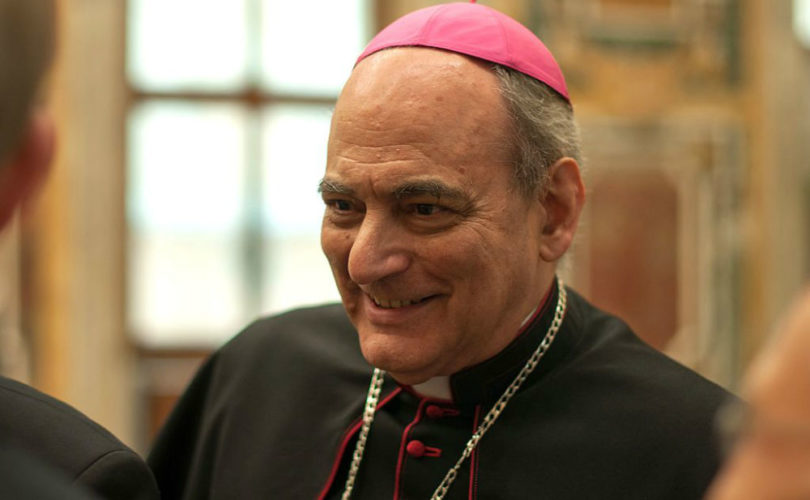 VATICAN CITY, May 17, 2017 (LifeSiteNews) – Pope Francis says he won’t “proselytize” during his meeting with Trump next week, but one Vatican bishop insists the pope will indeed convert him on one thing: climate change.

Bishop Marcelo Sánchez Sorondo, the influential and controversial chancellor of the Vatican’s Pontifical Academies of Science and Social Sciences, made the claim in an interview published Monday by ANSA.

“They will come to an agreement, since the president claims to be a Christian, and so he will listen to him,” Sorondo said.

Pope Francis is set to receive Trump the morning of May 24 at the Apostolic Palace.

The pope has made the issue a hallmark of his pontificate, most prominently in his 2015 encyclical Laudato Si’. The pope has strongly endorsed the claim that humans are in large part responsible for climate change.

Trump, on the other hand, is skeptical of manmade climate change. During the presidential campaign, he promised to withdraw the U.S. from the Paris Climate Accord. He signed an executive order in late March undoing much of the environmental legislation put in place by former President Barack Obama. He ordered the Environmental Protection Agency (EPA) to remove the climate change page from its website. And he appointed an EPA critic, Oklahoma Attorney General Scott Pruitt, to head the agency.

Trump’s views are ‘against science’: Sorondo

Bishop Sorondo claimed in his interview ANSA that Trump’s choices on climate “are against science, even before being against what the Pope says.”

“When he was preparing the Laudato Si', oil lobbies did everything in their power to prevent the Pope from saying what he did,” he explained, “meaning that climate change is caused by human activity that employ fossil fuels.”

“Perhaps the oil companies wanted a 'light' encyclical,'” he continued, “a romantic one on nature that wouldn't say anything at all.”

“Instead, the Pope followed what the scientific community says,” said Bishop Sorondo. “If the president does not follow science, then that is the president's problem.”

The danger, he says, is that “the US president influences others, and scientific findings are being cast doubt on” and “truths begin to be denied.”

Pope: ‘I am not one to proselytize’

Pope Francis has sent confusing messages in regularly partnering with radical environmentalist and population control advocates within and outside the United Nations. At the same time the Holy See has clarified that it opposes any interpretation of the UN’s Sustainable Development Goals (SDGs) that could be used to support abortion, contraception, population control or gender ideology.

On the papal plane traveling back from Fatima, Portugal last weekend a reporter questioned Pope Francis about his differences with Trump on climate science.

Asked whether Trump would “soften his decisions” on climate change and welcoming migrants after he meets with the pope next week, the pontiff said that on both religious and political issues, “I am not one to proselytize.”

Care for creation, with a human cost?

Pro-life supporters frequently warn how the population control and pro-abortion movements often advance their agendas via the environmentalist and anti-poverty causes.

It has been Bishop Sorondo who often oversees the numerous Vatican visits where extreme environmentalist, feminist, population control and pro-abortion supporters, often affiliated with the United Nations (UN), have been given a speaking platform.

He has advocated the climate change issue as a Vatican representative in other venues as well.

At a December 2015 conference on Laudato Si at Pontifical University of the Holy Cross in Rome Bishop Sorondo claimed the Pope’s teaching on global warming in the environmental encyclical was equally binding for Catholics as the Church’s teaching on abortion.

In a panel discussion at a Vatican conference on Biological Extinction earlier this spring, Bishop Sorondo suggested there is confusion over the Church’s teaching on procreation and fertility. He approvingly suggested that when people are educated they have fewer children.

He would go on to say it is an obligation for the Church to say the state has a responsibility for its citizens’ well being, and “in this capacity it is legitimate for the state to intervene to orient the demography of the population.”

Bishop Sorondo told ANSA that the Pontifical Academy for Science is holding a meeting in November on the effects of climate change on human health.