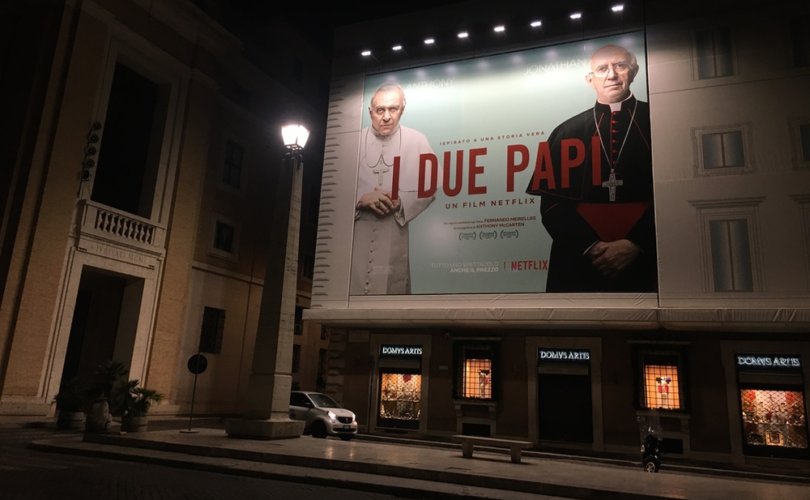 Advertising on a Vatican-owned building outside of St. Peter's Basilica for Netflix's "The Two Popes," Rome, Dec. 17, 2019.Diane Montagna / LifeSiteNews

ROME, December 17, 2019 (LifeSiteNews) — A Vatican-own building just steps away from St. Peter’s Basilica in Rome is hosting a billboard-sized ad for a Netflix film that portrays Benedict XVI as an incompetent pope who looked to the man who would become “Pope Francis” as the one chosen by God to “change” the Church.

Due for online release on December 20 by Netflix, “The Two Popes” is advertised on a giant billboard displayed on a building that is reportedly owned by the Vatican on the Via della Conciliazione at the gates leading to St. Peter’s Square.

Cindy Wooden of Catholic News Service released a photo of the billboard on social media with the caption: “Advertising on a Vatican-owned building. Netflix. The Two Popes.”

A blurb released by Netflix about the film states: “At a key turning point for the Catholic Church, Pope Benedict XVI forms a surprising friendship with the future Pope Francis. Inspired by true events.” On the IMDB.com website, a clue to the plot states: “Behind Vatican walls, the conservative Pope Benedict and the liberal future Pope Francis must find common ground to forge a new path for the Catholic Church.”

A preview for the film shows Pope Benedict, played by Anthony Hopkins, saying that he as pope was in need of a “correction.”

“There is a saying, ‘God always corrects one pope by presenting the world with another pope.’ I should…I’d like to see my correction,” he states.

At another moment, Pope Benedict, speaking to Cardinal Jorge Bergoglio, the man who would become Pope Francis, states: “You are the right person, the Church needs to change and you could be that change.”

The film was released in the US and UK cinemas at the end of November. It is based on screen writer Anthony McCarten’s 2017 play “The Pope.” It has been nominated for four Golden Globe awards.

Despite Netflix’s affirmation of some basis in history, Professor Juan Orellana, who is the director of the film department of the Conference of Spanish Bishops, said: “It is a make-believe film. If it were not based on facts and real people, and there was not more than enough documentation, we could say that it is a beautiful and emotive film, but it is not real.”

Orellana, who teaches cinematography at a Spanish university, told El Confidencial of Spain that director Fernando Meirelles “did not bother to learn Benedict’s personal characteristics, nor does he try to reflect his personality.”

Professor Orellana analyzed the message conveyed by The Two Popes to be one in which the former Cardinal Jorge Bergoglio is posed as “good Church” because of his reputed friendliness and reformist agenda, while Pope Benedict is an “unrecognizable” figure “obsessed by [opposing] homosexual ‘marriage,’ denying Holy Communion to the divorced, and with maintaining certain formal customs.”

Moreover, Orellana told El Confidencial that the film does nothing to illustrate Pope Benedict’s “refined theology,” his inquisitive intellectual abilities, “exquisite sensibility nor his refined education.” The film, he said, depicts Benedict as a “harsh, brusque man, who has no friends.” Orellana said that even worse than that, the film portrays Benedict resigning the papacy because of God’s supposed silence. Nothing could be further from the truth, said Orellana.

According to Orellana, it is Francis who purportedly manages to humanize the retiring Benedict in the film.

As for director Meirelles, he is a Catholic but attends Mass infrequently. He told La Vanguardia of Spain that he sees himself as Francis’s defender and feels closer to him than to Benedict.

A Brazilian, Meirelles said that Francis “understands the common home,” in a reference to terminology used during the Amazonian Synod of October to underscore environmentalist issues. “All the leaders of the world are building walls,” Meirelles said, “while he is offering bridges,” in a reference to the current Pope’s criticisms of President Trump’s immigration policy.

Reportedly, the Vatican did not cooperate with the filming of The Two Popes nor was it shot on Vatican grounds.