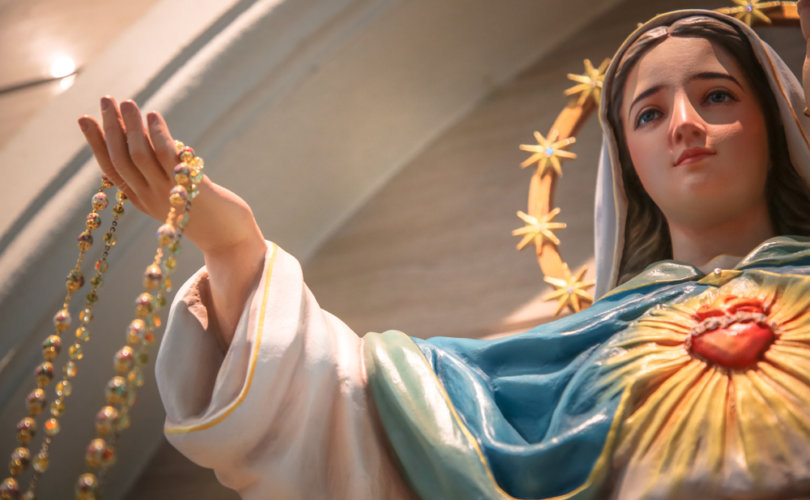 January 13, 2020 (LifeSiteNews) – “Catholics can no longer remain silent.” In a ringing call of awakening, Cardinal Robert Sarah voiced his condemnation of a series of desecrations that have hit Europe and especially France during the past few days. He tweeted on Friday at 4:39 pm, European time:

“Desecrations are on the rise in Europe. Recent acts targeting statues of the Virgin Mary in French churches, show the extent to which these gestures are the result of barbaric hatred. They call for reaction. Catholics can no longer remain silent. +RS”

A wave of profanations took place in southwest France on Thursday morning, where no less than five statues of the Virgin Mary were found toppled and smashed in three churches on the territory of the parish of Christ the Savior.

The three aggressions took place in less than an hour between 9:30 and 10:15 a.m. in the churches of St. Martin; St. Jacques, where the damaged statue represented Our Lady of Lourdes; and Notre Dame.

Later in the day, in the same town of Pau, some 25 miles to the northeast of Lourdes where Our Lady appeared to St. Bernadette in 1853, another statue of the Virgin Mary was damaged in the Nativity scene on display in the church of St. Julien de Lons.

Later still, near nightfall, three more statues of the Virgin were destroyed in the parish churches of the nearby villages of Denguin, Artix and Mourenx, all in the Béarn region near the foothills of the Pyrenees.

In the church of Artix, two women were praying in a side chapel when they heard a loud noise and felt the building tremble “as if in an earthquake,” they said. They quickly went to see what was happening and found the statue broken on the floor, having damaged the altar in its fall.

In St. Paul of Mourenx, a large and heavy statue, which had been sealed to a marble base 10 years earlier, was also smashed. Parishioners sadly told the local press that their community had already made a collection 10 years ago to pay for a new statue because the former one had also been vandalized. “What do they do it for? Destroying for destruction’s sake,” one local Catholic told La République des Pyrénées.

“The modus operandi is the same as in Pau, which suggests that these acts of vandalism were committed by one and the same person or group of persons, acting with the same intention as in Pau,” said Olivier Drapé, communications officer of the Diocese of Bayonne, Lescar and Oloron.

While a man has been held for questioning by local police, witness accounts of the events do not all concur and one parishioner remarked that “there had to be more than one of them to be able to pull down and topple the statue.”

“Attacking the Virgin amounts to fanaticism,” added André Dureysseix, who found the large and heavy statue of St. Jacques of Pau in smithereens when he went to open the church on Thursday afternoon.

“We don’t understand, and it hurts. Before, they would steal candles, now they are going after statues and in particular the Virgin Mary. Who will be next?” he told France-Bleu radio.

A statement by the Diocese of Bayonne made clear that these events are part of a pattern that is becoming increasingly pervasive. “Generally speaking, the number of anti-religious or racist provocations and attacks (such as the desecration of the Jewish cemetery in Bayonne last weekend) continues to grow in our country, where 1,704 anti-religious acts (1,063 anti-Christian acts, 541 anti-Semitic acts and 100 anti-Muslim acts) were recorded by the Ministry of the Interior in 2018. … It would be irresponsible not to be concerned about them or to downplay their gravity,” it said.

On Thursday, before the four last desecrations had been discovered, Bishop Marc Aillet of Bayonne made the following personal statement that repeated the above statistics.

“Having been informed by Fr. Jean-Jacques Dufau, parish priest of Christ the Savior in Pau, that five statues of the Blessed Virgin have been found overturned and broken in three churches of the parish (Notre-Dame, Saint-Martin and Saint-Jacques), I cannot but react.

“This is not only a totally unacceptable act of vandalism, but a sacrilege that deeply offends the faith of believers, in whose eyes the Virgin Mary is the Mother of God, the Mother of the Church and the Mother of us all.

“A complaint was, of course, lodged with the police this morning.

“In Pau, a Mass, followed by a prayer vigil, will be celebrated on Tuesday January 14 at 7 p.m. in the church of Notre-Dame, in reparation for the outrages committed against the Immaculate Heart of Mary.

“Let us not be afraid, in these circumstances, to invoke the protection of the Blessed Virgin Mary: ‘O Mary, conceived without sin, pray for us who have recourse to thee’.”

Fr. Dufau also spoke with the press, insisting that churches should be able to be kept open.

“It’s the first time I’ve seen anything like this,” he told the local media. “It shows that nothing has any importance or value any longer. I am deeply saddened and shocked. These statues represent the Virgin Mary, who symbolizes the love of God and the tenderness of a mother; all that has been trampled on.” He underscored that two of the statues that had been destroyed in his parish dated to the 19th century and were classified as works of art.

As to the man who was interrogated “incidentally” in Mourenx on Thursday evening, according to the public prosecutor Cécile Gensac, “a connection was immediately made,” partly thanks to the video surveillance films from Pau. She added that inquiries would continue to determine whether he can be accused of all of the desecrations and acted alone.

The homeless man, 35, who has been living in Pau for years, was questioned at first when he started insulting the police. Once arrested, he maintained a stubborn silence, to the point where the police handed him over to the psychiatry department of the local hospital in Pau, where he will remain until he is deemed capable of answering the police.

French observers will have noted the similarity with reports of recent Islamic attacks against persons in France: as a rule, they are immediately attributed to “unbalanced individuals” with no terrorist intentions.

But it is also true that in the case of anti-Christian attacks on churches and cemeteries, whose numbers have been rising over the past few years, profanations and desecrations are often perpetrated by Satanists or members of the “Gothic” culture who are usually French adolescents and young adults. In all cases, public authorities tend to downplay the anti-Christian nature of these acts, even when they are openly and evidently aimed at the most sacred symbols of Catholicism.

At the time of this writing, local political representatives have voiced their concern and solidarity with Catholics in their constituencies, but there has been no reaction from Pau Mayor François Bayrou or from national politicians.

When a synagogue or a mosque is tagged, government officials usually waste no time making public declarations in favor of “national unity” and against “racism.”

Which is probably why Cardinal Sarah, in his tweet, so urgently called for “reaction,” suggesting that Catholics should underscore the gravity of what is happening to churches and sanctuaries in France and Europe after having been “silent” for too long.

According to “L’Observatoire de la christianophobie”, a website that records anti-Christian acts in France and beyond, the destruction of statues of Our Lady in southwest France are far from being the only desecrations that have happened recently in Europe.

The Observatoire published a series of reports showing that acts of varying gravity have been committed in the past few weeks.

A tabernacle was stolen along with the consecrated hosts contained in a chapel next to the parish church of La Regrippière near Nantes in the West in France on December 30, probably with sacrilegious intentions as precious chalices were left standing in easily accessible cabinets in the same space.

On New Year’s Eve, the Thomaskirche, a historic evangelical church in Leipzig, Germany – Johann Sebastian Bach is buried there – was stoned by unidentified individuals who broke 25 Art nouveau stained-glass windows.

An arson attack on the Christmas crib took place in the Holy Spirit Catholic church of Ratingen, Germany that same night. The next morning, it was found burned down while the building itself had mercifully escaped destruction.

A few days later, in the parish church of St. Marie in the Crozon peninsula near Quimper in Brittany, France, the Christ child was stolen from the Nativity scene, an antique statue weighing about 10 kg. Posters inviting the public to a “living crèche” were found crumpled and torn in the church font.

On January 5, the Christ child was stolen from a Nativity scene in the parish church of Mer-les-Bains on the Channel coast in the north of France. The statue had no particular value but the faithful of St. Martin’s parish church were sentimentally attached to the unusual Baby Jesus sucking his thumb brought back from Portugal by a former rector in the 1960s.

On January 6, in the Belgian town of Vilvoorde, the Nativity scene was completely destroyed by fire. A police inquiry is in progress.

On January 8, two Chaldean Christians discovered that an unknown person had defecated behind the baptismal font of Our Lady of the Immaculate Conception in Elbeuf, Normandy in the North of France. They cleaned up the mess themselves and informed the Observatoire.