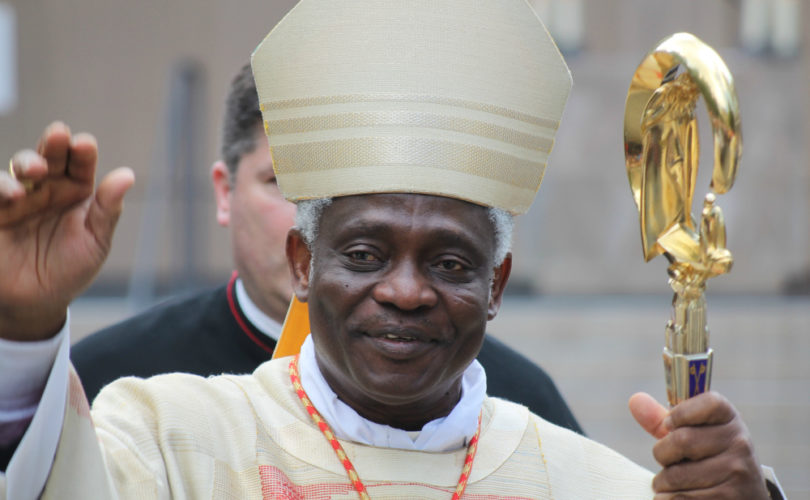 Cardinal Peter Turkson, president of the Vatican's Pontifical Council for Justice and Peace

PARIS, December 9, 2015 (LifeSiteNews) – In an interview this morning, Cardinal Peter Turkson, president of the Vatican’s Pontifical Council for Justice and Peace, said that Pope Francis “has called for a certain amount of control of birth,” while specifying that this would not include methods like the birth control pill.

Speaking to the BBC outside of the climate change talks in Paris, the cardinal suggested that limiting births can “offer a solution” to difficulties such as water and food shortages that are said to come from overpopulation and climate change.

“The amount of population that is critical for the realisation of this is still something we need to discover, yet the Holy Father has also called for a certain amount of control of birth.”

Cardinal Turkson, described by the BBC as the Vatican expert on climate change, said while the critical level of population remains to be determined, the pope has nevertheless called for control of births.

“Having more mouths to feed is a challenge for us to be productive also, which is one of the key issues being treated over here, the cultivation and production of food, and its distribution,” he said.

“So yes it engages us in food security management, so we ensure that everybody is fed and all of that. The amount of population that is critical for the realisation of this is still something we need to discover.”

“This has been talked about,” he added, “and the Holy Father on his trip back from the Philippines also invited people to some form of birth control, because the church has never been against birth control and people spacing out births and all of that. So yes, it can offer a solution.”

The cardinal was referencing Pope Francis’ in-flight interview on the return from Manila where the pope urged “responsible parenthood,” and chastised a woman as irresponsible for having seven children by C-section. The pope said Catholics should not breed “like rabbits.”

While advocating control of births, Turkson specified that he was not endorsing the birth control pill. “You don't deal with one good with another evil: the Church wants people to be fed, so let's do what the Church feels is not right? That is a kind of sophistry that the church would not go for,” he said.

The cardinal was likely referring to natural family planning, a method of birth regulation which allows a couple to know when the fertile times of the woman are so that they might either achieve or avoid a pregnancy.