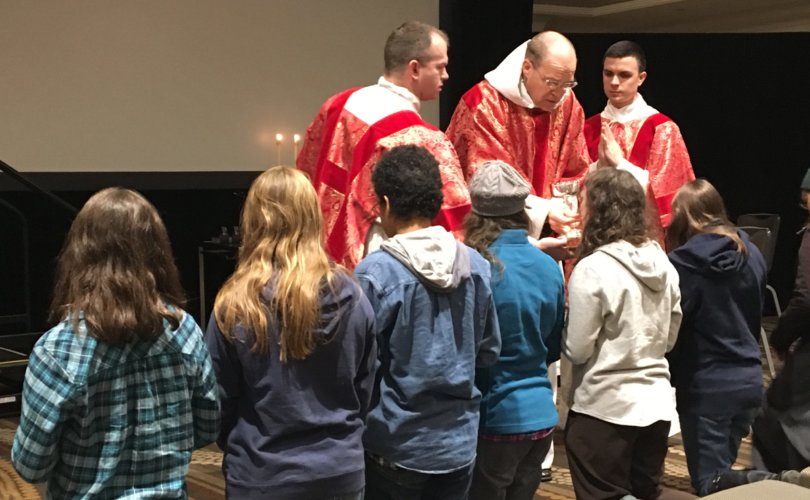 An SSPX priest distributes Holy Communion at a Mass before the 2017 March for Life.Lisa Bourne / LifeSiteNews

March 9, 2017 (LifeSiteNews) – In an explosive homily delivered Sunday, the leader of the Society of Pius X (SSPX) said the Prefect for the Congregation of the Doctrine of the Faith wants the SSPX to be fully reconciled to help fight modernists in the Church.

“Bishop [Bernard] Fellay [reported] the comments of Cardinal (Gerhard) Muller asking the SSPX to join his fight against the modernists,” according to the SSPX's USA District.

Fellay said “there is much contradiction” among Church leaders with regard to the SSPX, which had a break with the Vatican over Vatican Council II.

Some consider the group, which has a canonically irregular status but valid ordinations and faculties to hear Confessions, schismatic. Others, like Pope Francis, acknowledge that it is Catholic.

“There is a battle between the bishops, among the cardinals, this is a new situation,” said Fellay. “Rome is no longer one, it is divided. And in such a way that some see that things have gone too far. And they say 'you have to do something, you have to resist.'”

The good news, according to Fellay, is that “there are other [prelates] who speak, who resist” errors perpetuated by the ongoing crisis within the Church, meaning the SSPX “are not alone … a whole work of renewal of the Church has begun.”

Fellay said he has received letters of support from other bishops and priests.

Fellay addressed the SSPX being offered a personal prelature within the Church. He said that such an arrangement would include the prelate of the SSPX being a bishop – and the Society having auxilliary bishops as well. The Pope would choose the bishop based on names submitted to him by the SSPX.

“Everything that exists now will be recognized all over the world,” said Fellay. “And the faithful also! They will be in this Prelature with the right to receive the sacraments and teachings from the Society’s priests. It will be also possible to receive religious congregations, as it is in a diocese: Capuchins, Benedictines, Carmelites, and others. This prelature is a Catholic structure which is not under the [authority of the local] bishops. It is autonomous.”

However, “we must go [forward] with great prudence and also secure our future to be able to prevent any possibility of trap. Therefore, we are not running in this situation,” he said.

The issues the Society has with certain portions of the Second Vatican Council “are open questions” in discussions of reconciling the SSPX, said Fellay. This could mean, as Italian Archbishop Guido Pozzo has said, that the SSPX may come back to full Communion despite not accepting all of Vatican II – because certain documents from the Council are not doctrinal in nature.

Just as it took President Nixon to open up American relations with China, it may take Pope Francis to fully bring the SSPX back into the Church.

This is because, Fellay said, Pope Francis is “a pope who does not care for doctrine, who looks at the people, and who has known us in Argentina.” The SSPX's issues with Vatican II perhaps would have been harder for previous popes to overlook. Pope Emeritus Benedict XVI, for example, played a prominent role at the Council.

“And [Pope Francis] appreciated our work in Argentina,” Fellay continued. “And that's why he sees us with a good disposition while in the same time he is against conservatism. This is like a contradiction. But I have been able to verify several times that he really does things personally for us.”

But “whether or not we are going to get an upcoming recognition, I do not know,” said Fellay. “I do not think so, but the pope can make a surprise … we must continue to pray much, to ask our Protectress, the Blessed Virgin Mary, to continue to lead us.”