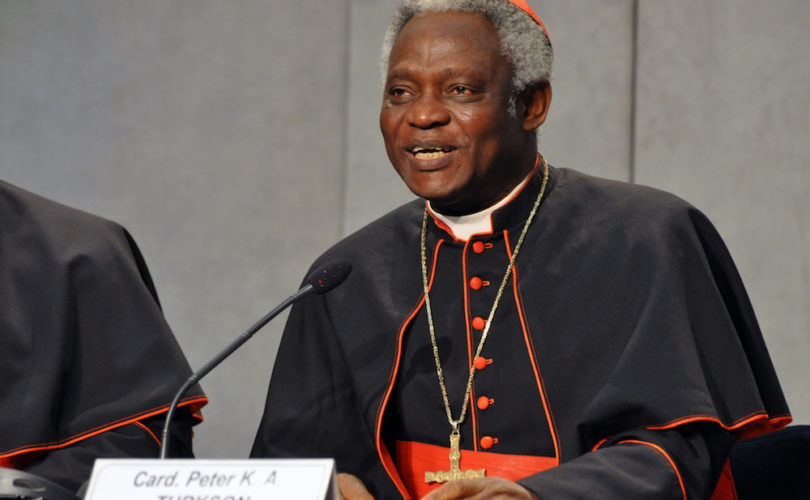 During the BBC interview, Turkson, president of the Vatican’s Pontifical Council for Justice and Peace, said that “birth control” could “offer a solution” to the impacts of climate change. “This has been talked about,” he said, “and the Holy Father on his trip back from the Philippines also invited people to some form of birth control, because the church has never been against birth control and people spacing out births and all of that. So yes, it can offer a solution.”

Cardinal Turkson explained to Aleteia that the BBC reporter had used the expression “birth control” and he was responding in kind, but “my intention was to present the Church as not inimical or opposed to the idea of spacing births,” he said.

Another controversial aspect of the BBC interview was the cardinal’s suggestion that Pope Francis himself had called for “control of birth.”  Speaking of difficulties such as water and food shortages that are said to come from overpopulation and climate change, he added, “The amount of population that is critical for the realisation of this is still something we need to discover, yet the Holy Father has also called for a certain amount of control of birth.”

The cardinal was referencing Pope Francis’ in-flight interview on the return from Manila where the pope urged “responsible parenthood,” and chastised a woman as irresponsible for having seven children by C-section. The pope said Catholics should not breed “like rabbits.”

Addressing this point with Montagna, Cardinal Turkson called the pope’s use of the expression ‘breeding like rabbits’ “unfortunate”.

Those “unfortunate” remarks of the pope received some of the most severe backlash from Catholics and resulted in Pope Francis’ first public walkback of his statement.  In comments to the Italian bishops’ newspaper Avvenire shortly after the pope’s in-flight interview, Vatican Archbishop Giovanni Becciu said, “The Pope is truly sorry” that his remarks about large families “caused such disorientation.” Archbishop Becciu said the pope “absolutely did not want to disregard the beauty and the value of large families.”