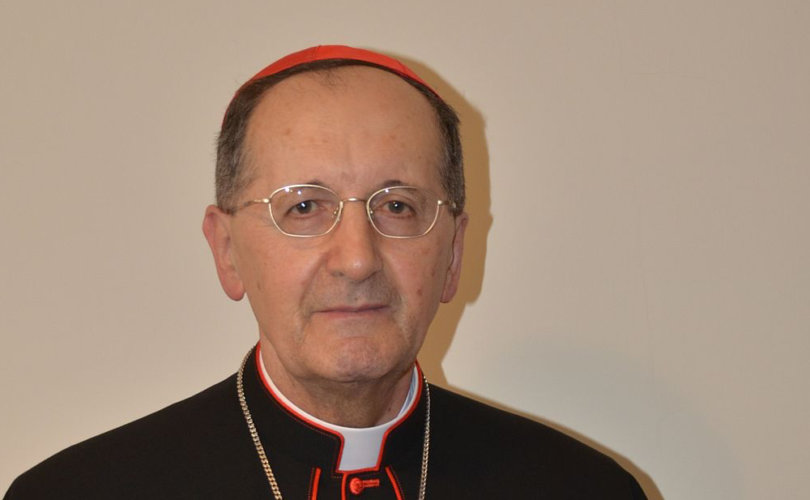 January 23, 2018 (LifeSiteNews) – The cardinal who heads the Vatican's Congregation for the Clergy suggests in a new book that the Catholic Church should consider ordaining married men in some cases.

The Church shouldn’t be “closed or rigid” as it considers this topic, Prefect of the Congregation for the Clergy Cardinal Beniamino Stella wrote in Italian in All Francis’ Men, just released Monday. The Catholic Herald first translated Stella’s proposition.

In remote places “there is acute suffering because of a real ‘sacramental emergency,’ which the few priests present are not able to accommodate,” Stella wrote.

“Continuing to maintain their family and jobs and receiving a formation contextualized for their environment,” married priests “could offer part-time service to the community they come from in order to guarantee the sacraments, especially by presiding at the Eucharistic celebration,” the cardinal mused. The Church should see if “the [Holy] Spirit suggests something” and use “a widespread ecclesial discernment” on this topic.

Married men in Catholic Eastern Rites can already be – and regularly are – ordained priests. Similarly, some married Protestant pastors who become Catholic may be granted special permission to then be ordained Catholic priests.

Canon law says that although a married man can be ordained, already-ordained, celibate men may not marry.

“In the East as in the West a man who has already received the sacrament of Holy Orders can no longer marry,” the Catechism of the Catholic Church explains (CCC 1580).

Priestly celibacy is one of the hallmarks of the Latin Rite Church, even though it is not an official “doctrine.”

Since the Second Vatican Council, the number of Catholic priests around the world has plummeted. In recent years, as the Vatican has explored the possibility of female “deacons” even though canon law says only men may be ordained, high-ranking figures in the Church have suggested allowing married men to become Roman Catholic priests.

Even Pope Francis has weighed in on this debate, saying “we have to think about” married priests.

Cardinal Walter Kasper, who for years has advocated allowing Holy Communion for people who unrepentantly live in objectively sinful situations, said in 2017 there is an “urgent need for action” on the possibility of married priests. He also Pope Francis views the debate “positively.”

“The difficulties” of married priests “are not insignificant,” Longenecker wrote. “The practical problems of Catholics in poor areas supporting a pastor’s wife and children are obvious,” especially given that Catholic priests and their wives would, like other Catholic couples, be prohibited from using artificial contraception.

“Catholics may think it nice and easy to support a married man with two children,” he wrote. “But if the man and his wife are young and fertile, can Catholics support a large clerical family? Do they want to build bigger rectories, pay for Catholic education, the orthodontist, the college fees and all the rest? Are those Catholics who are enthusiastic about having married priests willing to cough up an extra $10 or $20 a week to support them? Children are not really cheaper by the dozen.”

“Most married Catholic priests are staunch advocates of clerical celibacy,” he wrote.

Laity who have no real idea of what priesthood entails and even some priests who have no real idea of what married family life entails both assume normalizing married priesthood would bring about a new, better age for the Catholic Church. But it's an assumption with little supporting evidence. One need only look to the clergy shortage in many Protestant churches to see that opening up clerical ranks doesn't necessarily bring about spiritual renaissance or growth at all, the opposite being just as likely.

But more importantly, calls to change the discipline of celibacy are usually either ignorant or forgetful of what the church calls the “spiritual fruit” of celibacy, something largely incomprehensible in this libertine age, but which is nonetheless still true and essential to the work of the church…

My family and I are not test subjects in some sort of trial run put on by the Vatican to see whether married priesthood works. Rather, we're witnesses to the church's empathy and desire for unity. That's what we married priests wish people would see, the Catholicism we fell in love with and made sacrifices for.

And it's a sacrificial life, one my whole family lives, my wife probably most of all. We've never been busier, never more exhausted, but we've also never been happier. Even my kids make sacrifices every day for the church. It's hard sometimes, but we do it, and joyfully; one, because we've got a great parish that gets it, and two, because we're in a church we love and believe in, not a church we want to change.

Rumors persist in the Vatican that the October 2019 Synod of Bishops for the Pan-Amazon region in Latin America will address or even approve regularizing the ordination of married men to the priesthood.

In 2013 Clelia Luro, a close friend of then-Cardinal Bergoglio and the “widow” of a disgraced Argentinian bishop who would sometimes “concelebrate” Mass with her, predicted Pope Francis may end mandatory priestly celibacy.

“I think it’s going to very hard for him to do it, although I know very well what he thinks and what he wants, because he’s talked a lot with me,” she said. “I think in time priestly celibacy will become optional. I’m sure that Francis will suggest it.”