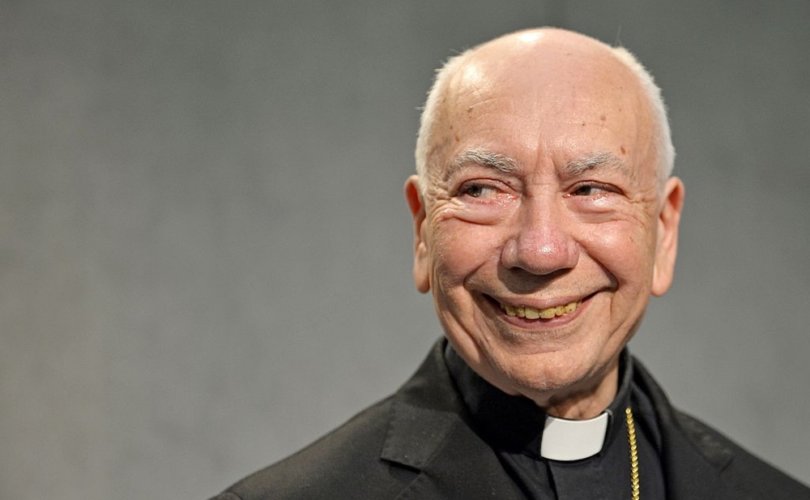 Cardinal Francesco Coccopalmerio, the Vatican’s top canonical official as head of the Pontifical Council for the Interpretation of Legal Texts, said in a 2014 interview that Catholic leaders, such as himself, must “emphasize” the “positive realities” that he said are present in homosexual relationships.

“If I meet a homosexual couple, I notice immediately that their relationship is illicit: the doctrine says this, which I reaffirm with absolute certainty. However, if I stop at the doctrine, I don’t look anymore at the persons. But if I see that the two persons truly love each other, do acts of charity to those in need, for example … then I can also say that, although the relationship remains illicit, positive elements also emerge in the two persons. Instead of closing our eyes to such positive realities, I emphasize them. It is to be objective and objectively recognize the positive of a certain relationship, of itself illicit,” he said in a 2014 interview with Rossoporpora.

When the interviewer noted that some attendees at the Synod on the Family were tending in such a direction towards homosexuals, Coccopalmerio agreed. He then immediately went on to criticize those who feared that “valuing the positive elements” of homosexual relationships would be “undermining” the Church’s doctrine on marriage and sexuality, saying such a conclusion was “problematic.”

Italian media broke the news last week of the Cardinal’s secretary Monsignor Luigi Capozzi being arrested some two months ago in a raid of the former Palace of the Holy Office. Capozzi and others were allegedly engaged in homosexual activities while high on cocaine.

One of the most shocking elements of the scandal is that Capozzi’s arrest came on the verge of him being made a bishop on the recommendation of Coccopalmerio.

“Given the monitoring and whispering that goes on in the Vatican, it is unlikely to the point of absurdity that Cardinal Coccopalmerio was unaware of Msgr. Capozzi's disgusting activities. In fact, when we consider the 300-page document on the homosexual lobby that was handed to Pope Benedict XVI just before he resigned, the probability is that many who work in the Vatican were fully aware of what Capozzi was doing, and that such activities are taking place among other clergy as well,” he said.

The 79-year-old Cardinal has been in the vanguard of advancing Pope Francis’ agenda for the Catholic Church.

Earlier this year, the Vatican's own publishing house released a book by the Cardinal with much fanfare that defended Francis’s 2016 Exhortation Amoris Laetitia as allowing civilly-divorced-and-remarried Catholics living in adultery as well as unmarried cohabiting Catholics living in fornication to receive Holy Communion. Coccopalmerio maintained that the book was his own personal reflection on the matter and carried no legislative weight.

The Cardinal later defended his interpretation of Amoris, even though it contradicted perennial Catholic teaching, stating that what he wrote was no different from conversations he had had with the Pope on the subject.

“I spoke with the Pope at other times about these questions, and we always thought the same,” he said.

Coccopalmerio’s book was later praised by U.S. Cardinal Blase Cupich, who, in a foreword to the English edition of the book, said that it “fully complies with traditional Church teaching on marriage but is also in conformity with accepted standards of a pastoral approach that is positive and constructive.”

Despite being well beyond the age of retirement, set at 75, the Pope has kept Coccopalmerio at his post. This fact becomes all the more interesting given Pope Francis’ recent removal of the 69-year-old Cardinal Gerhard Muller, prefect of the Congregation for the Doctrine of Faith, from his post last week. Muller, unlike Coccopalmerio, has taken an orthodox stand from the beginning of Francis’ pontificate, opposing a liberal interpretation of Amoris Laetitia favored by Francis-supporters.

“The Vatican is now ground zero for a mass apostasy that is happening right now within the Catholic Church,” he said.