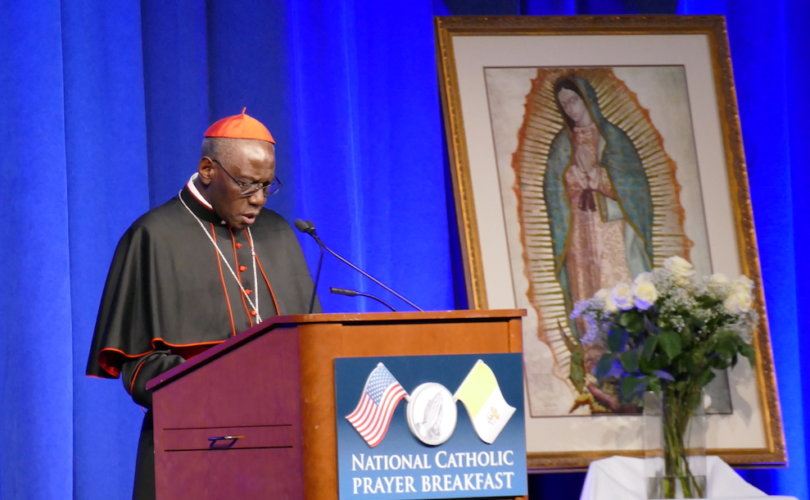 Sarah, the prefect for the Congregation of Divine Worship and the Sacraments, was the keynote speaker at the annual prayer breakfast, where he joined Speaker of the House Paul Ryan and Sister Constance Veit, the director of communications for the Little Sisters of the Poor.  Numerous Catholic bishops and members of Congress, including Apostolic Nuncio Archbishop Carlo Maria Vigano, were in attendance.

“The battle to preserve the roots of mankind is perhaps the greatest challenge our world has faced since its origins,” Sarah told the crowd of nearly a thousand people.  Catholics should follow the “courageous” example of St. John the Baptist, a martyr for the sanctity of marriage, Sarah said.

“Do not be afraid to proclaim the truth with love, especially about marriage according to God’s plans,” said Sarah.  “In the words of St. Catherine of Siena, ‘proclaim the truth and do not be silent through fear.’”

Sarah blasted gender ideology as “ideological colonization” and lamented the “insidious” dismantling of religious freedom in the United States.

“Every human being, like the person of the Trinity, has the capacity to be united with other persons in communion through the…bone of charity of the Holy Spirit,” said Sarah.  “The family is natural preparation and anticipation of the communion that is possible when we are united with God…this is why the devil is so intent on destroying the family.  If the family is destroyed, we lose our God-given anthropological foundations and so find it more difficult to welcome the saving good news of Jesus Christ: self-giving, fruitful love.”

The rupture of the foundational relationships of someone’s life—through separation, divorce, or distorted impositions of the family, such as cohabitation or same sex unions—is a deep wound that closes the heart to self-giving love [unto] death, and even leads to cynicism and despair.

These situations cause damage to the little children through inflicting upon them a deep existential doubt about love.  They are a scandal—a stumbling block—that prevent the most vulnerable from believing in such love, and a crushing burden that can prevent them from opening to the healing power of the Gospel.

Advanced societies, including, I regret, this nation, have done and continue to do everything possible to legalize such situations.  But this can never be a truthful solution.  It is like putting bandages on the infected wound. It will continue to poison the body until antibiotics are taken.

Sadly, the advent of artificial reproductive technologies, surrogacy, so-called homosexual ‘marriage,’ and other evils of gender ideology, will inflict even more wounds in the midst of generations we live with.

This is why it is so important to fight to protect the family, the first cell of the life of the Church and every society.  It is not about abstract ideas.  It is not an ideological war between competing ideas.  This is about defending ourselves, children, and future generations from a demonic ideology that says children do not need mothers and fathers.  It denies human nature and wants to cut off entire generations from God.

Sarah warned that “today we are witnessing the next stage and the consummation of the efforts to build a utopian paradise on earth without God,” a “turmoil” about which Pope St. John XXIII alerted the Church when he announced the Second Vatican Council in the Apostolic Constitution Humanae Salutis.

This effort is in the “stage of denying sin and the fall altogether,” according to Sarah, and its fruits are the suppression of goodness, beauty, truth, and love.

“All manner of immorality is not only accepted and tolerated today in advanced societies, but even promoted as a social good,” he continued.  “The result is hostility to Christians, and, increasingly, religious persecution.  Nowhere is [this] clearer than in the threat that societies are visiting on the family through a demonic ‘gender ideology,’ a deadly impulse that is being experienced in a world increasingly cut off from God through ideological colonialism.”

“I encourage you to truly make use of the freedom willed by your founding fathers, lest you lose it,” the African cardinal advised the faithful.  He cited international religious persecution against Christians and “political, ideological, and cultural” persecution that damages the Christian faith and leads souls astray.

“Do we not see signs of this insidious war in this great nation of the United States?” Sarah asked.  “In the name of ‘tolerance,’ the Church’s teachings on marriage, sexuality, and the human person are dismantled.  The legalization of same-sex marriage, the obligation to accept contraception within healthcare programs, and even ‘bathroom bills’ that allow men to use the women’s restroom and locker rooms.  Should not a biological man use the men’s restroom?  How simpler can that concept be?”

Sarah offered the faithful three suggestions: be prophetic, be faithful, and pray.

“I am confident that your efforts will no doubt contribute to protecting human life, strengthening the family, and safeguarding religious freedom not only here in these United States, but everywhere in the world,” he finished.  “For in the end it is ‘God or nothing.’”

Paul Ryan: ‘Religious liberty is going to make a comeback’

In his address, House Speaker Paul Ryan told attendees, “We have an obligation to advocate for our faith.”

Ryan noted that during his many meetings with individuals struggling with drug addiction, he noticed they often seem to “feel a deep, gnawing pain inside,” a lot of which “stems from loneliness.”

“We all feel loneliness at some level,” said Ryan.  “We all feel that distance from God” and it is turning to God that consoles and heals us, he said.

And “when faith itself is ruled out of bounds, then happiness itself is being placed out of reach.”

“There is a spiritual void that needs to be filled,” continued Ryan.  “Perhaps poverty is God’s way of leading us to contemplate something higher.  The fight against poverty and the need for religious liberty go hand-in-hand.”

It’s not just enough to raise people’s wages and give them jobs, Ryan said.  The spiritual void must be filled.

“When you meet people who have beaten addiction,” he continued, “most of them say something like this, ‘it wasn’t me.  It was God’. … Every good work is the work of God.  It is his grace working inside of us” and realizing that causes a loss of pride and a loss of any sense of despair.”

“There is nothing more life-changing than coming to know the Lord,” said Ryan.

Little Sisters of the Poor: We don’t have a ‘contingency plan,’ we trust in God

Sister Constance encouraged Catholics to be joyful and to view persecutors and adversaries as Christ would.

“Hate crucified love incarnate,” Sister Constance told the packed room.  “The forces of death killed the Lord of life.  So let us not be Christians who communicate Lent without Easter, but believers who know how to speak the truth in joy and love.”

“Even our most cunning adversary is a person longing to love and be loved,” she said.

Sister Constance said that the Little Sisters of the Poor trust in God regardless of the outcome of their ongoing legal case against the Obama administration, which has been attempting to force them to violate their consciences by cooperating with actions that the Catholic Church considers intrinsically evil.  On Monday, the Supreme Court chose not to rule on the case and punted the case to the U.S. Courts of Appeals.  Pro-life groups declared this an initial victory.

“We have no contingency plan, because like [our foundress], we believe that God will never abandon us,” said Sister Constance.  “I don’t say this because it’s a clever sound bite, but because I have deliberately chosen to believe it.”