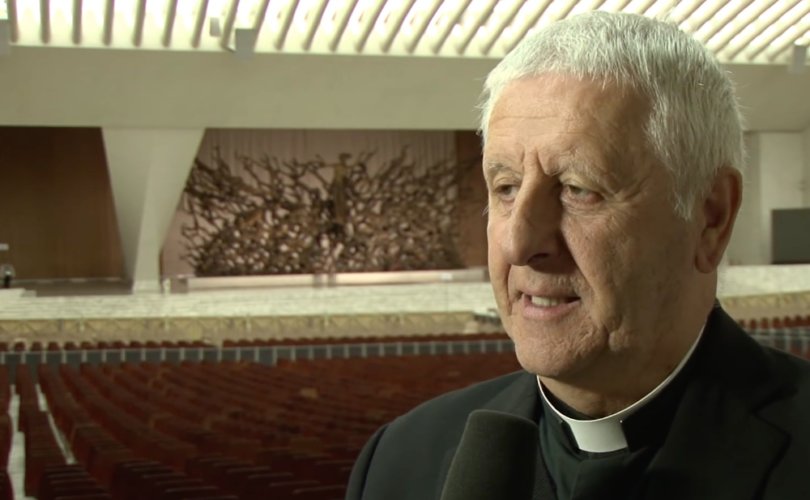 ROME, February 25, 2019 (LifeSiteNews) – Cardinal Giuseppe Versaldi, who heads the Vatican’s Congregation for Catholic Education, dismissed as “useless” an open letter to the Vatican Abuse Summit participants from Cardinals Walter Brandmüller and Raymond Burke that warned against the “plague of the homosexual agenda” and homosexual networks in the Catholic Church.

Cardinal Versaldi was among the churchmen attending the Feb. 21-24 Vatican summit on the sexual abuse crisis rocking the Church, which brought together 190 prelates and heads of congregations ostensibly to address the crisis and consider reforms. The open letter from Burke and Brandmuller came in advance of the summit on Feb. 19. In response, Versaldi told Info Vaticana in a Feb. 23 interview that the “solicitation of the letter, in my opinion, is useless.”

“We participate in the same problem and we have the same responsibilities. Declaring something like this before the summit is not very sensible,” he added, as he rolled his eyes, reported Info Vaticana.

In their open letter, Cardinals Burke and Brandmuller — two of the dubia cardinals — warned, “The plague of the homosexual agenda has been spread within the Church,” which has been “promoted by organized networks and protected by a climate of complicity and a conspiracy of silence.”

At the root of the problem is a crisis of faith, they wrote: “But the first and primary fault of the clergy does not rest in the abuse of power but in having gone away from the truth of the Gospel. The even public denial, by words and by acts, of the divine and natural law, is at the root of the evil that corrupts certain circles in the Church.”

Versaldi told Info Vaticana, nevertheless, that the summit was important because “we were centered in collegiality, in the communion of the Church among bishops, priests and laity. More than anything, to prevent and also condemn abuses.”

The issue of homosexuality did not receive attention at the summit, nor in the remarks that Pope Francis offered to the assembled bishops following the Mass on Sunday as the summit drew to a close. He devoted the first paragraphs of his remarks to issues such as sex trafficking, sex tourism, prostitution, pornography and the internet rather than clerical sexual abuse.

Psychiatrist Dr. Rick Fitzgibbons has pointed out that “clericalism” or “abuse of power” does not “result in a psychological need in a priest for a sexual encounter with another male, especially an adolescent.”