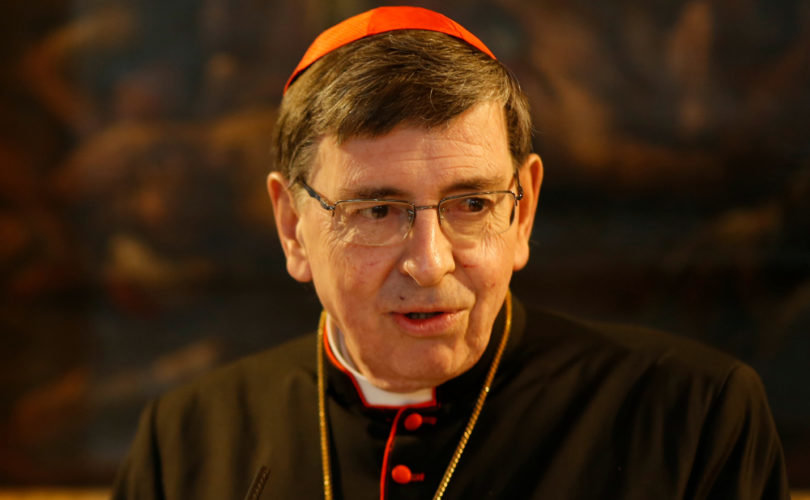 The realities of life 'cannot be a third reality of the revelation next to Holy Scripture and the Magisterium,' says Cardinal Kurt Koch.

ROME, March 26, 2015 (LifeSiteNews.com) – An influential Swiss cardinal at the Vatican has warned Germany’s bishops that the Church cannot merely adapt itself to the times as some Christians did in order to support the Nazis.

In an interview with the German Catholic newspaper Die Tagespost, Cardinal Kurt Koch firmly (but politely) refuted the proposal of Cardinal Reinhard Marx and Bishop Franz-Josef Bode, both delegates to the upcoming Synod on the Family, that the Catholic Church has to adjust herself more to the “life realities” of Catholics today, and liberalize its attitude toward remarried divorcees. Cardinal Marx had even declared that the German bishops will make their pastoral decisions independently of Rome.

Cardinal Koch’s comments followed a strong rebuke of Cardinal Marx by German Cardinal Paul Josef Cordes. “A Cardinal cannot easily separate the pastoral approach from the teaching,” Cardinal Cordes said, “unless he wants to ignore the binding meaning of Christ's words and the binding words of the Council of Trent.”

Cardinal Koch, president of the Pontifical Council for Promoting Christian Unity, said that Bode's words should remind us of a similar historical situation: namely the time of the Third Reich, where the “German Christians” adjusted their faith to the worldview of National Socialism, namely its racist and nationalistic ideas. He said: “Let us think of the 'German Christians' during the time of National Socialism, when, next to the Holy Scripture, they also raised up the Nation and the Race as sources of revelation, against which the Theological Declaration of Barmen (1934) [which rejected the submission of the Protestant churches under the state] protested. We have to differentiate very carefully here and listen with sensitivity to the signs of the times – and to the spirit that reveals itself in these signs: Which ones are signs of the Gospel, which ones are not?”

With this comment, Koch made clear that it is not the Catholic Church's mission to adapt her irreformable teaching to the spirit of the time, the Zeitgeist, but, rather, the Church has to follow Christ's teaching at all times, throughout history.

In this context, it is wise to point to that part of German history, where many Christians, mainly Protestants of the movement called “German Christians,” subjected parts of Christ's teaching under the ideology of Adolf Hitler. Such an adaptation might have sounded convincing at the time, but there will also always be a “time after,” where many Christians then had to regret their inordinate submission to such a false teaching.

In reference to our own time, we can apply Cardinal Koch's words and determine not to adapt to a morally lax atmosphere that has spread throughout the Western world since the cultural revolution of the 1960s, which now also permeates more and more of the culture of the Catholic Church. The standard of Christ is still applicable now, and will always be – it is timely, and timeless.

Cardinal Koch thus insisted that it is dangerous to declare “life realities” as a third source of revelation: “To see how and in which way people are living their Faith today, is of course helpful and important, in order to recognize the challenges of the pastoral duties of the Church. However, this [the “life realities”] cannot be a third reality of the revelation next to Holy Scripture and the Magisterium.”