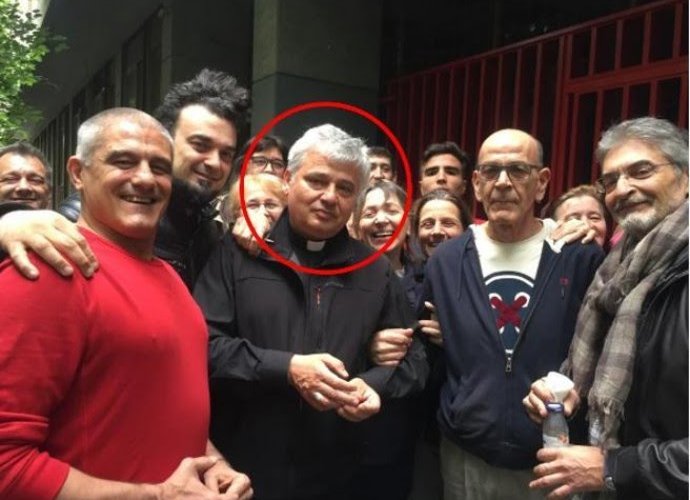 ROME, January 7, 2020 (LifeSiteNews) — The Vatican has been caught up in a scandal over a drug-fueled New Year’s Eve party in Rome attended by minors and featuring Italy’s “most alternative, underground and political queer” techno band.

Last May, the cardinal appointed to handle the Pope’s charitable works broke the law to turn the electricity back on for what appeared to be a group of families occupying the building where the 2020 rave was held.

The papal almoner defended the act as a “humanitarian gesture” aimed at protecting these families.

Yet a closer look reveals that the far-left activists illegally managing the building (and squatters) are running tax-free businesses in the complex, including a disco that hosts homosexual rave parties. This raises the question: Why is the Vatican supporting a radical far-left group that is creating a potentially abusive environment for families, minors and children?

According to Italian media, the New Year’s Eve rave, hosted at Spin Time Labs in an occupied building in Rome’s historic center, was a “triumph of degradation, drugs and crime.”

Il Messagero, the Italian capital’s main centrist daily, reported that problems intensified after midnight, when hundreds of people (some of whom had bought tickets online) found the gates to the disco locked and entrance denied (see video here). “Yelling, shoving, and people falling to the ground” ensued, with inadequate security to handle the crowds. At 2 a.m., local police were reportedly alerted that a fight had broken out, and an hour later an ambulance was called for a 22-year-old young man who was intoxicated.

Local residents, who said they witnessed the midnight commotion, also complained of blaring music and the entrances to their homes being mistaken for a bathroom.

Organized by Spin Time Labs and under the leadership of Action, a far-left group that has occupied the building since 2013, the event was promoted on Facebook, saying: “In Rome, there’s an open, young, queer, free and rebellious New Year’s Eve!”

Several thousand people (including many minors) were reportedly in attendance.

Themed “New Year’s Eve in the Skyscraper” (L’ultimo nel Grattacielo), each of the building’s seven floors featured a dance floor to “suit all tastes: from electro-swing to cumbia, Latin American music and techno by LaRoboterie, a queer group that plays throughout Italy,” La Repubblica, a left-leaning Italian daily that Pope Francis regularly reads, said in a decidedly more favorable article on December 31. It even noted that there would be a “dedicated space” for children to “draw and play” until 12:30 a.m.

LaRoboterie, which co-hosted the rave, describes itself on Facebook in this way:

“LaRoboterie is techno, queer, gay, lesbian and transexual, is feminist, anti-fascist, anti-sexist, is a refugee and a homeless, a gypsy, a bitch and a weirdo, a slut and an addict, is an immigrant and a prisoner, is freak and punk, HIV positive and bizarre, is drag and crooked but most of all is free and proud to be whatever she wants to be. Since 2007 the most underground, alternative and political Italian queer crew. In more than 11 years LaRoboterie has hosted hundreds of events all across Italy and beyond with lots of guests from all around the globe. Music, video art, mapping, performances and an innate attitude to break the borders between genders. No rules, only the will to share the dance floor dancing and sweating to the beats. (…) Wandering through all Italy from south to north, from the coast to the islands and mixing the deepest techno to some electro beats, acid drifts and downtempo, sophisticated rhythms and melancholic melodies. Queer performances where sexuality is a complex world made of everyone tastes, no limits in expressing ourselves, no limits in the freedom of being whatever everyone wants.”

Boasting that it was “the most beautiful New Year’s Eve in Rome,” event photos posted on Spin Time Lab’s Facebook page on January 7, 2020 feature two lesbians kissing on a dance floor and a pamphlet attendees received, which reads: “Before entering we remind you that in our skyscraper every person has to feel received and welcomed. Homo-transphobia, sexism, fascism, machismo and racism are not permitted. Differences are always an enrichment. No means no.”

The occupied building, located at Via Santa Croce in Gerusalemme 55 in Rome, is just five minutes’ walk from the Basilica of the Holy Cross in Jerusalem. Built in 325 to house the relics of the Passion of Jesus Christ brought to Rome from the Holy Land by Empress St. Helena, mother of the Roman Emperor Constantine, the Basilica’s relics include a piece of the True Cross and two thorns that pierced Our Lord’s Sacred Head.

Turning the lights back on to illegality?

In May 2019, the Apostolic Almoner, Cardinal Konrad Krajewski, 56, drew controversy after he climbed down a manhole and broke a seal to reconnect electrical circuit breakers for the building’s over 400 inhabitants (including numerous children). At least 70 percent of those occupying the building are migrants (from 29 countries), while some are Italians who have lost their homes.

Electricity had been cut to the building in early May for failure to pay 300,000 euros in electric bills that had piled up since 2013. That year, “Action” — one of the most active right to housing movements in Rome — seized the disused government building to create housing for squatters, while dedicating other parts of the complex for business activities like Spin Time Labs.

The activities going on at the building’s social center, including for-profit but untaxed rave parties, were already generally known when the papal almoner intervened to restore electricity.

At the time, Cardinal Krajewski, who has been the only Polish prelate to receive the red hat from Francis, said the act was a “desperate and humanitarian gesture to help families struggling to survive.” The cardinal, who has carried out many charitable acts for the poor in Rome, said he was aware of the possible consequences he might face and would pay a fine if necessary but insisted that it was necessary for the sake of the families, and especially children.

La Repubblica hailed Cardinal Krajewski as a modern-day Robin Hood. But then-Minister of the Interior, Matteo Salvini, was more critical, saying: “I will count on the Pope’s almoner, who intervened to turn the power back on in an occupied building in Rome, to pay the 300,000 euros in overdue bills.”

According to Italian media, the electric bills still aren’t being paid.

Meanwhile, the New Year’s Eve party took in 80,000 euro in entrance fees alone, according to Il Messagero. Organizers denied the figure, however, saying proceeds totaled only 33,000 euros. They also denied claims that drug dealers were at the rave, claimed security was more than adequate, and said they look forward to the next Spin Time Labs event.

Asked how it is possible that all seven floors of the building were used for a New Year’s Eve rave, with families and children living in the building, Italian sources told LifeSite that it’s a “complex situation” and often these families have to “suffer through” and “submit to” these events in exchange for rent-free housing.

LifeSite contacted the Holy See Press Office to inquire if the Pope’s almoner is aware of the scandalous New Year’s party that was held in the building where he illicitly reactivated the electricity. We also asked why the Vatican is supporting a group that allows such events to be held, particularly with minors present and families with children in the building.

As of this report, we have not received a reply.