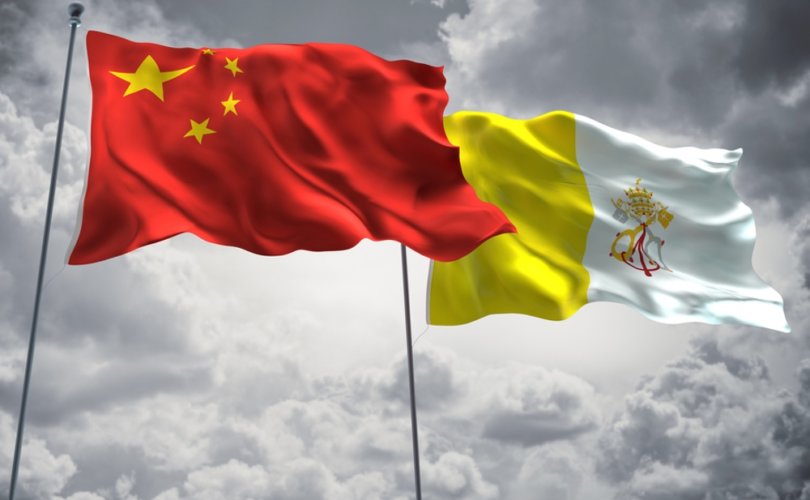 October 30, 2020 (LifeSiteNews) – The Vatican celebrated the extension of the Provisional Agreement on the Appointment of Bishops with the Chinese Communist Party, issuing a press release announcing the extension describing the agreement as “of great ecclesial and pastoral value” and the first two years of its implementation “to have been positive.”

An article published in L'Osservatore Romano that accompanied the press release cited the appointment of two bishops in the past two years and several processes of appointment currently underway and expressed “the hope of progressively achieving other positive goals.”

Nevertheless, the piece also vaguely acknowledged that “there are still many situations causing serious sufferings,” of which the Holy See is aware, and that it “does not fail to draw them to the attention of the Chinese government so that religious freedom might be truly exercised.”

Massimo Introvigne, the editor of Bitter Winter, a Turin-based magazine on religious liberty and human rights in China, wrote in his treatment of the renewal of the China-Vatican deal that the mention of “situations causing serious suffering” is “an allusion to the conscientious objectors who refuse to join the Chinese Catholic Patriotic Association (CPCA).” Bishops and priests are under continuous pressure to sign an agreement in order to be recognized by the state in which “one must declare acceptance, among other things, of the principle of independence, autonomy and self-administration of the Church in China.”

In the Holy See’s June 2019 guidelines for this “civil registration” of clergy, it expressed support for clergy who refused to sign while also giving reasons why signing should not be considered a schismatic act. In recent months, the Chinese government has been increasing its pressure on conscientious objectors to sign.

One conscientious objector recently resigned from his episcopal office on account of the confusing situation. On October 5, Mindong Bishop Guo Xijin, who has been persecuted for refusing to join the schismatic “Patriotic Association,” resigned from public office to lead a life of silent prayer. Guo confessed his incapacity to “keep up with this era” and said he did not want to be an “obstacle to progress.”

“I am a person who has no talent, my head is now a void unable to change with a changing society, a shepherd born in a poor village who has no talent, no virtue, no wisdom, no skills, no knowledge; in the face of this age that changes so rapidly, I feel almost incapable,” Guo said in his short resignation speech.

“I thank God for enlightening me by making me understand that I am no longer able to keep up with this era. Nonetheless, I do not want to become an obstacle to progress. This is why I have decided to resign by submitting my resignation to the Holy See already last month.”

Guo has committed to celebrate Mass only in private and to leave all administrative matters in the charge of Bishop Zhan Silu. In 2018, Pope Francis had lifted the excommunication of the Patriotic Association’s Zhan under the provisions of the Sino-Vatican agreement. Guo was demoted to the rank of auxiliary bishop of the diocese. Asianews.it reported that “there are tensions between priests who swear obedience to Msgr. Zhan Silu and the Communist Party … and those who do not accept submission to the Party” in the Mindong diocese.

Asianews also reported that about 20 priests of the Mindong diocese were under increasing pressure to sign on to the “independent church.” For instance, Fr. Liu Maochun, who is no stranger to imprisonment, was kidnapped by the Religious Affairs Bureau for 17 days in September for “re-education.”

According to Asianews, these pressures “have grown stronger in the run-up to a possible renewal of the Sino-Vatican agreement.”

The news website also noted that another bishop who has refused to join the CPCA, Julius Jia Zhiguo, has been sequestered in a hotel since early August. Bitter Winter says Jia was arrested under the pretext of breaking coronavirus restrictions by allowing hymns to be sung in church.

Jia has been running an orphanage for more than 30 years, and the government has been increasing its pressure on this apostolate during the past year. Bitter Winter reported that the government removed 25 children from the orphanage in June, and the bishop resisted the demand to turn the remaining children over to the state.

The CCP also tried to get Jia to sign an agreement that would allow him to open his churches, which have been closed because of coronavirus restrictions, if he could guarantee that children under 18 would not be permitted in them.

When he was taken away on August 10, Jia reportedly said, “I can’t join the CPCA, I’ll die there.”

Pressure is mounting not only on conscientious objectors but on registered clergy as well. Bitter Winter has also shown that clergy and religious are being forced to participate in indoctrination activities. A priest from Henan told the journal that few refuse to attend these “patriotic” activities in the hope that cooperation will “protect the Church from more suppression.”

The report detailed recent compulsory “pilgrimages” to revolutionary sites and monuments during which priests were told to “integrate their experiences” into their future preaching by Ethnic and Religious Affairs Bureau officials. In a similar vein, Bitter Winter noted that government officials are also pressuring Protestant pastors to incorporate party propaganda in their sermons. A pastor from Fujian Province told the magazine, “The CCP hopes to spread its propaganda with our help and test if we obey the government.”

One priest from Henan told Bitter Winter that the government’s mounting pressure on the Church to “sing praises to the Communist Party” has made it impossible to remain in the Patriotic Association. “After President Xi Jinping took power, he adopted many regulations that strip people of their religious liberties. It’s not easy to cope with this demonic government. That is why I intend to leave the CPCA,” he said.

The Vatican’s explanatory article in L’Osservatore Romano emphasized that all the bishops of China are now in communion with the Pope and that there will be no more illicit ordinations, saying, “This will ensure, little by little, the unity of faith and communion among the Bishops and full service to the Catholic community in China.” The article expressed that the Holy See’s pastoral objective is “to help Chinese Catholics, long divided, to offer signs of reconciliation, collaboration and unity for a renewed and more effective proclamation of the Gospel in China.” It does not, however, offer any evidence that this pastoral objective is being met in the face of much evidence to the contrary.