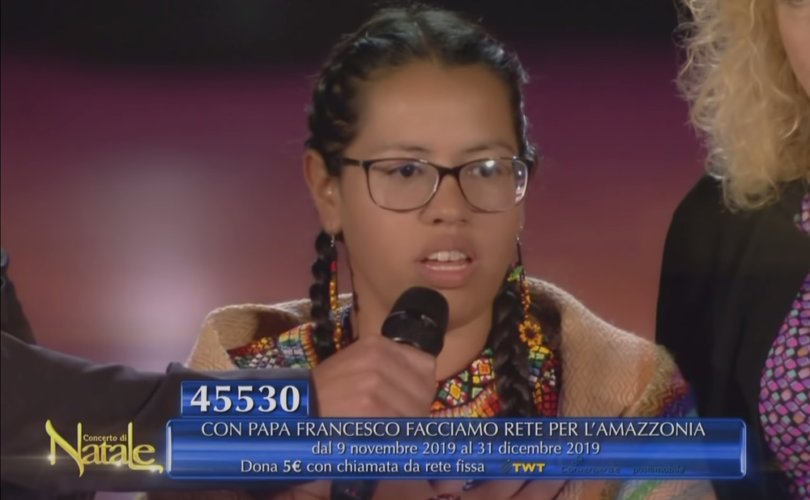 During the Dec. 14 event, whose lineup included Lionel Richie, Bonnie Tyler and Susan Boyle, a priest took to the stage with an indigenous young woman, a translator and the evening’s host, Italian television personality, Federica Panicucci. Watch the event here.

He asked: “What is your relationship with Mother Earth?” to which she responded by inviting the audience to cross their arms over their heart and “feel a strong vibration.” The audience, which included senior Vatican officials such as Cardinal Giuseppe Versaldi, Prefect of the Congregation for Catholic Education, and deputy Secretary of State, or sostituto, Archbishop Edgar Pena Parra, all complied.

“This is the heart – your heart, but also the heart of Mother Earth,” the young indigenous woman continued. “In another place, where you feel silence, there is the spirit, the spirit that allows us to understand the message of the Mother.”

She went on to explain: “For us, the indigenous peoples, above all for my people, Mother Earth, the ‘Hicha Guaia,’ is everything. It is this Mother who provides us with nourishment. She is the one who gives us the sacred water, she is the one who gives us the medicinal plants, and she is the one who reminds us of our origin, the origin of [our] creation. Therefore, we give to her our birth placenta and our first cutting of hair. Our connection with her is constant. That’s how the pulse feels, that’s how the heart feels, it vibrates.”

The priest told the audience that the young lady’s remarks reminded him of the Old Testament passage when God says to Moses: “Do not come near! Remove your sandals from your feet, for the place where you stand is holy ground.”

The verse to which the priest was referring comes from the burning bush passage in the Book of Exodus (3:1-6), which recounts the holiness of God’s self-revelation to Moses, not the sacredness of the earth.

The Fathers of the Church also saw in the burning bush a prefiguring of the perpetual virginity and divine maternity of the Blessed Virgin Mary. “Just as on the mountain the bush burned and was not consumed, so also the Virgin gave birth to the light and was not corrupted,” writes St. Gregory of Nyssa in his treatise ‘On the Birth of Christ.’

The benefit concert was organized by the Congregation for Catholic Education and supported by Don Bosco Missions Valdocco non-profit, a charity to support “the presence, tradition and culture of the indigenous populations” of the Amazon. It was also supported by the Pontifical Foundation Scholas Occurrentes, a network of half a million schools in 190 countries that aims to foster a culture of encounter but without being explicitly Catholic.

Scholas Occurrentes also aims to help students become active in reforestation and following the example of the Amazonian people,” to reconstruct “harmonious relationships with nature and between people” and foster “exchange activities among students and sharing among schools.”

The concert was the latest in a series of Vatican events that have placed the theme of Mother Earth at the center. The Pachamama controversy erupted during the October 2019 Amazon Synod, the final report of which contains several references to Mother Earth. During that month, the Vatican published Pope Francis’ book Our Mother Earth: A Christian Approach to the Environmental Challenge with a foreword by Orthodox Patriarch Bartholomew I. Meanwhile, the Pontifical Academy for Sciences has held a series of conferences in recent years dedicated to protecting the Earth in collaboration with the United Nations.

The UN frequently makes reference to Mother Earth and has also published a course for children on the importance of protecting Mother Earth called “Pachamama.” During the Amazon Synod, the Vatican also hosted a gathering co-organized by the Sustainable Development Solutions Network (SDSN), founded by former United Nations General Secretary Ban Ki-moon in 2012 and directed by pro-abortion globalist and sustainable development guru, Jeffrey Sachs. The UN’s Sustainable Development Goals, which also have a heavy environmental focus, has also become a priority of this pontificate.

The Vatican concert also took place shortly before a Dec. 20 private audience between Pope Francis and UN Secretary General António Guterres in which the environment figured highly in their discussions.

Looking ahead to later this year, the Holy See is also heavily involved in the Global Compact on Education due to take place on May 14, 2020, which Pope Francis said aims to “educate children and young people “in universal solidarity and a new humanism.” International organizations such as the United Nations, various humanitarian institutions, as well as key figures from the world of politics, economics, science, academia and sport have been invited to sign the Pact at St. Peter’s. Scholas Occurentes is a key participant in the event.

“While safeguarding the environment is important for any Catholic, these kinds of events are becoming all too frequent in the Vatican,” an informed source close to the Holy See told LifeSite. “They are becoming such a central focus that they’re even appearing to supplant the Mother of God with Mother Earth.”