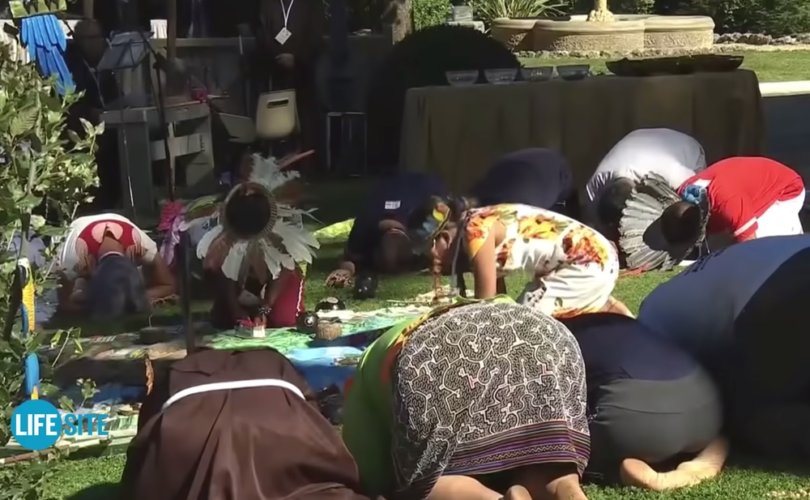 VATICAN CITY, October 25, 2019 (LifeSiteNews) ― A top Vatican media official declared today that there had been no ceremony in the Vatican Gardens in which guests of the Synod of Bishops for the Pan-Amazonian region prostrated themselves.

Despite video footage of the October 4 event that clearly shows men and women in a circle bowing to the ground before various statues — one of which is the controversial “Pachamama” wooden statue — Paolo Ruffini, the prefect of the Holy See’s Dicastery for Communications, denied that the prostrations happened.

Citing a previous question time, Ruffini said, “There were no rituals. No prostration took place. We have repeated this here. We have to be rigorous in saying things that actually happened before cameras. We said that this did not happen.”

But it did happen. The celebration was filmed, and the Twitter feeds of long-distance Synod-watchers are now filling with stills taken from the video. They show several men and women, one man dressed in a brown Franciscan habit, on their knees in a circle around a piece of fabric. They are bowing so profoundly that their faces almost touch the ground.  In the center, a woman in indigenous dress, face paint and headdress is also kneeling. The sheet before her contains at least three human-shaped carvings, two of them of pregnant naked women with red bellies.

Ruffini was responding to a question from L’Espresso journalist Sandro Magister. Magister revealed that contacts in Brazil had informed him that copies of the video showing the celebration were being circulated in Latin American Protestant circles to argue that Catholics practice idolatry. He asked Synod guest Reverend Nicolau Nascimento de Paiva, a Lutheran pastor and co-ordinator of an ecumenical council of churches, what he thought of the confusion.

Ruffini spoke up to reprove Magister before Nascimento could respond.  When the Vatican Communications chief finished speaking, the Deputy Director of the Sala Stampa, Cristina Murray, began to applaud, as did a number of members of the press.

Speaking for the Lutherans of Brazil, Nascimento said that they had a great respect for other peoples’ faith. He acknowledged that in the past there had been clashes between confessions in his city of Belém because of a Catholic devotion to Our Lady of Nazareth of Exile. He did not, however, mention the October 4 event in the Vatican Gardens.