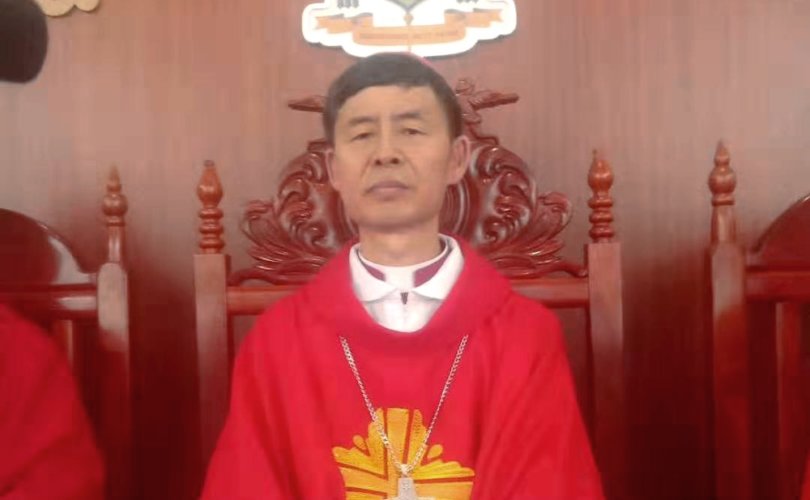 A Vatican spokesman is calling the ordination the “first to take place in the framework of the Provisional Agreement between the Holy See and the People's Republic of China” signed last September.

The Vatican-China agreement, the content of which has yet to be made public, is thought by many Vatican observers to allow Chinese communist authorities to handpick bishops who will then be approved by the Pope, contrary to Catholic teaching. Some say, however, that the priest was named bishop years ago, thus precluding this ordination from being a test for the success of the agreement.

Fr. Antonio Yao Shun, 54, received the episcopal consecration in Jining Cathedral. Matteo Bruni, the Director of the Vatican Press Office, has confirmed that Yao received the “papal mandate” to be ordained.

“I can confirm that H.E. Mgr. Antonio Yao Shun, who has been consecrated Bishop of Jining/Wulanchabu, Inner Mongolia (China), received the Papal Mandate, as was also stated by the Ordaining Bishop during the ceremony yesterday, 26th August 2019,” he told LifeSiteNews and other media organizations.

Bruni continued: “The Episcopal Ordination of H.E. Mgr. Antonio Yao is the first to take place in the framework of the Provisional Agreement between the Holy See and the People's Republic of China signed in Beijing on 22nd September 2018.”

Since the “Provisional Agreement” has not been made public, it is unclear what role it may have played in Yao’s episcopal consecration. However, Asia News reported that some Chinese bishops and laypeople believe that Pope Francis appointed him “long before” the accord.

UCA News reported in 2017 a rumor that the Holy See had appointed Yao, the official vicar general of the diocese, Liu’s successor in 2010.

“If these reports are true, then it would not be correct to say that this is the first ordination since the Sino-Vatican Agreement was signed, since Msgr. Yao was already a bishop,” said China expert Steve Mosher, president of Population Research Institute, to LifeSiteNews.

“Rather it would simply signify that Beijing has accepted as a ‘Patriotic’ bishop, a bishop previously named by the Pope. This would, of course, be a positive development in and of itself, but it should not be taken to mean that the agreement itself was working as far as the joint appointment of bishops is concerned. This requires Beijing to nominate, and the Pope to approve, future bishops,” he added.

Mosher explained that one rumor is that Bishop Yao was “named in pectore by Pope Francis, or even by Pope Benedict years ago, and kept it secret from the Communist authorities, who apparently found him cooperative enough to accept as a ‘Patriotic bishop’ in a public ceremony.”

“The best possible situation is that there are a half dozen or more Bisho Yao's–legitimate bishops–that Beijing is willing to accept,  On the other hand, he may be unique,” he said.

The Catholic Church teaches in its 1965 decree on bishops that “the right of nominating and appointing bishops belongs properly, peculiarly, and per se exclusively to the competent ecclesiastical authority.”

“Therefore, for the purpose of duly protecting the freedom of the Church and of promoting more conveniently and efficiently the welfare of the faithful, this holy council desires that in future no more rights or privileges of election, nomination, presentation, or designation for the office of bishop be granted to civil authorities,” states the decree Christus Dominus, highlighting the Church’s sacred right to name bishops because of the crucial spiritual role these men of God fulfill.

Official Vatican media has released a statement regarding the choice of Yao as bishop.

According to Vatican News, one of the official media organizations of the Holy See: “In a unanimous decision [Yao] was named bishop of the diocese of Jining [this past] April by the representatives of the diocese in a meeting led by Bishop Meng Qinglu. Among the representatives, the predominant component was made up of priests flanked by some lay and religious representatives. After careful evaluation, Yao Shun received the apostolic mandate and nomination by the Pope.”

David Mulroney, a former Canadian ambassador to China, told LifeSiteNews that a return to ordaining bishops in China is “welcome,” but expressed concern about “lack of transparency” regarding the Vatican-China deal.

“Moving forward with episcopal appointments in China is most welcome, and is why the Vatican sought some form of agreement with the Chinese state,” he said via email.

However, the career diplomat said that the appointment also underlined a “lingering problem.”

“The lack of transparency around the Sino-Vatican accord, which was concluded almost a year ago, has created a climate of doubt and suspicion,” Mulroney observed.

“This has been exacerbated by growing evidence of the Communist Party’s hostility to any form of religious belief that has not been ‘sinicised,’ which means being so constrained and denatured as to become anodyne, just another box on the Party’s organization chart.”

Mulroney speaks Mandarin, and over a decade before his 2009 – 2012 stint as Canadian Ambassador to the People’s Republic of China, he served three years as the Executive Director of the Canada-China Business Council. He believes that Chinese Catholics need a Church that is courageously loyal to Rome.

“The Chinese faithful know the Communist Party far better than the Vatican does,” he told LifeSiteNews.

“They long for a Church characterized by courageous fidelity to Rome, not compromise with Beijing. Unless and until they are given evidence of this, Chinese Catholics will continue to struggle with doubt and suspicion.”

Apparently, over 120 priests concelebrated the Mass.

Asia News established that Yao was born in Ulanqab, Inner Mongolia in 1965. He was ordained to the priesthood in 1991 after graduating from the Chinese Communists’ “National Seminary of Catholic Church in China.”  The Benedictine Order has confirmed that he graduated from St. John’s University, Collegeville, Minnesota in the USA in 1996 with a degree in liturgy. It is also believed that Yao pursued biblical studies in Jerusalem.

According to Asia News, Yao taught in National Seminary in the 1990s and served as both a spiritual director and a member of the liturgical commission dependent upon the  Patriotic Association and the Council of (Communist-approved) Chinese Bishops.

He is replacing the Vatican-approved Bishop John Liu Shigong, who died in 2017.

Asia News says that the Diocese of Jining, which is in Ulanqab, has approximately 70 thousand Catholic laypeople who are served by 30 priests and 12 nuns. It is unclear from the report if these are members of the Chinese Catholic Patriotic Association, which is under the control of the Communist Party of China, or of the Underground Catholic Church, which has been unswervingly loyal to the Holy See, or both.

Cardinal Joseph Zen, 87, the former Bishop of Hong Kong, is one of the Vatican-China agreement’s most high profile critics. Last November, Zen said priests of the underground Church have “cried” to him since the deal was inked. In late 2018, he went to Rome to deliver a letter to Pope Francis, asking him to pay closer attention to the crisis within the underground Catholic Church in China.

Zen stated, “They said officials have forced them to become open, to join the [schismatic] Chinese Catholic Patriotic Association and to obtain a priest’s certificate with the reason that the pope has signed the Sino-Vatican provisional agreement.” In a strongly worded opinion piece for the New York Times, Cardinal Zen suggested that the pope’s deal with China “invited the annihilation of the real Church in China.”