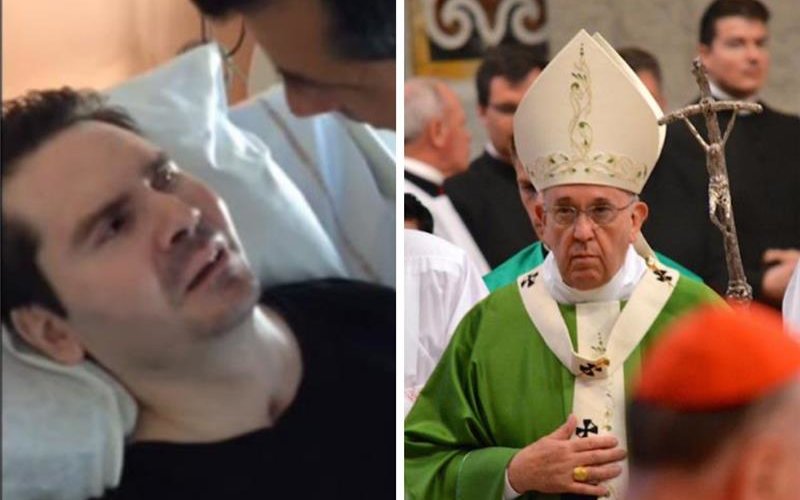 July 19, 2019 (LifeSiteNews) – Vatican News, the Vatican’s official news site with daily global and regional updates in 32 languages, confirmed that Pope Francis did call Viviane Lambert, mother of brain-damaged Vincent — who died in Reims, France, last week after having been deliberately deprived of water and food for nine days — with words of support.

It merely stated that Alessandro Gisotti – in what was one of his last interventions as interim head of the Holy See Press Office – was called upon by Vatican News to confirm the existence of the phone call, and did so.

In our Thursday article, we quoted Viviane Lambert’s words to LifeSite:

“V.L.: Yes, I got a call from the Pope. It was Cardinal (Philippe) Barbarin who told me: I hadn’t realized. Cardinal Barbarin called me several times, as a good father, very paternal, and he said to me: ‘I saw the Pope, I told him: “We must call Mrs. Lambert.’” He told me that I had to look at my recent messages – I hadn’t seen them all, there were so many – and there was indeed a message in Italian that was translated into French for me. A touching, very personal message.”

Vatican News added a few of its own comments, recalling that Vincent Lambert’s parents have been protesting against the decision to stop administration of food and fluids to their 42-year-old son who was in a minimally conscious state since 2008 after a car accident that left him deeply handicapped, calling it “euthanasia in disguise.”

“They were supported by Pope Francis, who, since the beginning of his pontificate, has never ceased to work for the protection of life, from its conception to its natural end, in full continuity with the magisterium of his predecessors. In the case of Vincent Lambert, he had intervened several times, sometimes calling him by name, which is rather unusual regarding the Pope’s public statements,” wrote Vatican News, which recalled several of Pope Francis’ tweets and declarations on the respect due to human life.

It should, however, be said in France, only 10 of 120 bishops ever spoke out in support of the life of Vincent Lambert, and none at all during the first end-of-life procedure that Vincent survived for 31 days in 2013, when his parents obtained a first judicial decision saving his life.

Nor did the French bishops as a whole – with a few notable individual exceptions over the years – protest against the two end-of-life laws authored by French member of Parliament Jean Leonetti in 2004 and 2016, which explicitly promote the killing of deeply handicapped patients by refusal of ordinary care – nutrition, and in the second law, hydration.

On the contrary, Leonetti’s laws have been touted as deeply consensual and only too often, even supporters of Lambert’s life have insisted that it is a “good law” that had been incorrectly applied to his case.

This is simply not true, and Jean Leonetti has confirmed it. In its first version, in 2005, the law had been tailored to fit situations like that of Vincent Humbert, who was left blind, dumb and tetraplegic by an accident and was at the center of a pro-euthanasia campaign led by his mother and a local doctor who said they were begging in his name for a way for his life to be ended even though he was not suffering from any disease. Finally, after a failed poisoning attempt by his mother, Humbert received a shot of potassium chloride from Dr Frédéric Chaussoy. He died on September 26, 2003.

A public lawsuit against Marie Humbert and Chaussoy later ended with a dismissal order, when the investigating judge decided that they had acted “under coercion.”

It was after this case that Leonetti was called upon by French President Jacques Chirac to write a law that would allow patients to have a “right to being left to die.”

No statistics are available on the use of this law on non-terminally ill patients, but one case, that of Hervé Pierra who survived a suicide attempt by strangulation and was left in a so-called “vegetative state” with severe respiratory complications, made national headlines in 2006. His agony lasted for six days, marked by spectacular convulsions. He burned with fever and his skin was cyanotic but received no sedation or painkillers.

Leonetti protested against the situation. It was partly the “Hervé Pierra affair” that would lead to a new end-of-life law signed Leonetti-Claeys in 2016. But Lambert’s ordeal was also instrumentalized, after an administrative court decided in 2013 that withholding food and fluids from the man whose desire to die was unclear and was not at the end of his life was an unwarranted attack on his right to life.

Thus, the new 2016 Leonetti law implemented new conditions under which a patient’s will could be sought. It promoted living wills. It explicitly called food and hydration delivered by a gastric tube a “medical treatment,” thus taking it out of the category of ordinary care that is always due. It obliged doctors using its dispositions to withhold food and fluids also to administer “deep sedation until death” – this, by the way, was not done for Lambert. It created a right for patients capable of expressing their will to refuse food and fluids and to receive deep sedation. Finally, it created an obligation for doctors to use this end-of-life protocol for patients incapable of expressing their will when in their opinion “unreasonable obstinacy” was being applied in keeping certain patients alive.

This law is in itself one of the major obstacles to medical practice that would fully respect the commandment of natural law: “Thou shalt not kill.”

But even within its dispositions, its application to Lambert poses serious legal questions, not least because a team of medical experts named by the administrative court of Châlons-en-Champagne before the last end-of-life procedure was given the green light explicitly declared that administering food and fluids to the young man did not qualify as “unreasonable obstinacy.” This finding was brushed aside the judges and later by Dr Sanchez, who pulled Lambert’s feeding tube.

Days before Lambert died, on July 5, Jean Paillot and Jérôme Triomphe — legal counsels of Lambert’s parents, Pierre and Viviane, who fought for his life for six long years — filed a complaint for “attempted murder on a vulnerable person.” Being the denunciation of a crime that had not yet been committed, the local public prosecutor could in law at that point take all measures necessary for its prevention. Nothing was done.

It did lead to a hearing of Vincent Sanchez by the public prosecutor on July 6. It also caused procurator Matthieu Bourrette to order an autopsy on Lambert’s body the day after his death in order to establish the cause of death, despite Paillot’s and Triomphe’s supplications that this added distress not be added to Viviane and Pierre’s grief. They argued that the cause of death was very clear.

It is possible that the objective of the autopsy was to demonstrate that Lambert had not died from the effect of excessive sedation that could be assimilated to euthanasia, which is illegal in France. Witnesses from both sides have spoken of his discomfort, at least during the first four or five days of the end-of-life process: he moaned, groaned, cried, suffocated and breathed with repeated “rattles.”

Triomphe stated on a radio show on Radio Courtoisie in Paris (in which LifeSite was represented) that since Lambert was being killed anyway, those who loved him would have preferred all measures to be taken to avoid suffering as much as possible. “We would have preferred Sanchez to push on the syringe to give him Hypnovel” (Versed), he said, adding that the Leonetti law’s provisions had not been taken into account and that this constitutes one reason more to sue that doctor.

For the moment, legal action for “failure to assist a person in danger” is underway and a public hearing will take place on November 26 in Reims.

A separate lawsuit is aiming to have Sanchez’s license to practice medicine cancelled.

Triomphe explained how during the whole legal process, various courts and tribunals consistently barred all efforts to have Vincent’s real situation to be taken into account. In particular, most judges refused to watch videos showing his reactions and his successful attempts at swallowing small quantities of cream and fruit purées fed to him by spoonfuls by his mother. A notable exception was the Court of Appeal of Paris on May 20, where all three judges watched the images of Vincent crying the evening before, just after he had heard that his feeding tube would be pulled. Those judges decided that he had a right to live …

Over the years, no less than nine judicial demands to have Lambert transferred from Reims hospital, where he was kept under lock and key in the geriatry department for six years, were rejected, as well as attempts to have his wife Rachel’s guardianship overturned.

Further action will take place. The United Nations Committee for the Rights of Disabled Persons (CRDP) has been called upon and, seeing that its demands for provisional measures protecting the life of Lambert were disregarded by France, a condemnation is more than probable.

As the international Convention on the rights of disabled persons expressly prohibits the withholding of food and fluids from the handicapped, this could also lead to interesting developments.

“The time of reckoning has come,” Triomphe concluded.