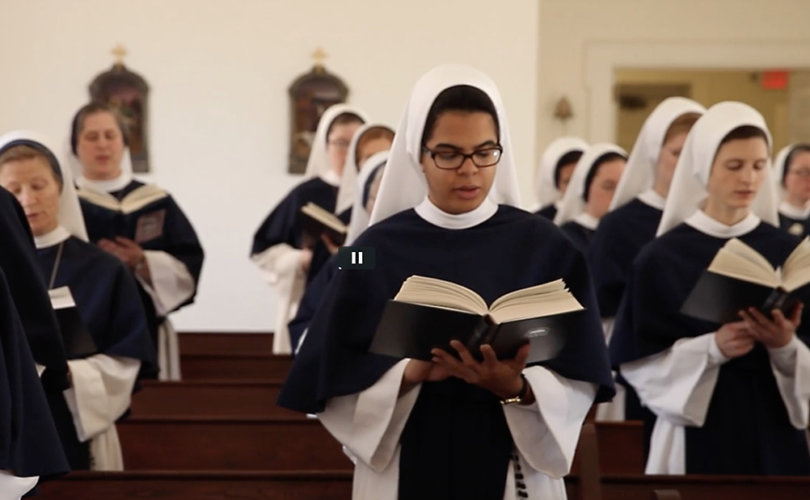 VATICAN CITY, July 11, 2018 (LifeSiteNews) — Women seeking to join the Order of Consecrated Virgins will no longer have to be virgins, according to the new guidelines for the vocation.

The new Instruction for the Order of Virgins, “Ecclesiae Sponsae Imago” (“Image of  the Bride-Church”), released July 4 by the Congregation for Institutes of Consecrated Life and Societies of Apostolic Life, says the call to perpetual chastity as a consecrated woman living in the world cannot be reduced to “the symbol of physical integrity.”

Therefore, the instruction continues, “ … to have kept her body in perfect continence or to have practiced the virtue of chastity in an exemplary way, while of great importance with regard to the discernment, are not essential prerequisites in the absence of which consecration is not possible” (ESI, 88).

Nevertheless, no woman who has ever been married is permitted to join the order.

Canon lawyer Ed Peters pointed out a paradox. “Now, according to the plain terms of ESI, the Blessed Virgin Mary, archetype of virginity consecrated to God, would not be eligible for admission to the order of virgins, but Mary Magdalene, model for women who, Deo gratias, set aside a promiscuous life, would be eligible.”

“Something, I suggest, is seriously wrong with such norms.”

In examining the guidelines’ exclusion of any married woman, including married virgins, Peters stated that “using a woman’s marital status as a circumlocution for whether she is a virgin obscures what is being consecrated.”

That is, her virginity.

Peters also pointed out that both the 1970 Rite that re-established the ancient order and ESI forbids women who have “violated chastity” in some notable way, confusing the virtue of chastity with the fact of virginity.

“Simply put, women can violate chastity in many ways, but in only one way do they lose their virginity,” Peters wrote.

He observed, however, that ESI 93 clarifies that by “unchastity” it means that a woman has “never lived in public or open violation of chastity, that is, in a stable situation of cohabitation or in similar situations that would have been publicly known.”

In Peters’ opinion, this covers the majority of cases in which women have carried out unchaste acts “yet not acts destructive of their virginity” and may still be considered for admission to the Order of Consecrated Virgins.

‘Without virginity, there’s no vocation to the Order of Virgins’

But then there’s the problem that ESI has introduced: the novelty of non-virgins being allowed to join an order of virgins.

“Without virginity, there’s no vocation to the Order of Virgins anymore,” Therese Ivers told LifeSiteNews.

Ivers is a American canon lawyer recognized by the Vatican as an expert in consecrated life as well as a member of the OCV.

She believes that without virginity being a prerequisite for admission to her order, there is “no resemblance” and “no continuity” to the Order as it was in the past and has been since 1970.

“Whatever the dicastery is conceiving of as the Order of Virgins now, it is not the entity existing prior to the Instruction,” she continued.

The canon lawyer pointed out that the document also confuses the expressions “virginity,” “physical integrity” and “perfect continence”:

“First, the straw man of ‘physical integrity’ (basically, an intact hymen) is cited as if that were proof of a woman’s virginity (which it obviously is not … ),” Peters stated. “But then, having rightly warned the reader not to focus on ‘physical integrity’ as if that were virginity, ESI immediately substitutes “perfect continence” — another unfamiliar term but one describing a situation that, if verified, would satisfy as proof of virginity! — and rejects it as being necessary for admission to the order of virgins.”

In other words, the quasi-mythical physical “sign” of the intact hymen (which can be lost without conscious choice) was rejected as a prerequisite, but so was the very real moral sign of virginity: never having consented to genital intercourse.

Peters said he knew of no other church document that denied that virginity was required for one’s consecration as a virgin. Hitherto, this has always been a requirement for the Order of Consecration of Virgins.

‘Virginity is lost only when there is willed genital activity’

Ivers told LifeSiteNews that there is a lot of confusion about what virginity really is.

“For Catholics, virginity is not defined as the ‘physical integrity’ of the (hymen),” she said. “Virginity is lost only when there is willed genital activity.”

Whether this willed genital activity is done alone or with another, then “virginity is irreparably lost.”

Ivers explained that “spiritual virginity” is also often misunderstood. Spiritual virginity is not the mere intention to live chastely or remain a virgin until marriage but “what happens when one intends to give one’s virginity to the Lord for the sake of the Kingdom.” This determination to remain a virgin for Christ — not for any other reason — is also known as the “virtue of virginity” when it is combined with the absence of the experience of genital activity.

Consecrated virginity is the mystical marriage of the virgin to Christ, involving an indissoluble bond.

A source within the OCV who spoke only under condition of anonymity told LifeSiteNews that the Congregation for the Doctrine of the Faith might not uphold the Instruction.

“I’m not sure the CDF saw it,” the source said. “There’s an interesting little paragraph that says that in cases of grave necessity the Rite can be delegated. The CDF forbade delegation to non-bishops when the Rite was promulgated in 1970.”

This is because the bishop represents Christ in the consecration of the virgin as the Bride of Christ and always has.

“I know hundreds of consecrated virgins who weren’t consulted, but I also know the two who work in the Vatican who were presumably consulted and don’t believe virginity is possible,” the source said. “One wrote in Sequela Christi (a Vatican publication) that a one-night stand is acceptable (in the past of a candidate) as long as it’s not publicly known.”

“That’s why we knew and feared the Italians would have the only significant input.”

The source described the new guidelines as an attack on her order, on marriage, and on the Church itself. She was particularly anguished by a passage stating that a consecrated virgin can be dispensed from her obligations, which means that human marriage and sex remains on the table.

“Consecrated virgins are living embodiments of the Church,” she said. “To be a consecrated virgin means to be a bride of Christ. This is the only vocation that claims to have an indissoluble nuptial bond with Christ. Now we are saying that Christ can have a divorce.”