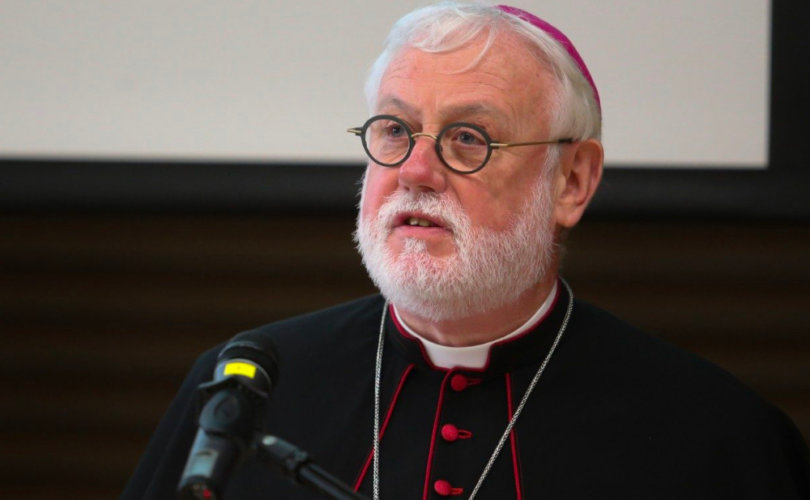 (LifeSiteNews) — A high ranking Vatican diplomat has described the Holy See’s relationship with the Biden administration as “very positive” and “easier” than it was with “the previous [Trump] administration.”

Archbishop Paul Gallagher, the Vatican’s Secretary for Relations with States, was interviewed by the Jesuit-run America magazine and described the “exchanges with the Biden administration” as “frequent, particularly through the U.S. embassy to the Holy See.”

Furthermore, while the Vatican representatives will not always agree with the U.S. on certain matters, Gallagher said “it is a very positive relationship” since neither side has any hesitation to approach the other, which is “not always the case in bilateral relations.”

“So compared with the previous administration, it’s easier now,” the British archbishop said.

“Frankly speaking, I think we found that we didn’t see quite as eye to eye with the previous administration as we do with this one,” he continued.

And though the Holy See’s Secretariate of State does confess difficulties with the Biden administration, “at the same time, there are other issues on which we can work very well. Most of the positions, I would say, are issues on which both sides recognize the importance and sometimes the sensitivity of the issues.”

Asked to provide examples of differing views between the Holy See and the Biden administration, the archbishop mentioned “migration,” lamenting “how sometimes people who have been in the United States for many, many years are eventually deported.”

— Article continues below Petition —
CANCELED: Stand with Fr. JesusMary after he was BARRED from Priestly Ministry for Criticizing Pope Francis!
Show Petition Text
9912 have signed the petition.
Let's get to 10000!
Thank you for signing this petition!
Add your signature:
Show Petition Text

Yet, CNN reported in the spring of last year that the Biden administration significantly reduced its deportation policy of individuals illegally present in the United States, enforcing the law only against “those who may pose a threat or have criminal backgrounds.” Republicans identified this as a 26-year low of such measures, “despite record-high border crossings.”

Gallagher also celebrated the Vatican’s recent joining of the 2015 Paris Climate Agreement, known for its underlying abortion and population control agenda and naturally has the strong support of the Biden administration as well.

This further means “that the position of the Holy See, which is expressed above all in ‘Laudato Si,’ will be much more coherent.”

As LifeSiteNews has previously reported, however, it has long been noted by pro-life advocates that the 2015 Agreement includes an underlying agenda to push abortion, contraception, and sterilization as necessary means of controlling the population and minimizing human consumption and use of the earth’s resources. The way such things are imposed on poorer countries is by linking them to desired international funds and resources.

In the text of the Agreement, such issues are cloaked in phrases such as “gender equality” and “empowerment of women,” and are joined to the presumed need to address climate change in a “toss in everything” approach. The Agreement states:

Pro-life advocacy group Voice of the Family pointed out in 2015, when the Climate Agreement was first drafted, that the U.N.’s “Sustainable Developments Goals use ‘gender equality’ and ’empowerment of women’ to advance abortion and contraception.”

In the summer of 2017, President Donald Trump announced that the United States would “cease all implementation of the non-binding Paris accord,” and on November 4, 2020, just after election day, he officially removed the U.S. from the Agreement.

In contrast to the pro-abortion goals of the Paris Agreement, Trump is widely seen as instrumental in the recent decision of the U.S. Supreme Court to overturn Roe v. Wade, which delivered the pro-life cause its most transformative victory since 1973 when Roe inflicted abortion-on-demand upon the entire nation.

During his time in office, the 45th president appointed three justices who decisively tipped the ideological scales of the court in favor of conservatism: Neil Gorsuch, Brett Kavanaugh, and Amy Coney Barrett.

Though professing to be Catholic, Biden responded to the decision by promising to “do everything in my power” to enshrine the legality of killing preborn girls and boys into federal law.

The Catechism of the Catholic Church affirms abortion to be always “gravely contrary to the moral law” and an “abominable crime.” Furthermore, in its 2019 Faithful Citizenship letter, the U.S. Conference of Catholic Bishops ranked opposition to legal abortion as the “preeminent priority” for Catholics involved in public life.

And finally, in his major work on the sanctity of human life, Evangelium Vitae, St. John Paul II affirmed, “Nothing and no one can in any way permit the killing of an innocent human being, whether a fetus or an embryo, an infant or an adult,” and civil leaders “have a duty to make courageous choices in support of life, especially through legislative measures.” The saint maintained that this responsibility can never be renounced, for which they will “answer to God.”

Don’t be fooled by claims of ‘consensus’ on climate change, science is not a popularity contest

Trump: ‘We’re getting out’ of ‘very unfair’ Paris Climate Agreement