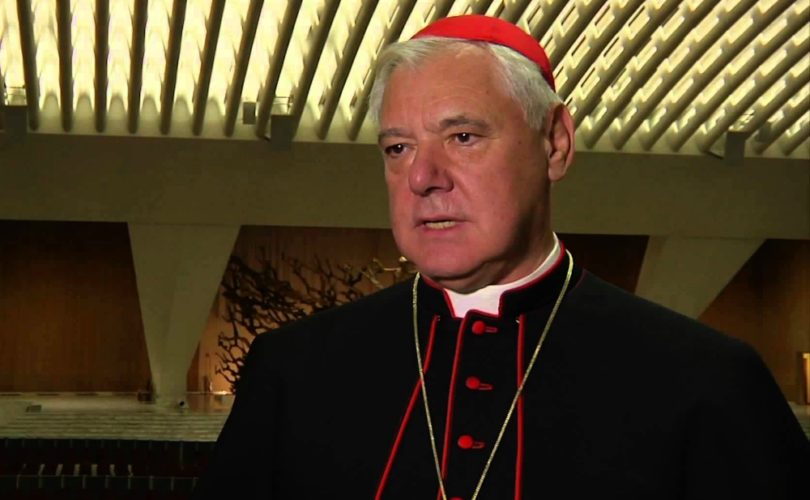 ROME, January 9, 2017 (LifeSiteNews) – The head of the Vatican congregation that defends the Catholic Church’s teaching has publicly criticized the four Cardinals asking Pope Francis to clarify whether his recent exhortation on the family conforms to Catholic teaching.

Cardinal Gerhard Müller, prefect of the Congregation for the Doctrine of the Faith (CDF), says a formal correction of the document is “impossible.”

Cardinal Müller told Italian TV-channel TGCOM24 January 8 that the pope has not put the faith and Catholic teaching in danger and is therefore in no need of a “fraternal correction.”

“The Pope is basically forced to answer with ‘yes or no’. I don’t like that,” he said.

Amid recent news that Pope Francis ordered Cardinal Müller, against the cardinal's objections, to dismiss three priests from his office, some speculate that the Pope could be planning a thorough overhaul of the Congregation similar to the one he recently carried out at the Congregation for Divine Worship headed by Cardinal Robert Sarah. Some are asking whether Cardinal Müller may in fact be trying to avoid the kind of “silencing” that Cardinal Sarah has faced.

Pope Francis’ exhortation Amoris Laetitia has caused widespread confusion in the Catholic Church since its release in April, largely due to its ambiguity on important moral questions involving the indissolubility of marriage, the proper disposition to receive Holy Communion, and the role of conscience. The ambiguity has already caused various bishops as well as bishops’ conferences to implement practices that are at odds with perennial Catholic teaching, such as the bishops of Buenos Aires and Bishop Robert McElroy of San Diego allowing civilly divorced and remarried Catholics who are living in adultery to receive Holy Communion in certain cases.

In September Cardinals Raymond Burke, along with Cardinals Walter Brandmüller, Carlo Caffarra, and Joachim Meisner, submitted the dubia, five yes-or-no questions seeking clarity from Pope Francis on whether the exhortation conforms to Catholic moral teaching. The cardinals went public with their questions in November after the pope did not respond. Cardinal Burke has suggested they could issue a “formal correction” of the exhortation in the coming months, though according to Cardinal Brandmüller, it may be done privately.

Cardinal Burke explained the possible correction in an interview with LifeSiteNews last month.

“It would be direct, even as the dubia are, only in this case there would no longer be raising questions, but confronting the confusing statements in Amoris Laetitia with what has been the Church’s constant teaching and practice, and thereby correcting Amoris Laetitia,” he said.

But despite evidence to the contrary, Cardinal Müller dismissed the notion of a formal correction as unfitting and even impossible since he believes the exhortation poses “no danger for the faith.” He maintained that it is discussing such matters of faith in public that “harms the Church.”

Müller suggested that the Church’s perennial teaching on marriage and family has not changed with the Exhortation, only that the pope is now urging pastors to provide discernment to Catholics who have been divorced and civilly remarried. Such a process of discernment might eventually lead to a determination that access to the sacraments is possible, he added.

“[Pope Francis asks priests] to discern the situation of these persons living in an irregular union — that is, not in accordance with the doctrine of the church on marriage — and asks for help for these people to find a path for a new integration into the church according to the condition of the sacraments (and) the Christian message on matrimony,” he said.

Müller said that he saw no clear discrepancy between what the Church has always taught and the mission of the Church as put forward by the exhortation to care for people in difficult situations.

In December Cardinal Müller indicated that the CDF would remain neutral regarding the dubia, stating at that time the congregation cannot “participate in the controversial dispute” while adding that “it does not stand in the power of the Magisterium to correct God’s Revelation or to make the imitation of Christ comfortable.”