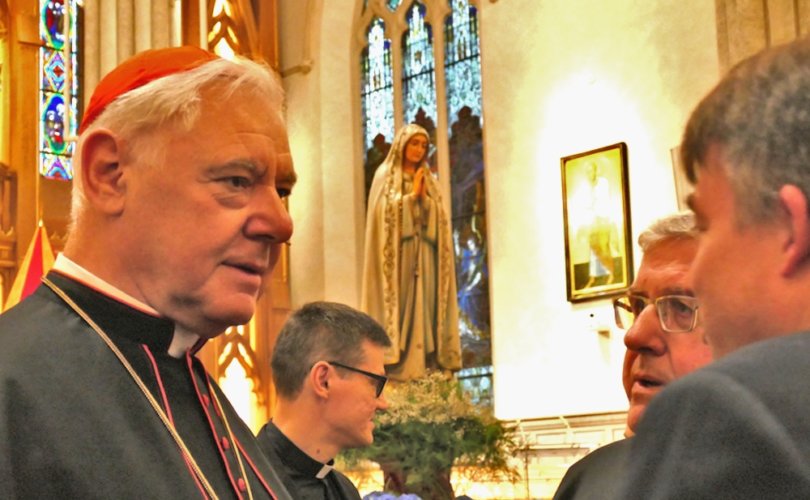 TORONTO, Ontario, May 17, 2017 (LifeSiteNews) — The Vatican’s top doctrinal chief told Canadians this week that it’s “essential” they work to reverse the legalization of euthanasia in their country.

Cardinal Gerhard Müller said that not only is euthanasia “gravely wrong” in itself, but it also “creates toxic and deadly social pathologies that disproportionately afflict the weakest members of  society.”

Müller was the keynote speaker for a conscience rights' conference sponsored by the Toronto-based Canadian Catholic Bioethics Institute and spoke at St. Michael’s Cathedral Monday.

The German head of the Vatican’s Congregation for the Doctrine of the Faith (CDF) lamented Canada’s “tragic recent” legalization of euthanasia as encouraging “grave violations of man’s intrinsic, inalienable, and equal dignity.”

The Supreme Court struck down the law banning euthanasia in February 2015. In June 2016, Justin Trudeau’s Liberal government codified that decision in Bill C-14.

Müller criticized Canadian “public discourse” surrounding the issue of euthanasia in which he said the “facilitation of suicide or even direct killing is deceptively termed ‘aid in dying.’”

That’s “a fabricated expression whose only rhetorical function is to conceal the very nature of the death-dealing action it describes,” he said.

“In matters of justice and morals, it is essential that we call things by their right names,” he said, adding that euthanasia is the “direct killing of one person by another for the sake of some perceived medical or social benefit.”

It is distinct from the “refusal or discontinuation of life-sustaining measures,” the purpose of which “need not be to cause or hasten death,” he said.

Müller said that euthanasia is also distinct from the “aggressive use of pain treatment through medication and dosages that are dangerous for the patient,” in which the “aim is to alleviate suffering through potentially risky means, not to kill the patient.”

The CDF’s 1980 declaration on euthanasia states: “[N]o one can make an attempt on the life of an innocent person without opposing God's love for that person, without violating a fundamental right, and therefore without committing a crime of the utmost gravity.”

Müller said that euthanasia advocates justify the act for two reasons: “respect for autonomy and compassion for the suffering.”

“Both rationales are internally incoherent and fatally flawed,” he said.

Human beings “do not exist as atomized units,” and the premise that someone contemplating suicide or euthanasia is able “to exercise autonomy in a full sense” is “illusory,” he added.

The Cardinal pointed out that if “autonomy” is the primary basis for allowing assisted suicide or euthanasia, then it follows that “there can be no internally coherent limits on its practice.”

“If a person simply wishes to die because he is tired of life, the principle of autonomy provides no grounds for refusal. Thus, meaningful legal limits quickly give way,” he said.

He noted how Belgium and the Netherlands have already experienced a “rapid weakening of the regulatory strictures on euthanasia.”

As for euthanasia being compassionate, in practice it inevitably becomes  “the path of least resistance” and leads to a decrease in accessible pain management for the sick, thus resulting in greater suffering for all, he said.

He warned that a misguided sense of compassion “opens the door to eugenic judgments about quality of life,” leading to “involuntary euthanasia.”

Müller gave an example from the Netherlands where “a doctor surreptitiously euthanized a nun over her objections.” The doctor justified killing the nun, he said, because “she was mistaken about her best interests due to an irrational and superstitious commitment to religious belief.”

He also noted how the Netherlands infamously implemented in 2008 the “Groningen Protocol for the killing of newborns in the name of compassion.”

Prudential case is “most potent” argument in pluralistic society

Müller said that in a “pluralistic society” the best argument against euthanasia is one “framed at the level of public policy.”

While not everyone accepts that euthanasia is wrong in principle, “all persons of good will should be able to see the profound and inevitable social harms that fall disproportionately on the weak and vulnerable when euthanasia is legalized.”

To illustrate his argument, the Cardinal related that in the 1990s, an advisory committee looked into legalizing assisted suicide and euthanasia in New York at the request of then-governor, liberal and Democrat Mario Cuomo.

But contrary to their expectations, the self-described “secular and liberal” committee members ultimately advised against legalizing euthanasia. After their investigations, they concluded that to do so would “inexorably” lead to:

grave and lethal new forms of fraud, abuse, coercion and discrimination against the disabled, poor, elderly, and minorities; deadly forms of coercion by insurers and faithless family members; corrosion of the doctor-patient relationship; an eventual shift to non-voluntary and involuntary euthanasia; and widespread neglect of treatment for mental illness and pain management.

The committee discovered that at that time in the Netherlands, “for every three or four instances of voluntary euthanasia, there is one case of killing without consent.”

On an American scale, that would work out to 36,000 people euthanized each year and an additional 16,000 killed without consent, a “risk” the committee regarded as “unacceptable.”

Conscience rights must be protected

“Given the gravity of the threat posed by legal euthanasia, it is essential that we work for its reversal in the law,” Müller stressed.

“In the meantime, “we must take immediate measures to protect the rights of health care providers who refuse to collaborate in or facilitate access to euthanasia.”

This is “not simply a Catholic issue,” he said.

The Cardinal said that compelling a doctor to “participate in the annihilation of the patient that he has promised to care for” is “a grave act of violence and direct corruption of the very logic of the art of medicine.”

“It is, in short, to coerce the doctor to act against the good of the patient, which the doctor has sworn an oath never to do,” he said.

Any law is unjust “that forces a physician to act against what he knows to be the most basic good of the patient – the preservation of his very life, either directly or indirectly,” he added.

The College of Physicians and Surgeons of Ontario (CPSO) has mandated that doctors give patients requesting euthanasia an effective referral to an accessible and willing colleague.

A group of doctors and healthcare associations has taken the CPSO to court, arguing that the policy violates their Charter rights of freedom of religion and conscience. The case will be heard in Toronto in June.

Müller concluded by urging Catholics to not be discouraged despite “currents in the culture and in the law” that undermine respect for human life, especially those of the most vulnerable.

“[W]e should take heart in the fact that the enduring wisdom of the Catholic Church, intelligible to all people of goodwill, is truer, and better, and more beautiful than any alternative,” he said.

“Share it lovingly and with the serene confidence that through the Risen Christ and the intercession of his Blessed Mother, all things are possible, and we shall prevail.”

Editor's note: The full text of the Cardinal’s talk is available at the Archdiocese of Toronto website, here.