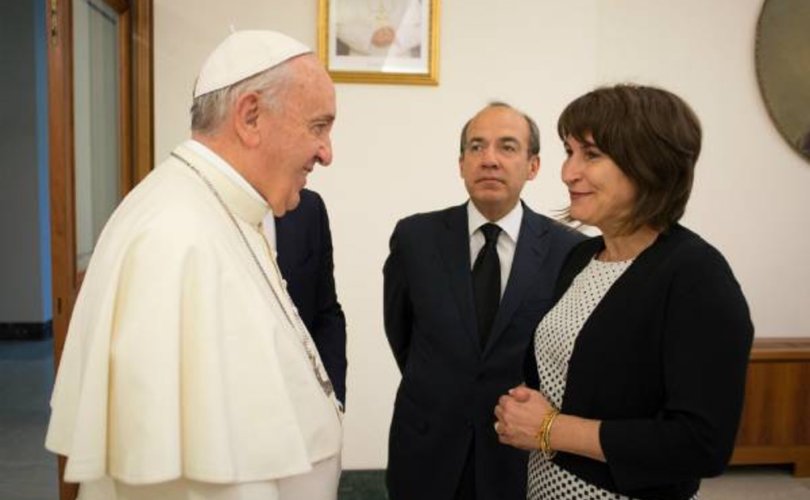 VATICAN CITY, January 26, 2018 (LifeSiteNews) – Vatican officials are not backing down from awarding a leading Dutch abortion activist a pontifical honor, nor do they plan to do additional vetting or change their procedure of exchanging such diplomatic honors in the future.

Controversy arose earlier this month when leading abortion activist Liliane Ploumen displayed on Dutch television a pontifical honor bestowed on her during a visit to the Vatican in June 2017.

Ploumen boasted that she had received a “high distinction from the Vatican, from the Pope,” in a video broadcast.

C-Fam's Austin Ruse noted that while the award is the highest papal honor given by the Vatican, “Ploumen, who has identified as Catholic, is not considered a Dame of the Order of St. Gregory by the fact that she received the medal bearing his name. To be a Dame in the Order, she would have gone through an investiture ceremony with a Bishop.​”

“An official would not say whether better vetting procedures would be implemented in the future to prevent it happening again,” reports the National Catholic Register’s Ed Pentin,  “insisting instead this was ‘a very traditional procedure’ for such an ‘historic occasion’  and was really meant as a way of ‘honoring the king.’  It is something that ‘has been done many times in the past for other visiting heads of state.”

“The source added the honor was no different to someone ‘going to visit someone else’s house as a guest, and who comes with companions,” continues the report.  “One shows a minimum amount of respect to whom he brings.’”

Last week Paloma García Ovejero, deputy spokesperson of the Holy See Press Office, said:  “The honor of the Pontifical Order of St. Gregory the Great received by Mrs. Lilianne Ploumen, former Minister of Development, in June 2017 during the visit of the Dutch Royals to the Holy Father, responds to the diplomatic practice of the exchange of honors between delegations on the occasion of official visits by Heads of State or Government in the Vatican.”

Ovejero insisted that the award, “is not in the slightest a placet (an expression of assent) to the politics in favor of abortion and of birth control that Mrs Ploumen promotes.”

Critics maintain, nevertheless, that the optics remain troubling and that awarding a high honor to Ploumen continues to remain a grave concern.

Holland’s Cardinal Wim Eijk, a member of the Pontifical Academy for Life, carefully distanced himself from the controversy last week, saying he had no part in the Vatican’s action.

According to a joint report filed by OnePeterFive and The Lepanto Institute, which broke the story, “The SheDecides initiative came in response to the funding gap for “family planning” facilities around the world created after U.S. President Donald Trump reinstated the Mexico City Policy, which blocks American federal funding for NGOs providing abortion services. Within six months, SheDecides — which has the support of 60 countries — had received pledges totaling $300 million (USD).”

All this occurred within the months immediately preceding Ploumen’s reception of the Vatican Award in June 2017.

“It’s difficult to be dismissive of Ploumen’s award as a simple oversight,” a OnePeterFive / The Lepanto Institute report pointed out, “which lends some Vatican watchers to wonder if perhaps (Ploumen’s) bold claims about the award being confirmation of her work might have some truth to them.”