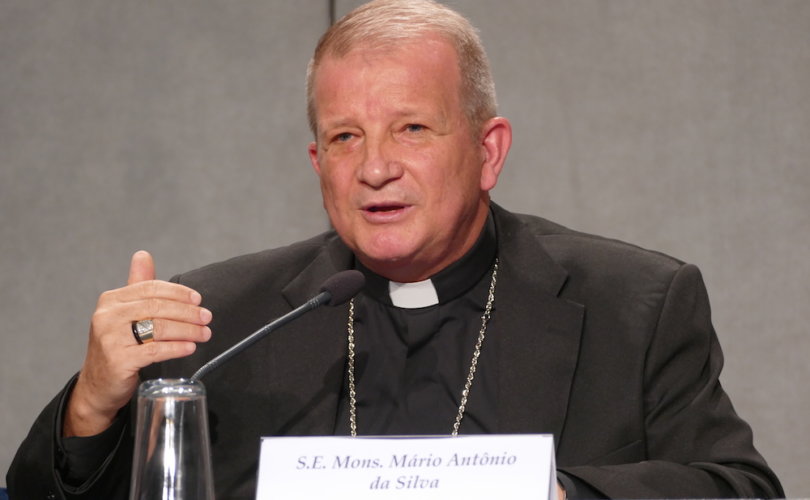 ROME, October 19, 2019 (LifeSiteNews) — Amazon Synod representatives on Friday sought to downplay concerns over the pro-abortion Ford Foundation providing multi-million-dollar grants to key synod groups, while LifeSite has learned that news of the funding caused tensions to rise inside the synod.

The question was a follow-up to the National Catholic Register’s Oct. 17 report that a missionary council for indigenous people (CIMI) which co-founded REPAM and has close ties to the Brazilian Bishops’ Conference, received $2 million in grants from the American far-left foundation.

A look at the Ford Foundation website also reveals that Cecile Richards, former president of Planned Parenthood Federation of America, has been on its Board of Trustees since 2010.

Bishop da Silva told reporters that, “as Christians and Catholics, we defend life from conception to natural death, so we’re against abortion.”

He said the Church in Brazil is therefore “of course concerned about the way investments that come to various entities are used,” but said the funds received by CIMI and REPAM for the Amazon are “used to promote life” and to “promote the lives of women, children, pregnant women, families and the elderly.”

The vice-president of the Brazilian bishops’ conference said he was unaware of “donations made by various foundations” such as the Ford Foundation but said organizations like CIMI “promote life.”

The Register reported that “from 2006 until 2018, the Indigenous Council of Roraima, a local branch of CIMI covering Bishop da Silva’s region, received $1,164,906 from the Ford Foundation.”

Mr. López in turn said that REPAM is “a network, not an institution,” and consequently “doesn’t have its own resources.”

The statement appears to contradict that of CIMI president Archbishop Roque Paloschi, who told journalists at Thursday’s presser that “REPAM’s resources belong to REPAM and CIMI’s resources belong to CIMI.” None of CIMI’s or REPAM’s financial records and expenditures are accessible to the public.

Lopez suggested that reporters “write a letter to Cardinal [Claudio] Hummes,” the president of REPAM and general relator of the synod, “for more information” on whether it receives such funds.

He added that this is a “pro-life synod” and that the synodal conversion process pushes us to look at life that is “at stake, that is endangered” and to recognize that “everything around us is life.”

Interestingly, both Bishop da Silva and Mr. López were wearing the black ring, symbolic of certain strands of Liberation theology, that was presented to Pope Francis during the Oct. 4 ceremony in the Vatican gardens, as shown in the photos below.

Visibly irritated, Paolo Ruffini, prefect of Vatican communications, interjected that while he is not familiar with the financing process of the Ford Foundation, “as a Christian and as a Catholic, I think it is good that the money goes to a good end.”

Ruffini retorted: “I would ask you: do you think it was better for the Ford Foundation to use this money for other, possibly non-Christian ends?”

At #SinodoAmazonico #AmazonSynod Presser; Paolo Ruffini, Prefect for Communications, angry about questions on pro-abortion Ford Foundation's funding of Cimi, disdainfully says “I'm asking you, is it better for the Ford Foundation to use that money for non-Christian purposes?” pic.twitter.com/jZODWjQVbY

Commenting on Friday’s press conference, one observer close to the synod said: “In other words, it doesn’t matter where the money comes from. What matters is how we use it. Can we take money from the mafia?”

All is not well in the synod hall

But while synod representatives presented a somewhat calm front in the press hall on Friday, synod sources have told LifeSite that all is not well in the synod.

LifeSite has learned that news of Ford Foundation funding caused tension among a key group of high-ranking synod participants on Thursday, forcing private discussions to run late into the evening.

Several cardinals allegedly expressed their consternation, with some asking why REPAM organizations were accepting financing from the American far-left foundation when they were already well financed, in large part through the German Church.

Objections were also allegedly raised that REPAM was taking the synod “too far” and was “going beyond” the direction indicated by Pope Francis’s 2015 encyclical, Laudato Si'.

Bishop: ‘I denounce this disgusting cooperation’

News of the Ford Foundation sparked a strong denunciation on Twitter from one U.S. bishop.

Bishop Joseph Strickland of Tyler, Texas called it “disgusting” and called on Catholics to join him in denouncing it.

“As one Catholic Bishop I denounce this disgusting cooperation with evil & urge every believing Catholic to join me, we are morally bound to speak for the voiceless unborn children,” he wrote.

As one Catholic Bishop I denounce this disgusting cooperation with evil & urge every believing Catholic to join me, we are morally bound to speak for the voiceless unborn children……Pro-Abortion Ford Foundation Major Funder of Key Synod Organizations https://t.co/IIoEQXfiRH

Uncertain about where the truth is? Follow the money!!! Planned Parenthood is evil and anti-life. Money associated with PP is blood money extracted from the lives of unborn children who have been slaughtered & their bodies sold to the highest bidder. Diabolical! https://t.co/qr0WeTgX6k

Monday, Oct. 21, marks the beginning of the third and final week of the Amazon Synod.

This article was updated at 16:30 local time (Rome) to reflect that tensions in the synod were among a key group of high-ranking synod participants, including several cardinals, rather than in the general assembly.