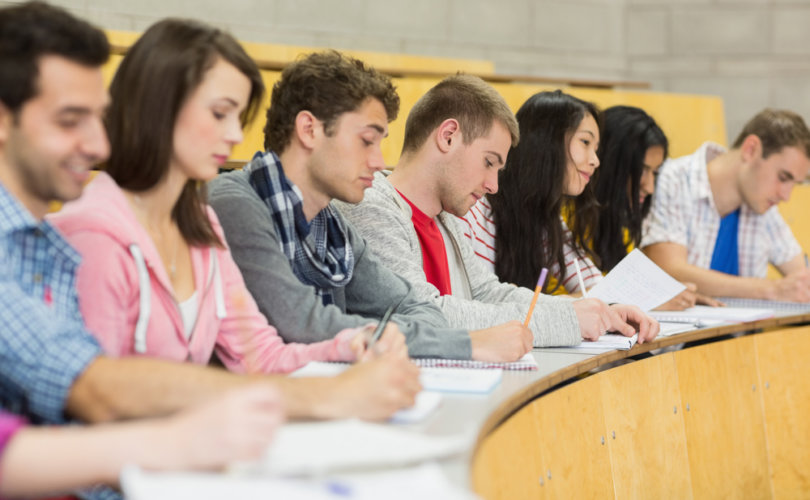 May 17, 2016 (Cardinal Newman Society) — When fostering dialogue with other viewpoints, Catholic universities must be clear on the truths of Church teaching, and should strive to lead others to that truth, said Father Bechina, FSO, undersecretary of the Vatican Congregation for Catholic Education.

“[T]here is no progress in dialogue, no progress toward truth, no intellectual progress, if we do not have clear standpoints,” Fr. Bechina said in an interview with Vatican Radio.

“A good Catholic university should have a clear vision, mission and standpoint which should be grounded in its belief in the Gospel, in Jesus Christ,” he added.

Having clear positions grounded in the Gospel, Catholic universities should “respect that there are other opinions and then engage with them,” Fr. Bechina said, with the goal of “show[ing] that we have good reason for what we [as Catholics] believe.”

This point has been repeatedly emphasized by The Cardinal Newman Society in recent months: the Catholic university should be a place of seeking truth and leading students to the truth, particularly in areas of faith and morality.

Too often Catholic universities cite “dialogue” and “academic freedom” as reasons for bringing controversial speakers to campus and giving them platforms to present ideas that contradict Church teaching without opposition.

In March, Georgetown University defended Planned Parenthood President Cecile Richards’ visit as an opportunity for a “free exchange of ideas.” As was expected by many, there was no exchange of pro-abortion views and Catholic teaching on human dignity, only an opportunity for Richards to advocate for abortion, contraception and sterilization during her lecture.

The University of Notre Dame also hosted a guest speaker recently who used her platform to advocate for abortion. Former Texas State Senator Wendy Davis spoke approvingly of abortion and even defended the abortion of her own child during her lecture to students, which was held on April 4, the Feast of the Annunciation. The lecture was co-sponsored by the Notre Dame Department of Gender Studies.

Citing the examples of Richards and Davis — and well as the scandalous commencement honors of abortion advocates former President Bill Clinton at Loyola Marymount University and Vice President Joe Biden at the University of Notre Dame — 31 Catholic and pro-life leaders recently joined in a statement urging Catholic colleges to “stand firm in defending truth.”

“There is no sensible appeal to ‘freedom of speech’ or ‘academic freedom’ to justify university-sponsored events or activities that hold up opponents of known moral truths for special honor, as if falsehood and immorality are to be celebrated and not firmly rejected,” they said. The signers of the statement added: “Moreover, there is no ‘freedom’ in presenting lectures that include one-sided advocacy for evil; the university’s free choice to present such lectures has the consequence of binding young people in the chains of falsehood and sin.”

In Ex corde Ecclesiae, the Church’s apostolic constitution on higher education, Saint John Paul II clearly stated that the Catholic university had a responsibility “to consecrate itself without reserve to the cause of truth” and even at times to “have the courage to speak uncomfortable truths which do not please public opinion, but which are necessary to safeguard the authentic good of society.”

This vision for dialogue and the pursuit of truth, which Pope Benedict XVI further illuminated in Caritas in Veritate, is rooted in the Gospel, Christ and the teaching of the Church, Fr. Bechina explained.

“This dialogue has not really been taken up. And I wish that more universities would take up this dialogue,” he said.

Engaging in dialogue divorced from truth leads to confusion among students and can produce an environment where religion and morality is considered an afterthought to academic and institutional pursuits.

Catholic universities would be wise to pay attention to what Pope Benedict XVI has to say on the matter, Fr. Bechina continued. The former Holy Father pointed out that “religion that is not helping develop a person to be better, to become more human, cannot be a real religion,” and that “if a religion is just for the private sphere and is no longer serving the common good, then this also [shows] that it cannot be a true religion.”

So has the pursuit of “dialogue” and “academic freedom” at Catholic universities missed the mark? Is there hope for recovery or is religious identity and freedom on the wane?

There certainly seems to be a decline in religious freedom in recent years, Fr. Bechina said. While freedom of the individual and freedom of expression has grown, the same freedoms have not been guaranteed for religious institutions like they were in the past. In particular, the freedom to express one’s faith, to express religion in the public sphere, has been compromised, he said.

The Catholic university should never be a place where truth is comprised, rather it should be a “safe place” where the Church can fulfill and “develop its mission in an intellectually honest way and in dialogue with other opinions,” Fr. Bechina stated.

“Truth, as well as faith, cannot be without freedom — and this is a key [idea in the work of] Joseph Ratzinger and then Pope Benedict [XVI], that we do not have to have fear of truth, and that truth can only be found in this kind of freedom,” he said.